New Gene-Edited Tomato Could Be Huge for Urban Agriculture

Researchers have developed a new kind of tomato that grows in bunches and smaller spaces. 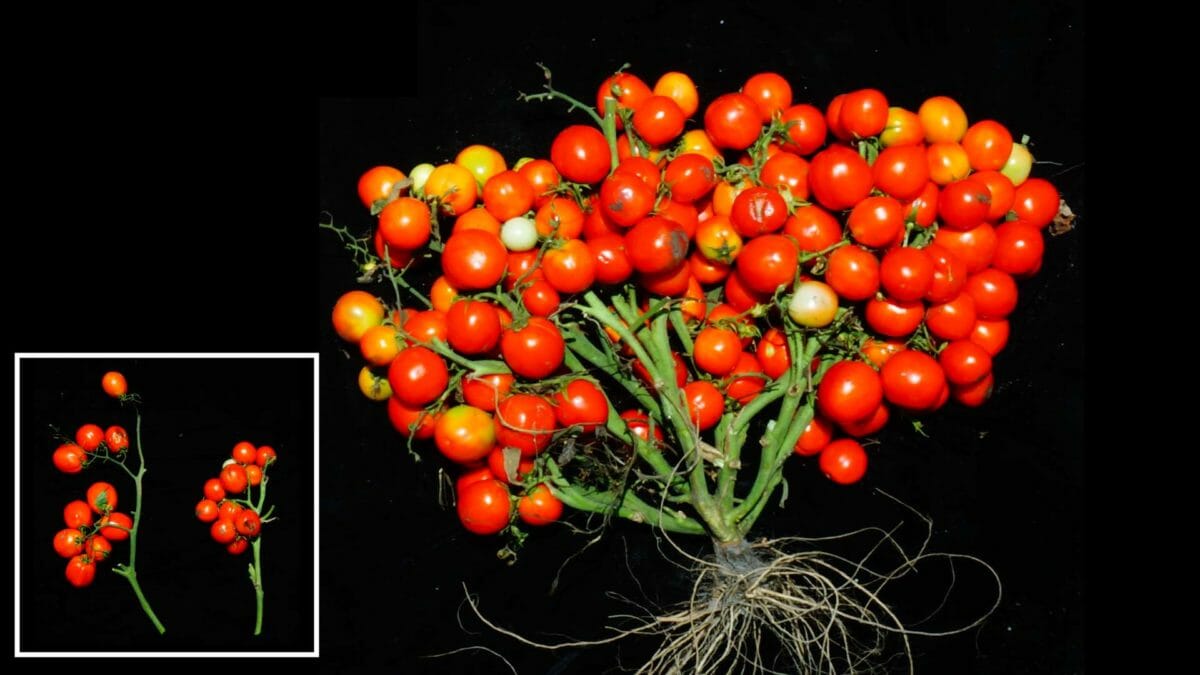 A newly engineered tomato could help solve how we’re going to feed the world’s hungry in the future.

As shifts in climate will change the way we farm our food, researchers are busy trying to figure out innovative ways and places to grow crops. Urban farming could be a big piece of that puzzle, but a lack of space to grow crops in America’s cities constantly daunts urban farmers. This new tomato—developed by researchers at Cold Spring Harbor Laboratory in Long Island—could help with that problem.

“We do need to be thinking about how we can be producing food in new ways. It’s still very unclear how the Earth is going to reach a new equilibrium in terms of climate and environment,” says Zachary Lippman, who leads the lab. “That could have dramatic consequences for where we’re growing most of our major crops right now, including tomatoes.”

Using a process called CRISPR gene editing, researchers engineered cherry tomatoes that grow in bunches and with smaller stems, making them optimal for confined spaces. They grow faster than normal tomatoes and are ready to harvest in just 40 days. CRISPR—an acronym for the long-winded Clustered Regularly Interspaced Short Palindromic Repeats—is a method that allows scientists to edit a genome without adding genes from another species.

The new tomatoes—for which researchers don’t have a name yet—have much shorter stems and don’t grow on the long vines on which tomatoes usually grow. Researchers have dubbed the type of plant a “triple determinant variety,” as they used three gene mutations to engineer them. These include genes that affect when the plant stops growing, flowering and fruiting, as well as a gene that controls the length of stems.

Beyond discovering a tomato that can efficiently grow in a limited climate-controlled space (and one which researchers say tastes great), Lippman says his findings could be applied to other plants and fruits. He says that the genes his team has targeted, and the traits they modify, are applicable across essentially all flowering plants.

In 2018, the USDA announced that it would not be regulating genome-edited crops, leading to concerns among consumer advocates. Lippman says he understands the concerns some have about genetically engineered foods, as the technology can be difficult to understand. But he says that such genome editing is simply speeding up the gene mutations that happen in nature. “We are eating mutations every day, all the time,” he says. “That’s the reason we have the food that we eat. And genome editing is about making mutations in genes so we can enhance nature’s diversity that we’ve already been exploiting.”

It’s not clear if and when these tomatoes will be available for the public to buy at grocery stores, as Lippman says his work was licensed by a startup called Inari Agriculture, which will decide whether it wants to go through the process to market the tomatoes commercially.

I can’t help wondering what the nutrient content of this all-fruit, no-leaves tomato could be. To feed the world we need good healthy food, not just lots of food.

Popular
This Ugly Fish Could Be The Future of AquacultureLindsay Campbell
Look Out, Bone Broth; Mushroom Broth Might Be Even More MagicalMichelle Rabin
7 Smokable Plants You Can Grow That Aren’t MarijuanaBrian Barth
6 Differences Between Llamas and AlpacasAndrew Amelinckx
How to Incubate Chicken EggsBrian Barth
Explore Modern Farmer
Related
Environment
In a Warming World, Canada Could Become a Breadbasket—But Not Without CostsDan Nosowitz
How-To, Plants
How to Plant a Fruit TreeBrian Barth
How-To, Plants
Fruit Trees in the NudeBrian Barth
Food & Drink
The Secret to a Plant-Based Pizza That Actually Tastes GoodFrank Giustra
Farm Favorites
Read the latest reviews on our favorite products.
Immigrants Feed America