Literally Nothing Goes to Waste at This London Restaurant

Here is a shocking statistic for you: Up to 40 percent of food in the United States goes uneaten. That is on average 400 pounds of food per person every year.

There are many reasons for this, but the least defensible are grocery stores’ quality standards that over-emphasize appearance. All-you-can-eat buffets, laws requiring restaurants to throw away food once it’s served (even if it’s untouched) and poorly planned grocery shopping all play a role in seeing much of our food end up in landfills.

I recall my mother telling us it was a sin not to finish what was on our plate and that there were starving children all over the world that would be grateful for any kind of food. To this day, I still believe it’s sinful to throw away food.

Consider all the resources required to bring food from the farm to your table: water for irrigation, land for planting, fuel for powering harvest and transport vehicles. Did you know it takes 1,799 gallons of water to produce just one pound of beef? And yet so much food in America goes to waste. We need to find a better way.

It was with these facts in mind that I found myself at a restaurant that is trying to change the way we consume food. I was in London recently and had a Sunday afternoon to kill in between meetings. I asked our editor to suggest some interesting food experiences for me to try out. He suggested I go visit Silo Restaurant, the UK’s first zero-waste restaurant. So, I took a 45-minute cab ride to Hackney in east London to have a look for myself. Silo was a bit difficult to find. It was in a walled-off industrial park-like setting next to what looked like a pop-up nightclub that was still blaring music at 11:30 a.m. A few staggering patrons were still quaffing some beers outside the entrance and one fellow was unabashedly relieving himself into an open barrel.

My apprehension fell away as soon as I entered the restaurant. It was a clean warehouse-style decor and everyone attending to me was pleasant.

I sat down at the bar and a young manager by the name of Martina was kind enough to answer some questions as I ordered my food. The restaurant launched in November and was the second Silo location by chef Douglas McMaster, who had previously worked in some gourmet restaurants in Australia. The original Silo restaurant opened five years ago in the seaside town of Brighton.

McMaster had become disillusioned by the amount of food waste he witnessed at elite restaurants. He developed a view that waste was a function of our obsession with perfection. He believes perfection does not exist and that food can be brilliant without being perfect. He only works with local organic farmers and has everything delivered in recyclable containers. There is no packaging in any food products he uses. If a food item can’t be delivered without packaging, his team simply makes it themselves. The restaurant even has its own mill to make flour from locally produced grains.

It also has its own compost machine to process food scraps, and it returns the organic material back to the farmers to use as fertilizer.

McMaster was inspired by the book Zero Waste Home, and he wants to promote the idea of more sustainable lifestyles. He hopes that by making his food attractive and delicious, his restaurant will help inspire people to change their habits. McMaster believes that you can’t push people to change their habits through fear-mongering or by being boring. You have to offer them a fun experience. He has said in interviews that launching his no-waste restaurant was stressful because the industry has supply chains that use a lot of processing and packaging. But once he got his systems in place, things became easier.

It all sounded very convincing. But, as I have learned over the years, when it comes to food, it’s fine to have a worthy mission, but if it doesn’t taste good, it’s a wasted effort. I recently started a plant-based diet. So I ordered three vegan dishes.

I started with Silo’s multigrain porridge with sourdough miso caramel, poached pear and quince jam. I am not normally a porridge person, but this dish impressed me. 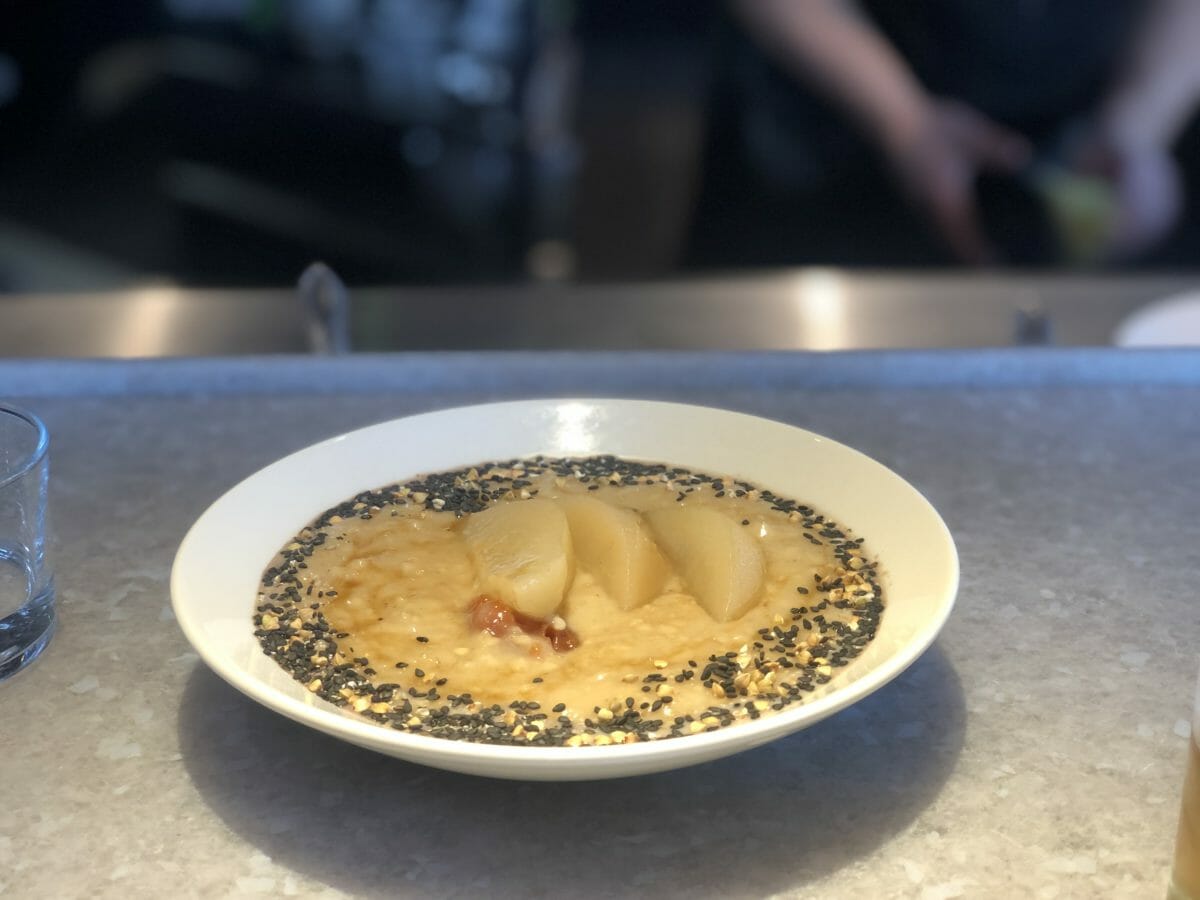 For my second course, I had roasted tempeh with chimichurri and smoked squash. 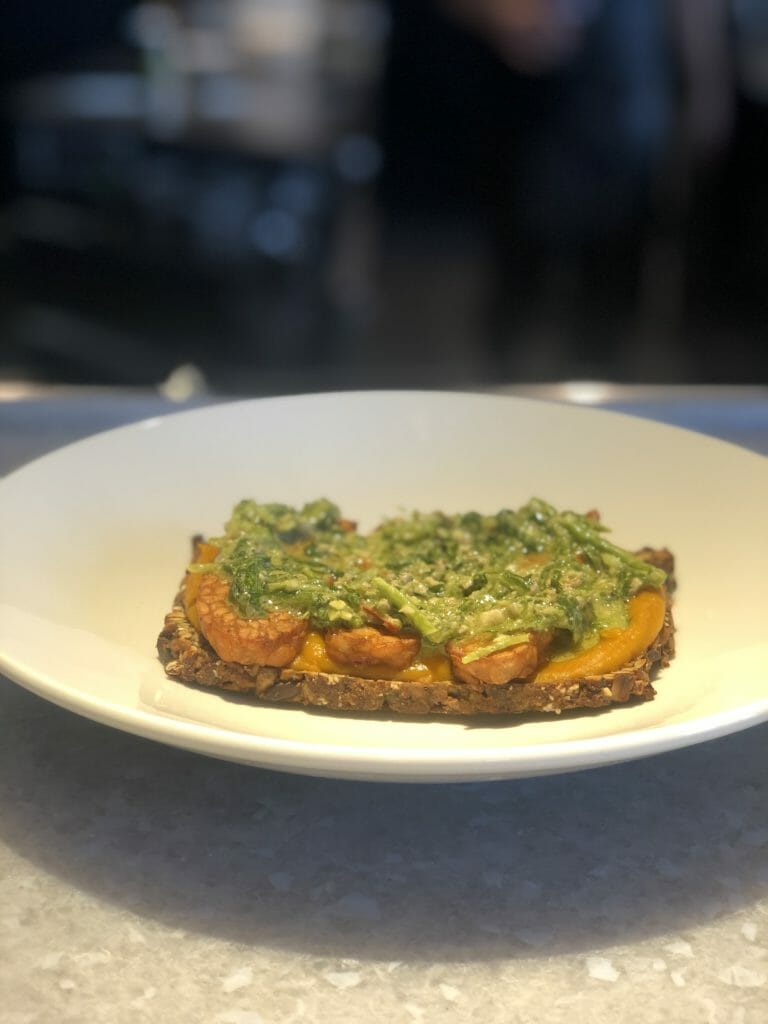 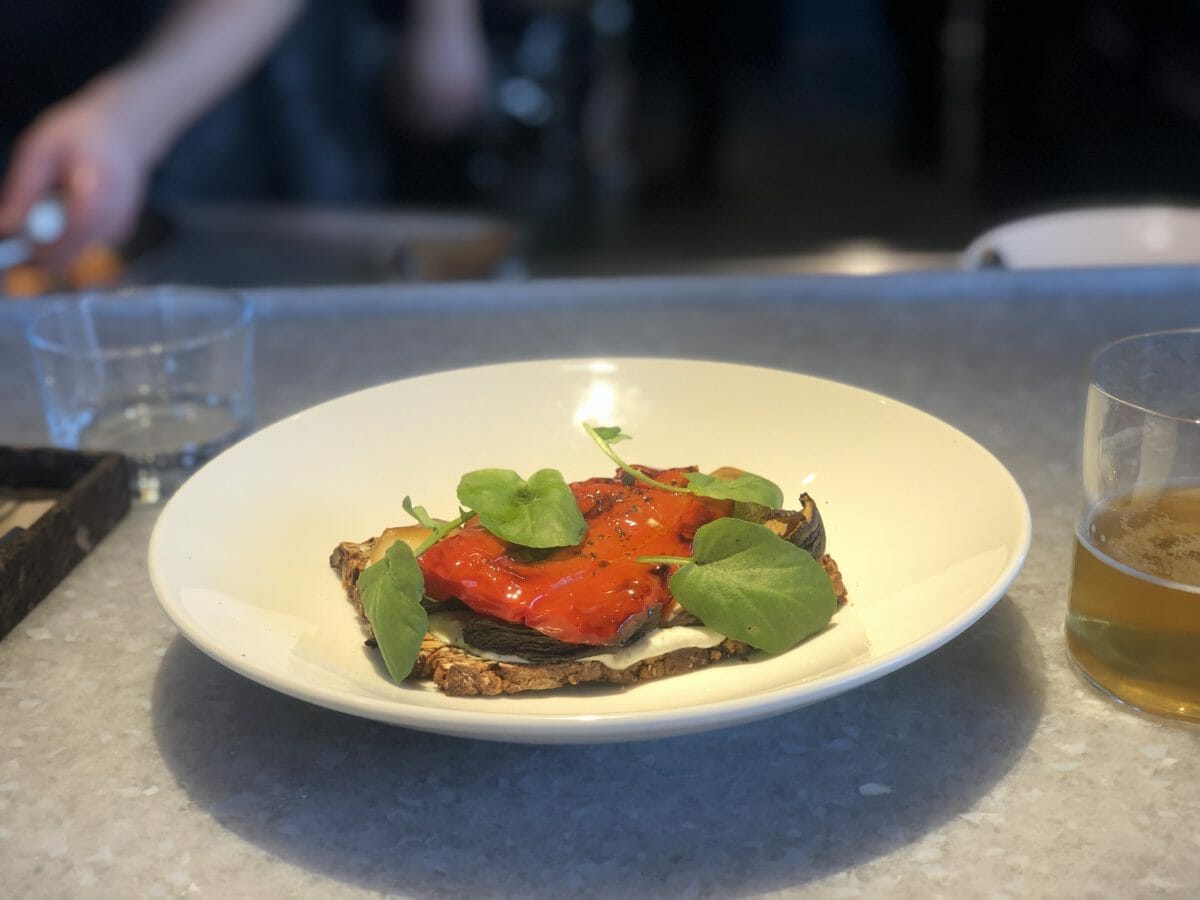 I chased it all down with a Crate lager, which was made in a micro brewery in the same building complex. The oyster mushrooms with red roasted peppers dish was my favorite, but they were all delicious. I was very impressed and recommend making the commute to east London on your next visit.

I left the restaurant feeling grateful that someone was making a statement about food waste. I was pleased to have informed myself. Suffering from jet lag and the effects of a lager, I headed back to my hotel for a well-deserved nap.

This sounded incredible. Next time I visit Hackney (where my grandparents were raised), I will make a point of visiting.

Sounds like great eating and I’ll be there with Barb. However, my last job before retiring for the second time was in a distribution center for a large American grocery chain. A few things I learned are that (1) if you put 100 apples out only the few perfect ones will sell. This is the customers choice and not in the suppliers control. (2) it it is not free to discard unwanted food in fact it is extremely expensive. Food suppliers go to great lengths to avoid it. Much is donated. My company had made large investments in a system… Read more »


Explore Modern Farmer
Related
Features, Food & Drink, Fungi
Could New York Become the Mushroom State?Sara Foss
Food Security, news
Record-Breaking Egg Profits Prompt Accusation of Price GougingClaire Carlson, The Daily Yonder
Features, Personal Essay, Water
The Cold Swim HomeMarcie Callewaert
Books, How-To, Lifestyle
How to Turn Your Garden Into a Business, No Matter the SizeEmily Baron Cadloff
wpDiscuz
We use cookies on our website to give you the most relevant experience by remembering your preferences and repeat visits. By clicking “Accept”, you consent to the use of ALL the cookies.
Cookie settings ACCEPT
Privacy & Cookies Policy