Discovering the Perfect Pizza… in Japan

I like to think I make a pretty great pizza. My specialty is thin-crust pizza done in a wood-fired oven, and I use the freshest ingredients I can find for toppings.

The truth, however, is that making pizza dough is a struggle for me. I am generally not fond of baking. It requires too much science and precision. So I just buy fresh pizza dough at a local deli. No one seems to notice, or care, and the pizzas always taste great regardless.

At least that’s what I thought until a recent trip to Japan. Yes, Japan. Not New York or Italy. While I was on vacation in Tokyo last year, I went to a restaurant in the Mandarin Oriental Hotel called The Pizza Bar on 38th. I ordered their pizza diavola, took one bite, and was immediately transported to some heavenly dimension. The dough was like nothing I have ever tasted before. It had the crispiness you would expect from a Naples-style pizza, but it was light and flaky in a way that reminded me of a croissant.

I immediately started asking questions. When our server realized I was going to dig deep, he excused himself and quickly returned with the executive chef, Daniele Cason, who was raised and trained in Rome. Cason moved to Tokyo a few years ago and it was his idea to open a pizza bar in the hotel’s Italian restaurant. We spoke for a few moments and I asked if I could come back the next day for lunch to learn some of his tricks. He politely agreed, but I could almost see that “who-is-this-guy” look on his face. 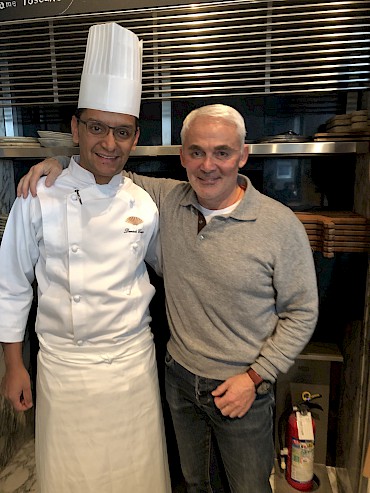 The next day, I arrived 15 minutes early for my reservation and ordered three pizzas: Cason’s favourite, the marinara (tomatoes, garlic, olive oil, and marjoram—instead of oregano), the pizzino (mascarpone, truffle essence, and black olives) and the bufala (buffalo mozzarella, tomato, and basil). As he worked in the kitchen and issued instructions to his sous chef, I began my interrogation. Mostly, I wanted to know about the crust.

It all starts with the quality of the flour, he said. He uses only a particular brand from the Piedmont area of Italy. It’s a family-owned business that still uses a stone mill. And, according to Cason, modern steel mills use heat that kills the nutrient-rich embryo or germ of the grain—something he claims you can actually smell.

Quality of flour aside, I found his method of making dough most interesting. He uses 80 percent water and 20 percent flour, which seems surprisingly wet. The preparation is done in two 24-hour cycles. He lets the dough mixture “ferment” during the first 24 hours, and then he kneads the dough to re-activate the yeast and lets it sit for another 24 hours. His other secret is using a small amount of yeast: 1 gram per kilogram of flour. This makes the crust light and easy to digest. When I pressed the dough with my finger, it was like pressing on a cotton ball. Cason pointed out that his crust is not only crispy around the edges but all the way through.

For toppings, he favours the Puglia region of Italy, where both his San Marzano tomatoes and burrata cheese come from. (The burrata is flown in twice a week). The olive oil he uses is from Sicily. He said the fresh cherry tomato varietals from Japan are the best. And, impressively, he prepares his own anchovies, which is a month-long process.

Once everything is assembled, he slides the pizzas into a perfectly heated oven—190 C on the bottom and 290 C on the dome—and lets them cook for 10 to 15 minutes. By contrast, I like to cook my pizzas for about two minutes in a much hotter oven. I helped devour all three pizzas despite a sushi-making lesson earlier in the day that involved plenty of eating. I had assumed the marinara would be my favourite, but I loved all three.

For dessert, Cason offered us his homemade limoncello. Normally, I don’t touch the stuff, but this lacked the heavy sweetness limoncello usually has. It was made from a Japanese citrus fruit called yuzu and it was delicious.

When I think of Japan, delicious food is often the first thing that comes to mind. But I never would have guessed I would discover my favorite pizza there. Now, I need to buy that special flour, get over my dough-making phobia and attempt to make it myself.

When bread bakers speak of percentages, they don’t mean percentage of the total; they mean percentage of the total flour weight. So an 80% hydration dough is actually about 44% water and 56% flour. That’s still pretty wet. You can’t actually make dough with 80% water and 20% white flour as far as I know; that goes beyond the 175% or so hydration considered “extreme high hydration” even with finely milled whole wheat flours.

What I Learned During My First Year of Gardening
America’s Oldest Continuously Operating Victory Garden
Machine Learning: the Future of Farming
The Art of Urban Permaculture


Explore Modern Farmer
Related
Food & Drink, Labor
The Chocolate Companies Working to Uproot Unfair Labor PracticesEmily Baron Cadloff
Food & Drink
Why Global Food Prices Continue to ClimbAlastair Smith
Cookbooks, Food & Drink
7 New Cookbooks We’re Cozying Up With This FallShelby Vittek
Food & Drink, How-To
6 Ways to Preserve Your HerbsLindsay Campbell
wpDiscuz
We use cookies on our website to give you the most relevant experience by remembering your preferences and repeat visits. By clicking “Accept”, you consent to the use of ALL the cookies.
Cookie settings ACCEPT
Privacy & Cookies Policy