In the Jamaican countryside, farmer-chef duo Christopher and Lisa Binns welcome visitors to Stush in the Bush, the gourmet vegetarian supper club they operate from their 15-acre organic farm in the mountains of Free Hill. By Monica Michael Willis

Tangled vines, showy bougainvillea, and brief glimpses of the Caribbean Sea pass in a flash as we navigate the narrow Jamaican back roads that lead to Stush in the Bush, a vegetarian supper club nestled 2,000 feet above sea level in the rural village of Free Hill. Farmer Christopher Binns and his wife, Lisa, an accomplished chef, host the off-the-beaten-path meals at Zionite Farm, their 15-acre organic homestead. Sited on a mountain ridge, the lush property feels light years away from the touristy seaside resorts in nearby towns like Montego Bay and Ochos Rios, 40 miles to the northwest. Chris meets us at the bottom of the driveway, where we pile into his beefy 4-wheel-drive pickup, the safest option for navigating the steep, bone-rattling journey up the last several hundred yards to the property’s open-air kitchen and dining pavilion.

A laid-back plant whisperer who farms barefoot, Chris, 47, dug the road to the farm himself. He studied political science at university in Canada and worked in tourism before being drawn back to Free Hill and the fertile land that has been in his family for more than a century. Totally off-grid, the farm sustains itself with a rainwater catchment system, solar power, and a propane generator for the rainy season, when thick clouds often block the sun. 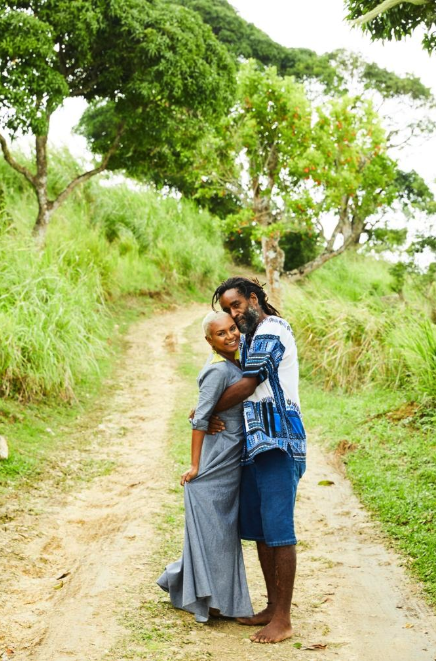 The Binns met when Lisa was vacationing in Jamaica nearly a decade ago.

Chris met Lisa, a former high-school principal in Brooklyn, when she was on holiday in Jamaica in 2009. By all accounts, the connection was immediate—and electric. “I got back home and couldn’t get the Rasta farmer out of my system,” laughs Lisa, who was born in Barbados but raised in the United States. Nearly a year later, with her daughter getting ready for college, the 50-year-old packed up her apartment, said goodbye to New York City, and headed to Chris’s upcountry farm in Jamaica. 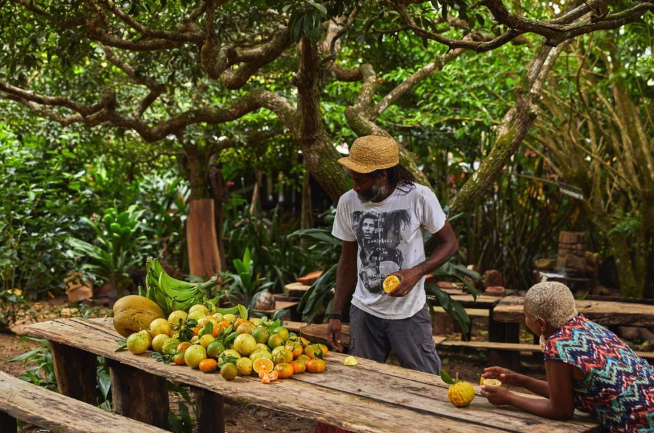 The couple sometimes serves meals in the citrus grove, down the hill from the kitchen and main dining room.

At first, the couple lived in a primitive cabin tucked in a citrus grove. There was no electricity or running water. They ate what they grew, and sold the rest at farmers’ markets. “It was the best time of my life,” says Lisa. They farmed, made connections in the community, and envisioned what they wanted to see happen next on the farm. They were toying with the idea of a bed and breakfast when a local gentleman asked if they’d host a dinner party for him at their farm. That meal turned out to be the couple’s Aha moment.

Things just clicked. Chris liked to farm, Lisa liked to cook. They could work from home, and grow the business at their own pace. According to Lisa, when they started Stush in the Bush (stush is Jamaican slang for fancy), Chris had never heard of arugula or seen a purple carrot. He was, however, willing to plant any exotic vegetable seed Lisa fancied. He now grows tatsoi, watermelon radishes, golden turnips, grapes, pomodoro tomatoes, even capers. 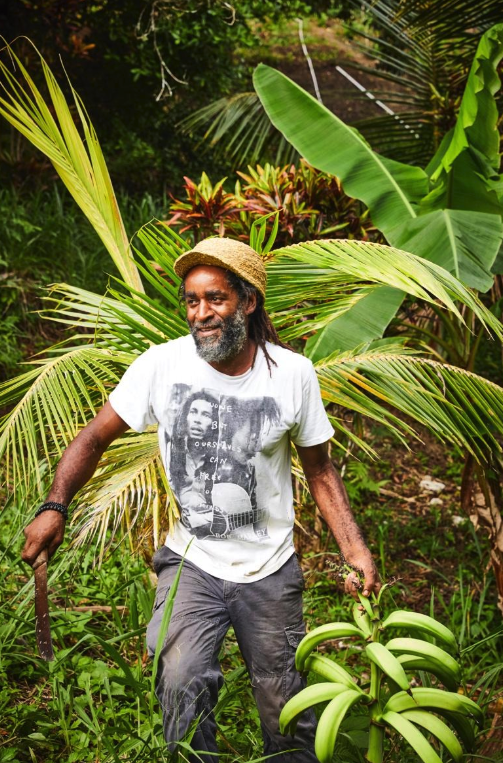 “Agriculture has always been the backbone of Jamaica,” says Chris, a devout Rastafarian. “Food grows everywhere on the island. In other places, people run to the grocery store; here, we turn to a tree.”

“Our whole thing with Stush is sexy vegetarianism,” says Chris, as he points to the beautiful food Lisa has made for the party they’re hosting that afternoon for some island friends.  There’s nothing boring on table, just fresh vegetables and fruit in elegant preparations, like paper-thin slices of beets on a bed of just-picked arugula and a spicy tomato soup Lisa will pair with a rosemary quick bread made with Red Stripe, Jamaica’s iconic lager.

Set up like an agroforest, the farm supplies just about everything Lisa could want, says Chris, gesturing to the fruit trees, herbs, and ornamentals that grow up to and alongside rows of baby arugula, cilantro, peppers, beans, radishes, and carrots, among others. Culinary herbs and medicinal plants, like oregano and aloe, flourish next to banana and mango trees thick with fruit. There are starchy plantains and sweet potatoes as well as coconuts, pineapples, and ackee, the national fruit of Jamaica.

The business evolved from there. “With Stush in the Bush, we’re focused on growing community and really beautiful produce for our dinners,” says Lisa. Chris concurs: “What we do isn’t just about food and filling people’s belly. It’s about showing the connection between the land, the food we eat, and, in many ways, our well being.” 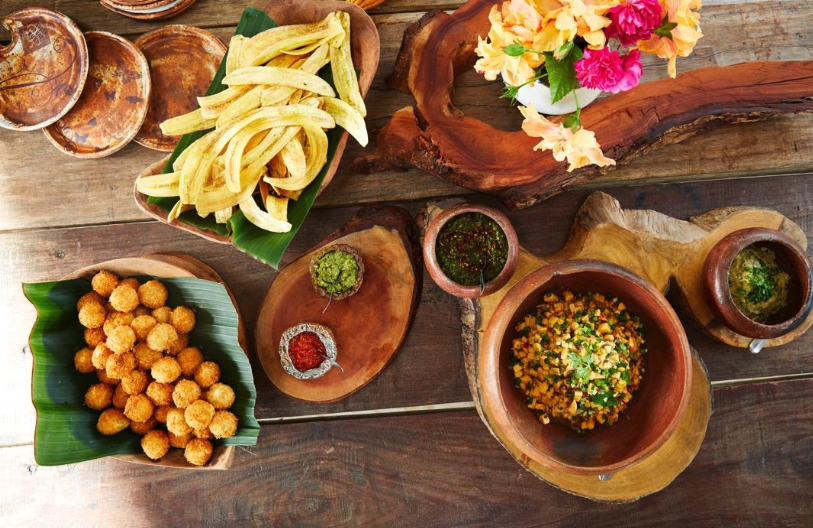 Appetizers at a Stush in the Bush dinner might include (clockwise from top) crispy plantain chips, plantain ceviche, deep-fried yam-pineapple croquettes, plus homemade dipping sauces. Chris, a sculptor, made the wood trivets from hardwoods culled from the farm.

“The farm’s a living thing. No concrete, just plants and sky,” says Lisa, as her friends start arriving. In her element as a hostess, Lisa serves a seasonal menu that includes cucumber-basil lemonade spritzers, crispy fried plantain chips and pineapple-studded croquettes, garlicky varicots verts, and a sweet-potato gratin smothered in a cheesy cashew cream sauce. Her guests didn’t come empty handed: Fellow farmers Ruth Mitchell and Byron Walker of Ruby Goat Dairy bring fresh-made feta to add to the beet and arugula salad, and Lisa’s daughter Tyler Gibbs Faust, herself a talented chef, slow roasts oyster mushrooms purchased from a women’s cooperative on the island. For dessert, Lisa serves fluffy, rum-scented beignets that have been drizzled with a sauce made with single-source chocolate from One|One Cocoa, a Kingston, Jamaica, company owned by the couple’s friend Marta Lamolla. “There’s a magical energy here,” says one of the guests, as the evening winds down. “It’s why we love what we do,” Lisa answers. 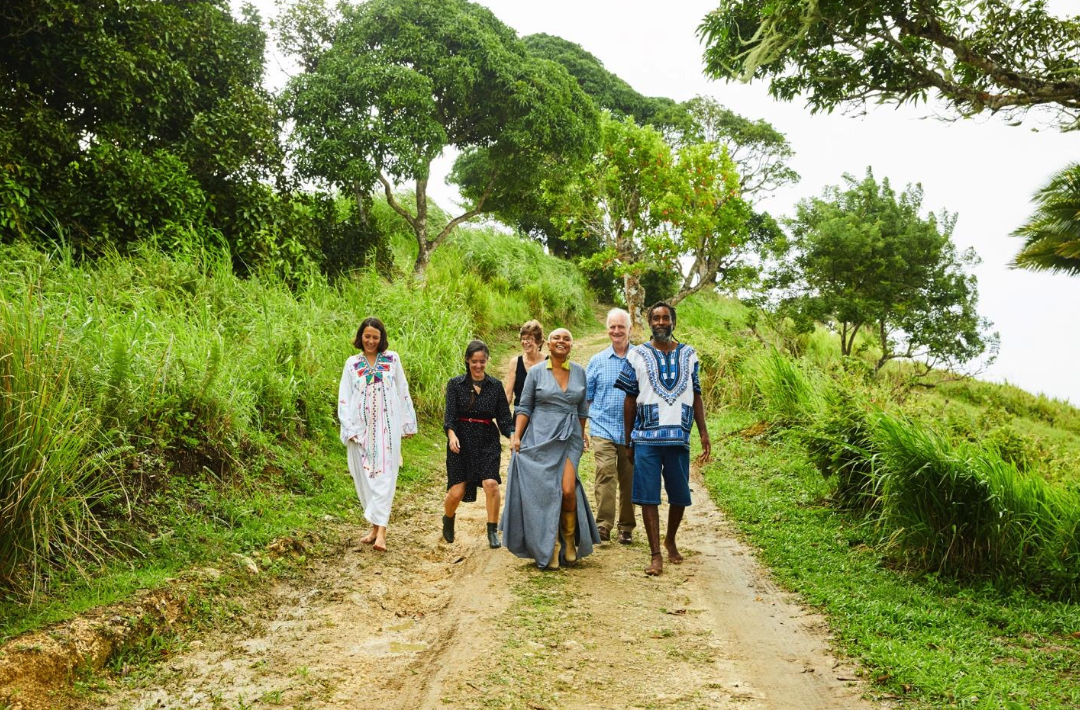 Chris and Lisa Binns (in front) lead some of their island friends on a tour of the farm before dinner.

As long as people want to create memories, Chris and Lisa plan to continue offering the kind of dialed-down experience in Jamaica that helps them do just that. But they don’t plan to stop there. They’ll host their first wedding on the property this spring, and there’ll be more farm dinners and an expanded roster of cooking classes. A family farm share program is also in the works, and Lisa has begun work on a  cookbook.

Neither the farmer or the chef seem daunted by the future. “The first ingredient in everything we do is love and affection,” says Chris. “As long as we’ve got that, and each other, we’ll be just fine.” 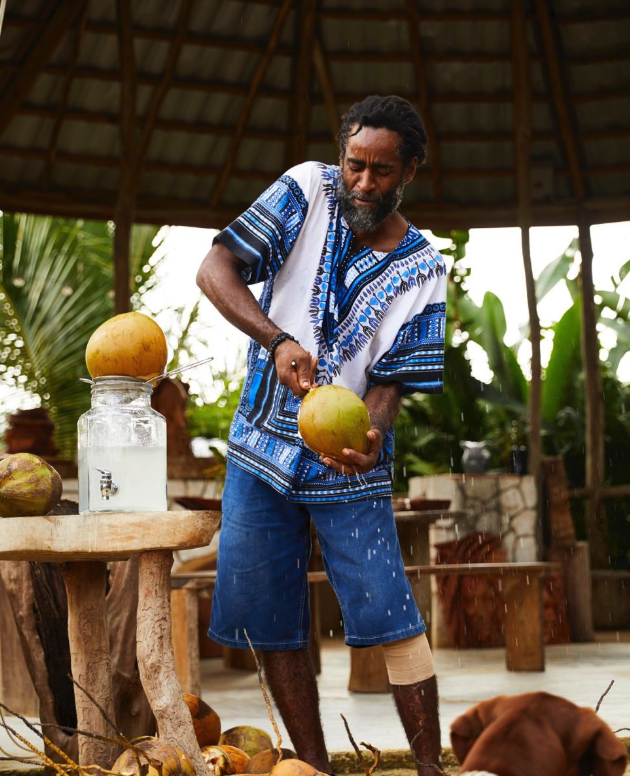 Young green coconuts, known locally as “jelly coconuts,” are used to make the fresh coconut water Lisa chills and serves with lime at her vegetarian suppers.

I can’t wait to sit down with the Binns and enjoy a meal. I have traveled to Jamaica and never felt so excited to return knowing I can experience this family’s gift of love. Congrats to you….

lovely article on Lisa and Chris in Jamaica

I will be in Jamaica in August 2019 and would love to visit and have dinner. Please forward info on reservations and best transportation options.

Will come one day and try. Ruth and Byron are good friends of ours.

Fantastic!
A different kind of experience, kind of like Zimbali from farm to table❤️
Would love to experience!

I find this article very informitive.