An amazing convenience, or a desperate sign of laziness? 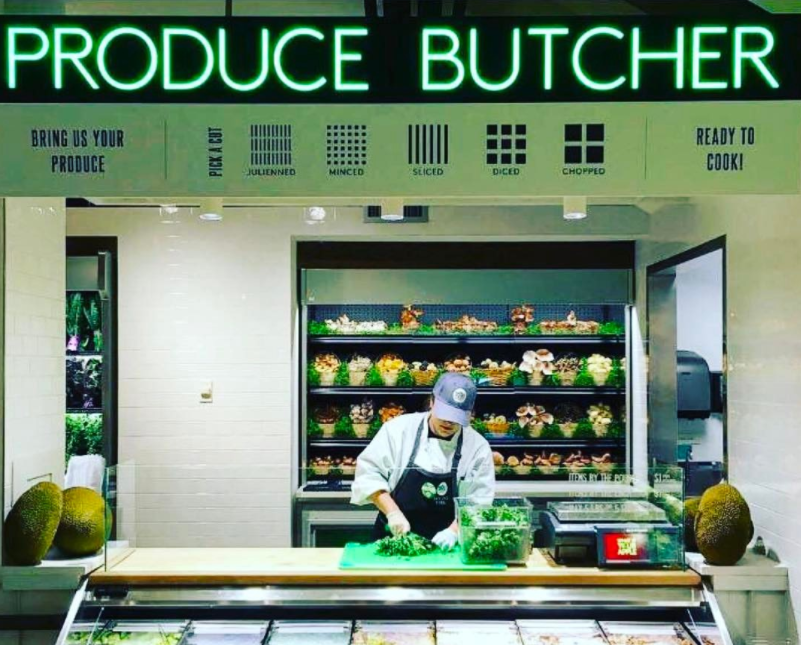 Just take a look at the stats: a Nielsen study found that sales of “value-added” produce – that means washed, bagged, and/or chopped (but does not include frozen stuff) – is up 7.1 percent for fruits and 8.7 percent for vegetables over the past five years. Pre-prepared meal kits from startups like Blue Apron, which eliminate the need for shopping by including all the necessary ingredients for a single meal, have taken off, and are expected to generate $1.5 billion in sales in 2016 (the figures aren’t quite in yet). This is all to say that while Americans are cooking more, convenience and speed are still priorities.

Whole Foods’ newest outpost, near Bryant Park in Midtown Manhattan, opened on January 28th with something never seen before in a Whole Foods: a produce butcher. The idea is not too far off from, say, a seafood butcher: you pick out at item, and the butcher prepares it the way you’d like. On the other hand, seafood butchers usually don’t charge extra (and requires a bit more skill if we’re being honest), while the produce butcher charges either a dollar per pound or, for items less than a pound, a dollar per individually priced item.

The new Whole Foods produce butcher will perform, according to its signs, only a few types of “butchering”: a julienne (long, thin matchsticks), mince, dice, chop, and slice. Strangely, the trendy “spiralize” method of turning vegetables (zoodles!) into long noodle shapes is not included, possibly because, well, Whole Foods already offers pre-spiralized produce.

While this might be great for folks with disabilities or who have trouble handling a knife on their own – say, someone with arthritis – the additional fee might make it cost prohibitive. As a matter of fact, Whole Foods also offers a range of pre-cut fruits and vegetables already, from pre-cubed squash to already chopped fruit salads. It might end up being pricier to have the produce butcher cut up produce for you, but the food will be fresher – nice for people who want to head home and cook immediately.

Response to the produce butcher has ranged from “PURE happiness awesome” to “our generation is doomed.” Thoughts?

Editor’s Note: This article was updated on 2/17 with a new headline and additional information.