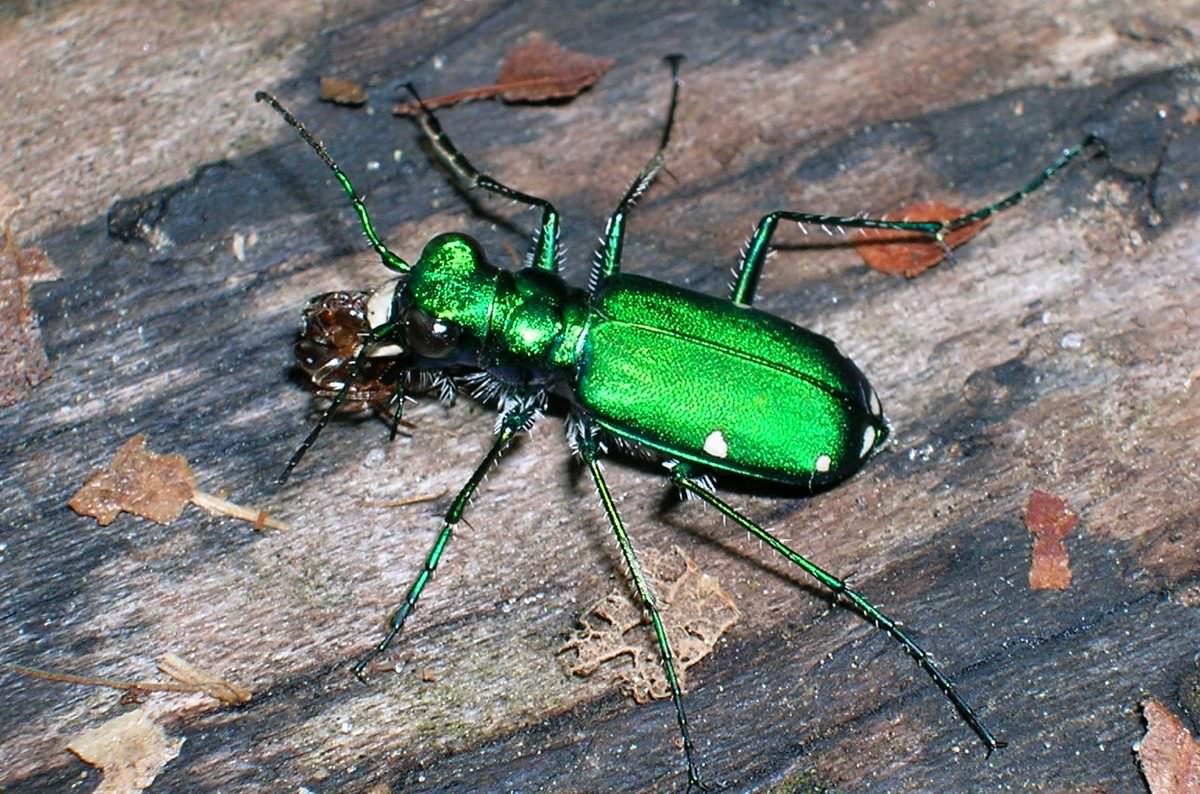 But the precise environmental effects of this kind of seed treatment isn’t particularly well-understood. Evidence is mounting that these treatments can slaughter bee colonies, which has led some, like the state of Minnesota, to call for a ban. Bees, though, aren’t the only unintended target of neonicotinoid-treated seeds.

“A new study finds that, in direct contrast to this long-standing belief, neonicotinoid-treated seeds do in fact pose a significant risk to predatory insects like the tiger beetle.”

There has been a long-standing belief among some that the seed-coating treatments do not adversely affect non-targeted insects like the tiger beetle, pictured above. The tiger beetle is a predatory insect, which is a scary name for a bug that farmers should actually love: it feeds on aphids, caterpillars, and slugs, and will even eat the seeds of weeds. Farmers have no reason to want these guys dead, in addition to the fact that killing large numbers of any animal can throw off an entire ecosystem.

A new study from the entomology department at Penn State finds that, in direct contrast to this long-standing belief, neonicotinoid-treated seeds do in fact pose a significant risk to predatory insects like the tiger beetle. The study examined more than 20 different field studies, crunching the numbers in various ways, to find out exactly how these seeds affect predatory insects, and the results are scary: a reduction in predatory insect populations by 10 to 20 percent.

But the study did not find a similar drop in the population of predatory spiders, which have most of the same food sources as the predatory insects. In other words, there must be some another factor than simply less food to result in such a large decrease in predatory insect numbers – and that factor could well the treated seeds.

It’ll take lots more research before we fully understand the impact that treated seeds have on the environment, but this initial research is a bit scary. The tiger beetle is a farmer’s friend!

Popular
The Future of Hay Drying in AmericaLindsay Campbell
How to (Actually) Get Rid of Fruit FliesEmily Baron Cadloff
7 Smokable Plants You Can Grow That Aren’t MarijuanaBrian Barth
When Tractors Invaded D.C.Sam Brasch
Why Global Food Prices Continue to ClimbAlastair Smith
Explore Modern Farmer
Related
Plants
There’s a Pumpkin Fungus Among UsLindsay Campbell
MTMF
How One Organization is Restoring a Community of Black FarmersEmily Baron Cadloff
Plants
Organic Soybean Prices Spike Despite Huge US Soybean ProductionDan Nosowitz
Environment, Technology
The Future of Hay Drying in AmericaLindsay Campbell
wpDiscuz
We use cookies on our website to give you the most relevant experience by remembering your preferences and repeat visits. By clicking “Accept”, you consent to the use of ALL the cookies.
Cookie settings ACCEPT
Privacy & Cookies Policy