Seems like somebody at Monsanto, DuPont Pioneer, and/or John Deere didn't find his cartoon funny. 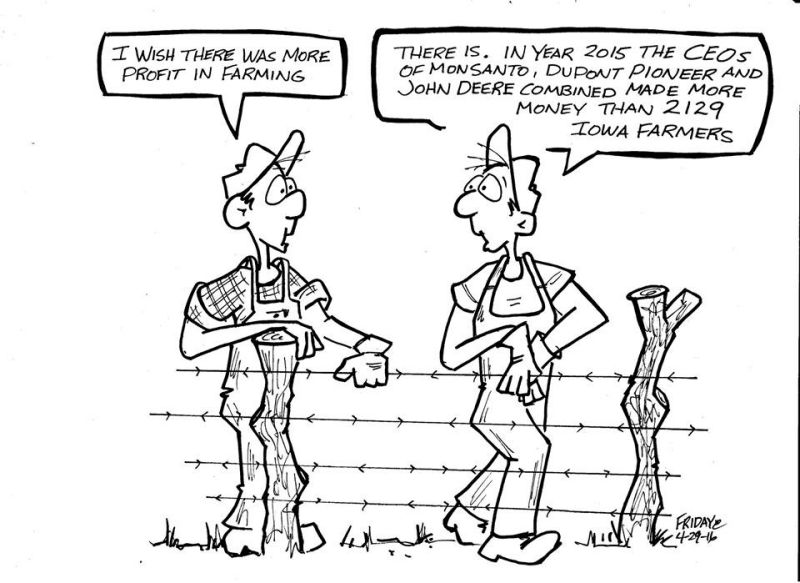 Friday’s series, appropriately titled It’s Friday, included more than 1,000 cartoons. His last one, dated April 29 and shown above, depicts two farmers talking. One says, “I wish there was more profit in farming.” The other replies, “There is. In year 2015 the CEOs of Monsanto, DuPont Pioneer and John Deere combined made more money than 2129 Iowa farmers.”

On April 30, Friday posted a Facebook message revealing that he had been fired due to that cartoon. “Apparently a large company affiliated with one of the corporations mentioned in the cartoon was insulted and cancelled their advertisement with the paper, thus, resulting in the reprimand of my editor and cancellation of It’s Friday cartoons,” he wrote. According to the Des Moines ABC affiliate KCCI, a seed dealer pulled its advertisements as a result of the cartoon.

Friday’s Facebook post has been shared thousands of times and attracted dozens of comments, all outraged, though for various reasons. Some decry the perceived censorship of the publication, while others express anger at the gall of Big Ag companies being offended at such a comparison.

It has not been confirmed which, if any, of the companies mentioned in the cartoon actually complained to Farm News. For their part, Monsanto reached out to direct us to their official response denying involvement in Friday’s firing, saying, in part, “As you may know, we weren’t aware of the cartoon until Monday, May 2 and we had no part in your departure from Farm News. We appreciate anyone who speaks out on behalf of farmers.”

The cartoon may not be subtle, but it is, says Friday, carefully researched, and taps into the rage felt by farmers at the gap in wealth between the corporations who control American agriculture and the farmers (mostly, now, aging) who feel undervalued.