To label or not to label? If only it were so simple. 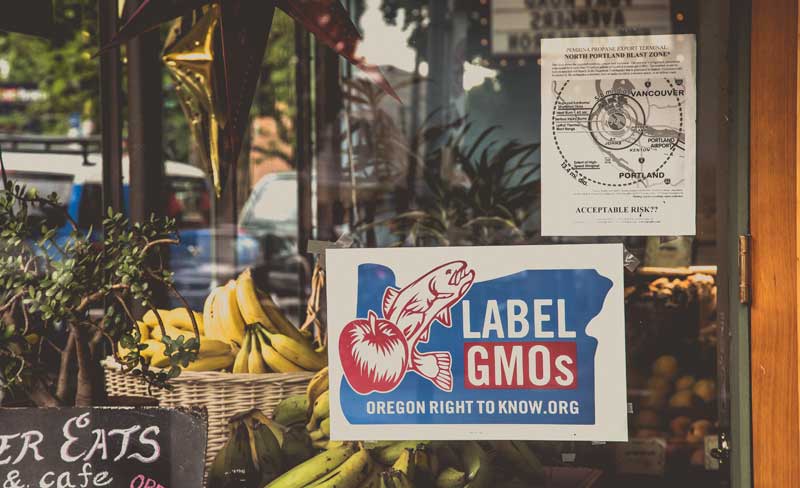 A Senate vote on March 16 tipped the scales decidedly in favor of GMO labeling, which is expected to make its debut on grocery store shelves by the end of this year. Exactly how the process will be regulated is still being hashed out, however.

What happened on March 16?

US Senate bill S.2609 was defeated by a vote of 48-49 (60 votes were required for passage). The legislation, spearheaded by Republican senator Pat Roberts of Kansas, would have set up a voluntary federal labeling program for genetically engineered ingredients. The bill was backed by the Grocery Manufacturers Association (GMA), a trade organization representing the nation’s largest food companies, as well as biotechnology companies like Monsanto, Syngenta, and DuPont.

The legislation was designed to encourage the use of “smart labels,” a GMA-led initiative to include smart phone-scannable QR codes on food packaging, which would link to a website with detailed ingredient information where manufacturers could voluntarily disclose if the product contained GMOs.

Was this the same as the “DARK Act”?

Not exactly, but it was similar. Senator Roberts’ bill was the Senate version of H.R. 1599 – known alternatively as the SAFE Act (Safe and Accurate Food Labeling Act) by its proponents, and as the DARK Act (Denying Americans the Right to Know Act) by its critics – a House of RepresentativeÁ¨s bill intended to establish a national non-GMO certification program to be similar to the USDA national organic certification program.

H.R. 1599 was passed by a large majority last summer, but required Senate approval to be implemented – which has now been denied. The bill included a provision to block states from enacting their own GMO labeling laws, as were recently passed in Vermont, Maine, and Connecticut and are currently pending in 31 other states. The GMO labeling laws of Connecticut and Maine contain a provision that prevents them from being enacted until a certain percentage of other states pass a similar law. The Vermont law, however, does not contain this contingency and is set to go into effect this year.

What is the status of Vermont’s GMO labeling law, and how will it impact labeling on a national level?

In May 2014, Vermont legislators passed a law requiring food products made with genetically engineered ingredients to be labeled as such by July 1, 2016. Because it is impractical for large food companies to create a separate label for all products destined for a single state, Vermont’s mandatory labeling requirement will likely become the de facto national standard, now that federal legislation to preempt state labeling laws has failed.

Following the March 16 vote, four of the largest food manufacturers in the country – ConAgra, Kellogg’s, General Mills, and Mars – declared that they will begin labeling products with genetically engineered ingredients in all US markets, joining the Campbell Soup Company which announced its plans to label GE products in January. Other food companies are likely to follow suit.

While anti-GMO activists see the defeat of Senator Roberts’ bill as a victory, food industry players warn of the potential for chaos if other states implement their own unique labeling requirements, creating a patchwork of rules across the country. Vermont’s law is currently being challenged in court by the GMA, and there is a chance that it could still be overturned by federal legislation in the future.

What are the specific requirements of Vermont’s GMO labeling law?

The rules apply to products sold at retail outlets only – food served in restaurants will not be affected. Some foods will be exempt from the rules, including most animal products – meat, dairy, and eggs from animals fed GE foods do not have to be labeled – as well as all alcohol and foods commonly processed with GE enzymes or bacteria, such as cheese and yogurt. Certified organic foods, “Non-GMO Project” verified products, and any foods with less than 0.9 percent GE materials by weight are also exempt.

All GE food products that are not exempt must be labeled “produced with genetic engineering” in a prominent location on the package in a bold font no smaller than the font used for the ingredients list. There is a six-month grace period to accommodate products with a long shelf life, but after January 1, 2017 manufacturers will be assessed a fine of $1,000 per day for each product found in violation of the rules.

What types of foods are genetically engineered?

The vast majority of soy, corn, and cotton grown in the US is genetically engineered (GE cotton is used for fiber, as well as to produce cottonseed oil for food). GE sugar beets (commonly used as a sweetener) and GE canola (for oil) are also produced on a large scale. All of these crops are used primarily in processed foods – in the form of soy oil and corn syrup, for example.

GE crops produced for fresh consumption are much less common. The biggest one is papayas – virtually all papayas grown in Hawaii are genetically engineered, unless they are organic (though no papayas imported from other countries are genetically engineered at this time). A small amount of GE sweet corn and GE summer squash is also produced for fresh consumption in the United States.

Several other GMO foods have recently been approved by the FDA, but are not yet produced on a commercial scale, including two varieties of potato, one type of apple, and a fast-growing type of salmon – the first genetically engineered animal to be approved for consumption.

Is there any chance that a national mandatory GMO labeling law will be passed?

Yes. Democratic Senator Jeff Merkley of Oregon recently proposed S.2621, the Biotechnology Food labeling Uniformity Act, which would direct the FDA to institute a mandatory GMO labeling program. The bill has the approval of anti-GMO advocacy groups, and is intended to appeal to food manufacturers as well by superseding state-level laws with uniform regulations for the entire country. A date for a vote has not yet been set, however, and is unclear if that will happen before Vermont’s labeling law goes into effect on July 1.