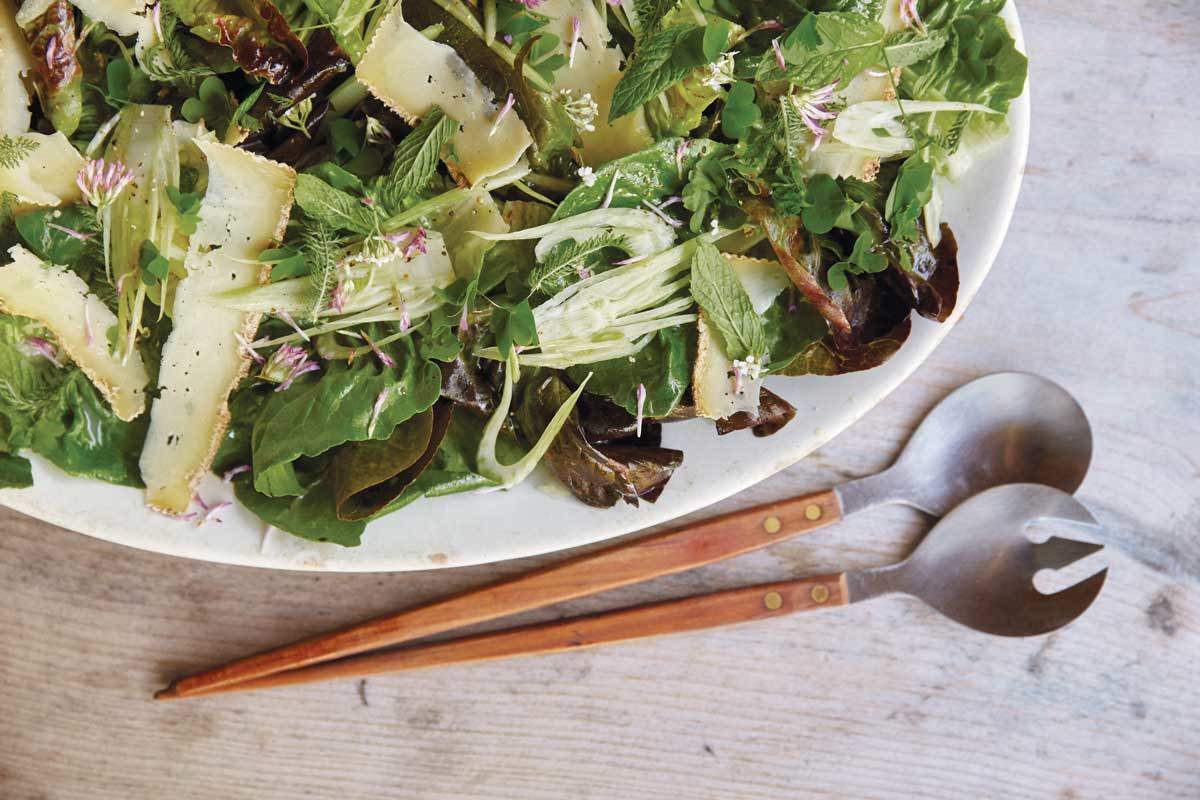 1. In a medium pot over low heat, combine oil and cedar leaves with a pinch of salt and allow to cook for 20 minutes. Remove pot from heat and let cedar-oil mixture steep for 1 hour. Strain through a coffee filter and let cool. Discard solids.

2. In a medium bowl, whisk egg yolk, then slowly drizzle in some of the cedar oil, whisking until mixture emulsifies. When it starts to thicken, drizzle in a tablespoon or two of vinegar, then oil, alternating between oil and vinegar to maintain emulsification, until each is used entirely. Season to taste with salt and pepper. (If vinaigrette separates, simply whisk before using.)

3. In a large bowl, toss lettuces and fennel with vinaigrette and season to taste with salt and pepper. Transfer to a large platter. Using a vegetable peeler, shave cheese over salad and garnish with the foraged greens.

Popular
7 Smokable Plants You Can Grow That Aren’t MarijuanaBrian Barth
How to (Actually) Get Rid of Fruit FliesEmily Baron Cadloff
Yes, the Government Really Does Stash Billions of Pounds of Cheese in...Emily Baron Cadloff
What to Do With an Abundance of PeppersShelby Vittek
6 Differences Between Llamas and AlpacasAndrew Amelinckx
Explore Modern Farmer
Related
Food & Drink
‘Tis the Season For GleaningCrystal Sands
Food & Drink
Food Inflation Is Eating Up Grocery BudgetsShea Swenson
Plants
This Seed Detective Travels the World Tracking Down Lost CropsEmily Baron Cadloff
Books, Cookbooks
In Her New Book, Molly Yeh Goes Back to BasicsEmily Baron Cadloff
wpDiscuz
We use cookies on our website to give you the most relevant experience by remembering your preferences and repeat visits. By clicking “Accept”, you consent to the use of ALL the cookies.
Cookie settings ACCEPT
Privacy & Cookies Policy