Can Anyone Stomach This Orange-Toothed Giant Rodent?

Too many nutrias in Louisiana, why not eating? 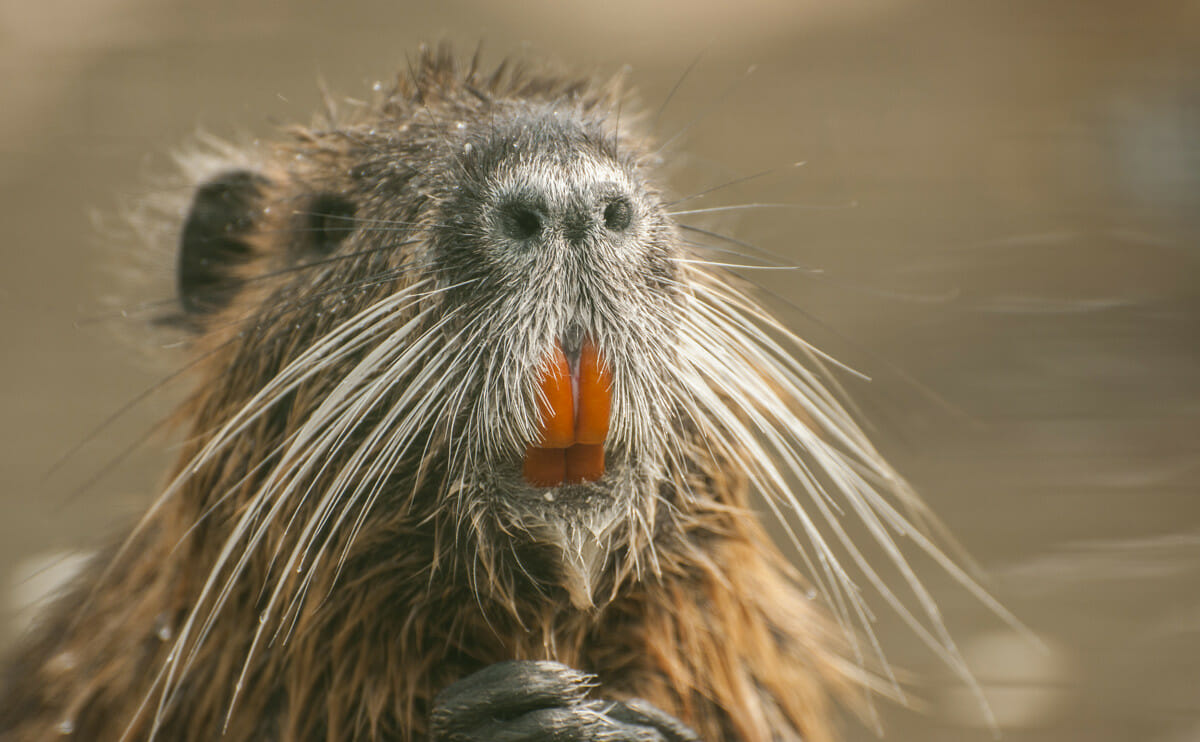 A semi-aquatic animal native to South America, nutria (also known as the “coypu” or “river rat”) found their way into Louisiana marshes beginning in the 1930s after escaping from fur farms set up to turn their glossy brown pelts into hats and muffs. By the late 1970s, the fur farms were all but shuttered, but nutria remained in the wild.

While some people are turned off by the critter’s hairless tail, it’s the teeth that get me. Nutria teeth – hooked, stubby Tang-colored fangs – are a shade of orange that is unnaturally bright for tooth enamel. Nutria’s gnarly teeth function as habitat-destroying machines, eating the majority of marsh plants (they don’t discriminate) at both root and stem. When nutria gnaw through the wetland’s vegetative root system (or “mat”) that holds the delicate ecosystem in place, they create permanent flooded ponds known as “eat outs” and wreck the habitat for any additional wildlife-in-residence.

Nutria’s reproduction rate — one nutria can birth three liters a year with up to 13 pups per litter — is downright unnerving, and has proven to be a case study of how quickly and devastatingly an invasive species can develop. Twenty nutria were introduced to Louisiana in 1938. Two decades later, the number exceeded 20 million, with the species settling into its new role as a “most wanted” invasive marshland species.

One nutria can birth three liters a year with up to 13 pups per liters.

In an effort to control the population, the first bounty on nutria was introduced (sans funding) in 1958, making a minor dent in the always-hungry rodent’s ranks. Almost 50 years – and tens of thousands of damaged bayou acres – later, a more comprehensive approach developed. The Louisiana Coastwide Nutria Control Program was announced in 2002, offering a $5-per-tail bounty on nutria for hunters and trappers along the Louisiana shoreline with the goal of harvesting 400,000 nutria annually.

The program has proven to be a success. Roughly 304,000 tails are collected on average each season, and a wide variety of events – from nutria rodeos to sheriff-directed nutria sewer-hunting – have lessened the rodent’s damage to Louisiana’s delicate coastline.

The tail-based hunting system has also created a new market for what to do with the remaining nutria carcasses, which are all-too-often simply chucked back into the bayou. The most obvious answer for many? Eat it.

Chef Phillippe Parola has made a career out of encouraging the consumption of invasive species, including nutria, which is low in cholesterol and can be prepared in a similar manner to turkey.

“The best and quickest way is to take the hind saddle, bone-in, and put a honey mustard dressing on it with brown sugar, then put it on a barbecue pit,” says Parola. “Anyone who knows how to barbecue will know how to cook it, just like pork. I guarantee you that everyone will love to eat it.”

The tail-based hunting system has also created a new market for what to do with the remaining nutria carcasses. The most obvious answer for many? Eat it.

The chef is supportive of efforts to cook and serve nutria’s lean, protein-packed meat, but has firmly positioned it on his personal backburner. The latest invasive species du jour for Parola? The omnipresent (perhaps more palatable) Asian Carp.

While convincing diners to sop up nutria gravy with their cornbread will probably always present some hurdles, less gourmand uses for these bucktoothed rodents are popping up across the swamps. Located on the edges of the bayou in Thibodaux, the Barataria-Terrebonne National Estuary Program (BTNEP) has committed itself to nurturing small businesses that are finding ways to finagle the destructive rodent – both meat and fur – into functional, everyday products.

The most celebrated and successful of these is Marshdog, a line of dog treats crafted with Louisiana nutria meat (sourced from the rapidly disappearing estuary) by a brother-sister team out of Baton Rouge.

“We didn’t set out to get in the dog food business,” says Veni Harlan of Marshdog, who personally prefers to eat her nutria in sausage with pork. “We came at it by saying, ‘This is something that everyone can do to help save the wetlands by using an eco-sustainable protein source.’”

The ingredients in the company’s (gluten-free) Barataria Bites reads like a “what’s what” of pup-friendly, locally sourced Louisiana fixings: cane syrup, sweet potato, pepper and – of course – nutria.

Nutria has even gained fashionable notoriety at the hands of artist Cree McCree and her nutria-based clothing line Righteous Fur, another BTNEP grantee. “I came up with a whole jewelry line out of the nutria teeth, and outfits out of the nutria fur,” said McCree. “People were just throwing these nutria back in the swamps after they cut off the tails, depleting the oxygen in the water.”

McCree is optimistic about nutria fur becoming a sweet spot for helping to save the coast in a stylish manner: “We like to say, ‘Save our wetlands, wear more nutria.’”

I tried nutria at a family reunion barbecue in CA and thought it was tender and delicious! I’ll do it again if it helps save our wetlands?.

Ate it in Belize. They call it “gibnut” there. Same place Queen Elizabeth ate one. Petty good. Better tasting than chicken, but I like rabbit and gibnut tastes like rabbit. I’d like to try something like chicken-fried gibnut or gibnut nuggets.