The World According to Carp - Modern Farmer
Animals, Plants

The World According to Carp

Forget "Jaws,” these fish are our new worst nightmare. 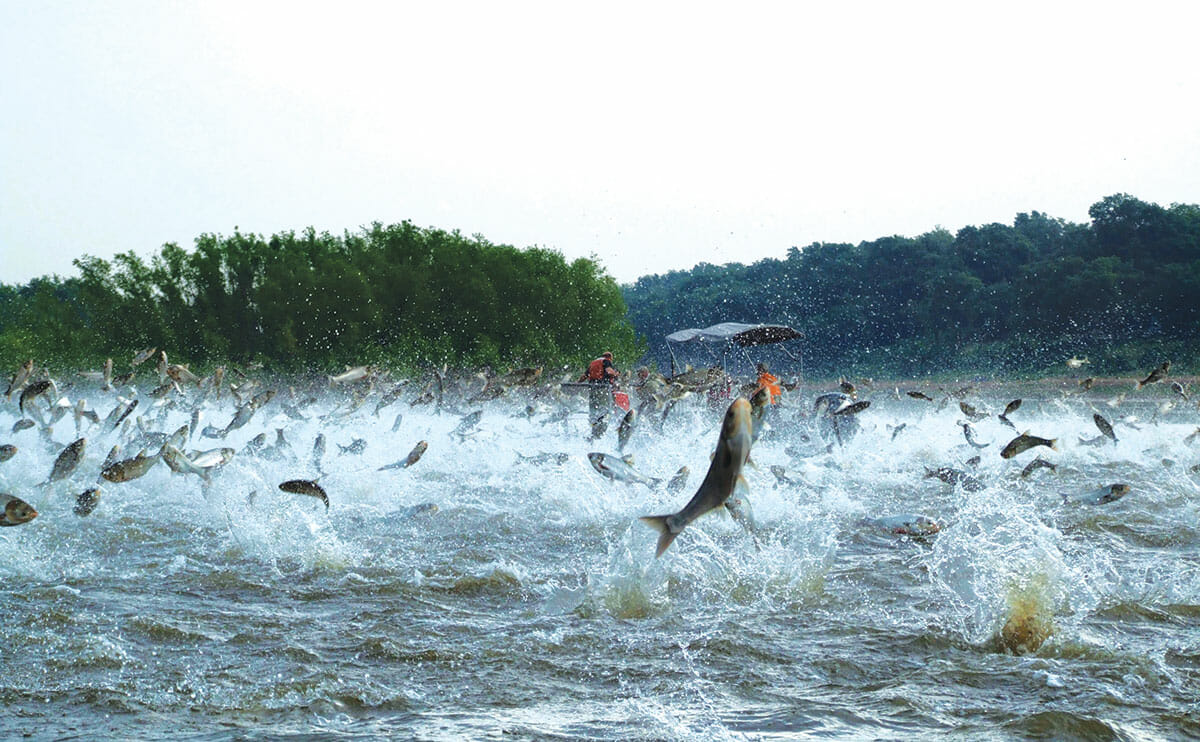 What can grow to 150 pounds, hurl its massive body 10 feet into the air and come crashing down on unsuspecting ship decks, kayaks and recreational boaters, causing property damage and even injuries? The Asian carp.

However, impressive acrobatics aren’t what make this invasive fish such a threat. As the Asian carp chomps its way through U.S. waterways, the danger is its appetite.

Originally imported in the early 1970s to clean up algae on catfish farms and sewage lagoons, Asian carp soon escaped – likely during flooding. They have spent the last 40 years infiltrating Midwest rivers right up to the edge of the Great Lakes, wreaking havoc on native fish populations and ecosystems along the way.

Of the seven Asian carp species that have been introduced to the U.S., two cause the most chaos: the bighead carp and the silver carp. These destructive algae gorgers graze constantly, scooping up plankton that support fish that people actually want to eat. “It’s cutting out the lowest level in the food chain,” says Edward Little, a biologist with the U.S. Geological Survey.

But plankton aren’t the only green stuff these fish are devouring: They’re also slurping up money.

Sport and commercial fishing in the Great Lakes is a $7-billion-a-year industry; carp are a looming threat to the economic security of the entire region. They’re yet another drain on the Great Lakes, which already struggle with 180 invasive species.

And it’s not just the U.S. that’s under siege. Australian waters are overrun with common carp, which wreak their own environmental havoc. In Asia, where carp are a natural part of the ecosystem, the fish has long been a popular dish and the Chinese have been aquafarming them since 3500 B.C. But, plunked in unfamiliar settings, the massive creatures adapt easily, quickly outbreeding and out-eating the competition.

They have thoroughly invaded the Mississippi, Missouri and Illinois river systems. In areas with a heavy load, Asian carp have wiped out a large portion of the native fish species, and now make up as much as 80 percent of the total biomass. “It’s not uncommon to have [carp] fishermen collecting a thousand pounds of fish a day,” says Little.

Soldiers in the fight against carp agree that keeping them out of the Great Lakes is the main goal. Many believe this will be accomplished largely with electric barriers and other scientific methods combined with heavy fishing downstream.

“Keeping them out of areas that they’re not already in – that’s one of the first priorities. An ounce of prevention is worth a pound of cure, no situation fits that cliché better,” says Sam Finney, a biologist working on electric barriers with the U.S. Fish and Wildlife Service.

The battle has aligned dozens of state and federal agencies, citizens from all walks of life and made unlikely partners of scientists and commercial fishermen.

Beyond building massive electrified barriers – one stretches across an entire river – scientists are deploying an arsenal of weapons against the fish.

The most sensitive tool to detect Asian carp is environmental DNA, or eDNA. Testers scoop up water, pour it through a filter paper and send it off to a lab where researchers look for the presence of carp.

“It’s kind of like a crime scene. We’re looking in areas where we don’t want Asian carp or where they are in very small numbers – places where you could fish all day and miss one or two swimming under the radar,” says Kelly Baerwaldt, who coordinates the Asian carp eDNA sampling program for the U.S. Fish and Wildlife Service. Quick-growing and with few natural predators, it only takes a few fish to procreate into a thriving population – which is why the carp are so invasive.

The eDNA test is not a perfect tool. Birds who eat carp and boats that traverse infested waters can cross-contaminate the samples.

“We encourage people to rely on it like a smoke alarm,” says Baerwaldt. “You’ve got DNA there, you might want to go see if it’s a real fish.” 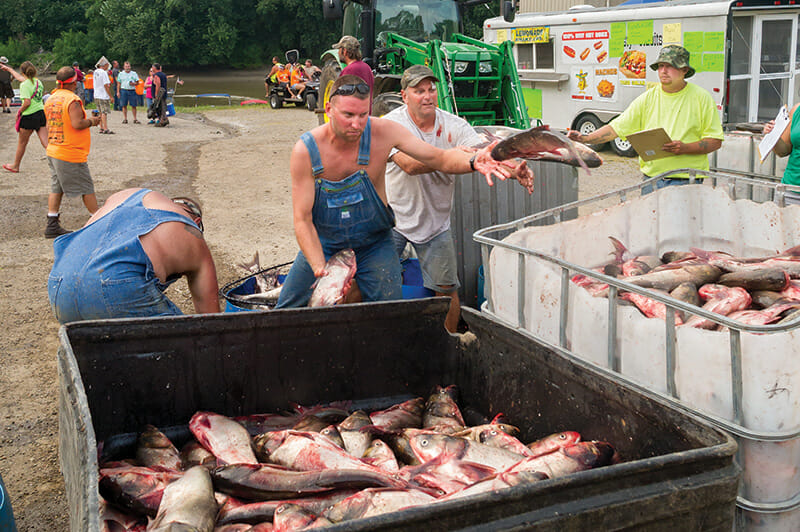 Contestants at the Redneck Fishing Derby in Bath, Illinois, throw Asian carp into containers. The winner is the team with the most fish caught. / Courtesy Michael Weaver.

Other biologists have found ways to trick the fish into gathering in large groups so fishermen can nab them more easily. At first, scientists tried to woo the fish with sex pheromones, but then they stumbled upon a cheap and easy solution: the same kind of algae you can buy at your local health food store.

“We had an opportunity to look at this extensively in the Missouri River. After about five days, the fish would come to the surface of the water when they heard the boat – basically begging for food. It’s a really Pavlovian response,” says Little.

The method, which keeps fish hanging out for about an hour, shows promise, and Little recently began field-testing it in the Illinois River.

Fishermen, meanwhile, are scaling up their efforts to defeat the formidable foe.

Because carp eat plankton, they won’t chomp on a baited hook. They’re extremely sensitive to nets, which make them tough to scoop up. But that hasn’t stopped fishermen from trying to fish them out of existence.

In the Great Lakes, where fishing is a $7-billion-a-year industry, carp are a looming threat to the region’s economic security.

Sport fishermen hold rallies like the Redneck Fishing Tournament in Bath, Illinois, with the express purpose of catching and killing as many carp as they can. And woe unto the carp they do catch: “Fishing poles not allowed – bats and nets OK,” states the competition’s website.

Some researchers use a technique called electro-fishing, stunning the fish with a carefully calibrated voltage before gathering them in a net. One such vessel is the “Magna Carpa,” a custom-outfitted boat owned by the U.S. Fish and Wildlife Service. The boat has several nets on the front and back to catch all sizes of fish, from the biggest to the smallest, and some nets are electrified to stun larger fish.

But once you’ve harvested thousands of pounds of carp, what do you do with them? Well, you can order them with mustard, for starters.

A number of marketing efforts are underway to scare up an appetite for the bony fish. At least one company processes them into kosher hot dogs; they have also been turned into fish jerky and Omega-3 oils. In 2012, the Illinois Department of Natural Resources launched a major publicity campaign encouraging sport fishermen to catch Asian carp and donate them to “Target Hunger Now!” for processing into ready-to-eat meals for Illinois’s food banks.

And it’s not just humans who can enjoy a carp dinner: When ground up and dehydrated, carp make a nutritious alternative to ocean fishmeal as a food for farmed fish. They can also be turned into organic plant food.

“If you use a fertilizer with fish oil in it, it helps the fertilizer adhere to plants and soil, so the plants have time to uptake it and the microbes have time to break it down. You’re not flushing everything into the river,” says Thomas Lansing, owner of Carpe Carpum Organic Fish Fertilizer in Boise, Idaho (puns abound in the Asian carp world).

The quest to defeat the carp is a swim upstream. No one tactic is going to quell the fish, something recognized at the highest levels of government. The Obama administration has poured over $260 million into efforts to de-carp waterways and defend local economies and environments. An army of scientists, entrepreneurs and fishermen are fighting to put a dent in populations, but insiders see it as just the beginning.

“People in [fishing] derbies will go and drag thousands of pounds out, but in one little lake where I get my fish there’s an estimated 4.1 million pounds – 450 pounds per acre,” Lansing says.

And then he paraphrased “Jaws,” a movie about a much more terrifying enemy than a plankton-swilling fish. “We’re hoping we can take enough out of the water to make an impact, but we’re definitely gonna need a bigger boat.

Top: Illinois River silver carp jump out of the water after being disturbed by watercraft. Courtesy AP Photo / Nerissa Michaels.

I have been pricing fishmeal for fertilizer and it just doesn’t pencil out. I can get pork meat scrap and bone meal for nearly a quarter what I can get fishmeal and that doesn’t include shipping. Not to mention when you ask for Asian Carp meal they look at you like you grew ears. Had a conversation yesterday with a huge international company and they don’t appear to even have it.