Successful Game Developer: 'I Owe it All to My Goats' - Modern Farmer
Animals, Lifestyle

Successful Game Developer: ‘I Owe it All to My Goats’

Indie game developer Phil Hassey has enjoyed a steady stream of successes, an uncommon feat. The secret to his success? Goats. 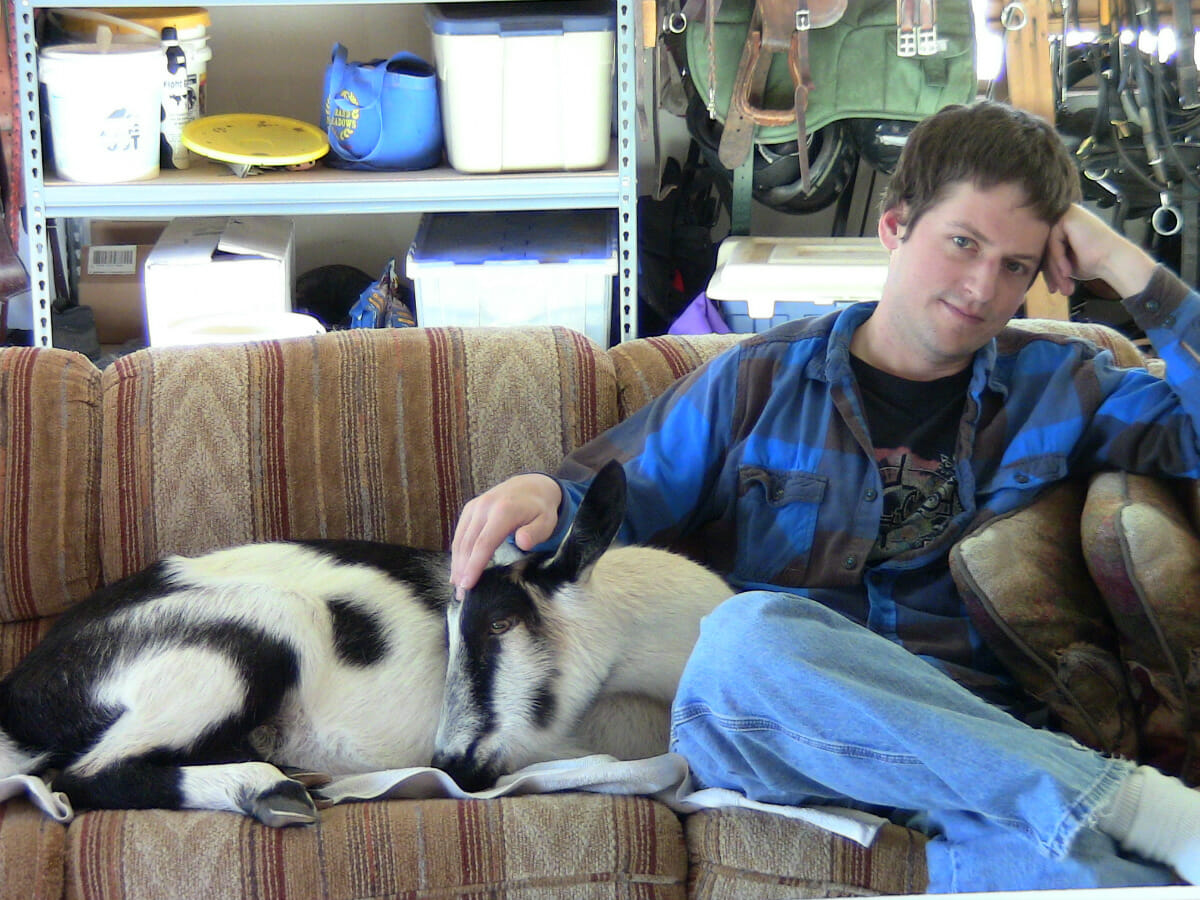 Modern Farmer first learned of Hassey’s side passion when he gave a lecture at this year’s Lost Levels Unconference (an offshoot of the Game Developers Conference) titled “Goat-o-Rama: How Raising Goats Has Radically Changed How I Develop Games.” Naturally, we were intrigued.

We managed to rope Hassey into a delightful Skype chat, guest starring his brand-new baby goat Huckleberry Finn. Huck snoozed through the whole interview on Hassey’s lap (guess the little buddy was all tuckered out).

Modern Farmer: So this is Huckleberry Finn?

Phil Hassey: It is! This is our goat Lilly’s first baby. We were expecting twins based on how big she got but he’s just huge — an 11-pound baby goat.

MF: You aren’t a farmer. Why did you get your first goat?

PH: Fourteen years ago, my wife Nan and I went to the Allegheny County Fair in western New York. We had a look at the goat that took first prize. She was standing on her hind legs eating his first-place ribbon. We were like: “Goats are funny. We should get one.” Simple as that.

MF: Where did you find one?

PH: On an anniversary trip we drove by a farm with a sign that said “Goats: $25.” We bought a baby Nubian/Alpine cross and named him Cuzco.

PH: Have you seen “The Emperor’s New Groove“? No? It’s a kid’s movie where an emperor gets turned into a llama with a ton of attitude. The llama was named Kuzco.

MF: What was Cuzco’s mischief level as a kid?

PH: Pretty high. We were still in college, living in an apartment above a dentist’s office. One of Nan’s college professors let us keep Cuzco on his property; he was always getting free and causing trouble. Goats are curious critters — they like to get into everything. At one point we tried tying Cuzco to a big tire to slow him down. It worked, but it was just so pitiful to watch him hobbling around the yard. I didn’t know anything about raising goats!

Goats balance out my life, give me something to focus on outside that glowing rectangle.

MF: Tell us a little about your professional career.

PH: Sure. I’ve always made video games, since I was a kid. But it was mostly a hobby; I didn’t go to school for computer science or anything like that. Then in 2006 I made this PC game called “Galcon” that didn’t really take off. It wasn’t until 2008, when it was chosen as one of the first couple hundred games for the iPhone, that things really took off.

MF: You’re an independent developer, without the backing of a software company. Excuse us for asking, but does that pay the bills?

PH: It does! I have to say, I’ve been very lucky. I remember an experienced game developer told me back in 2004 to never quit my day job. He said, unless you’re one of the few people who make a breakout hit, it’s just too hard to make it. For me that game was “Galcon,” which kind of put my name out there. I’ve had other successes since then, but plenty of failures too. I made a game called “Chickon,” which was like “Galcon” except with chickens instead of spaceships. It totally bombed.

MF: So how have goats helped your career?

PH: I’ll give you the gist of my workshop at GDC [Game Developers Conference]. A lot of developers deal with issues like loneliness and depression. The common wisdom is that they should talk to friends or peers, and if it’s really serious they may need professional help. But for me, goats are the answer.

PH: I hear stories from developers, they haven’t seen their families for three months, they’ve basically been camped out in their office for as long as they can remember. When you’re struggling to create a game, your whole life starts to revolve around this one thing. All your emotional suffering comes from working on games; it’s important to have a healthy mind.

That’s what goats give me. They balance out my life, give me something to focus on outside that glowing rectangle. It’s about taking care of myself, making a conscious effort not to fall apart. Developing games can be a long and difficult slog at times. Without goats I would definitely burn out.

MF: With that little guy in your lap, how could anyone burn out?

PH: Exactly. Just helping deliver this goat was an amazing experience. It was a tough delivery, with a huge baby, and I was totally caught up in it. It’s just really important to have other things in my life.

MF: Have you ever made a goat game?

PH: More than one. There was a multiplayer game called “Capricornus” where goats are moving around on beach balls, trying to bounce each other off. I also made “Cuzco’s Goat Bloat” in one weekend. Bloat is a medical condition goats get; in the game some goats have it and you’re trying to herd them to the medical area and keep them from infecting others. None of the goat games have really clicked.

MF: That’s hard to believe. You know about the crazy success of “Goat Simulator“?

PH: I do! Looks really great. There’s no formula for success in this business. I made a game earlier this year called “Breakfinity,” just a simple little Pong-like game. It’s had more downloads than anything else I’ve made. I could never have predicted that.

MF: Last question — do the goats always hang out while you work or is this a special occasion?

PH: This guy’s only two days old so we let him hang out inside. Last night he watched “The Princess Bride” in our laps. But we don’t really allow them in the house when they’re older. Unless it’s really really cold; sometimes we’ll let them in the basement while we watch movies.