Farmer Mistakes: Goats in the House

Bryce Oates moved his family back to the farm he grew up on, in Adrian, Missouri. He told us a story, about goats: My family had owned sheep and cattle, but never goats. Through a random series of events, we ended up with 14 of them. Some friends of ours run a sustainable goat dairy […] 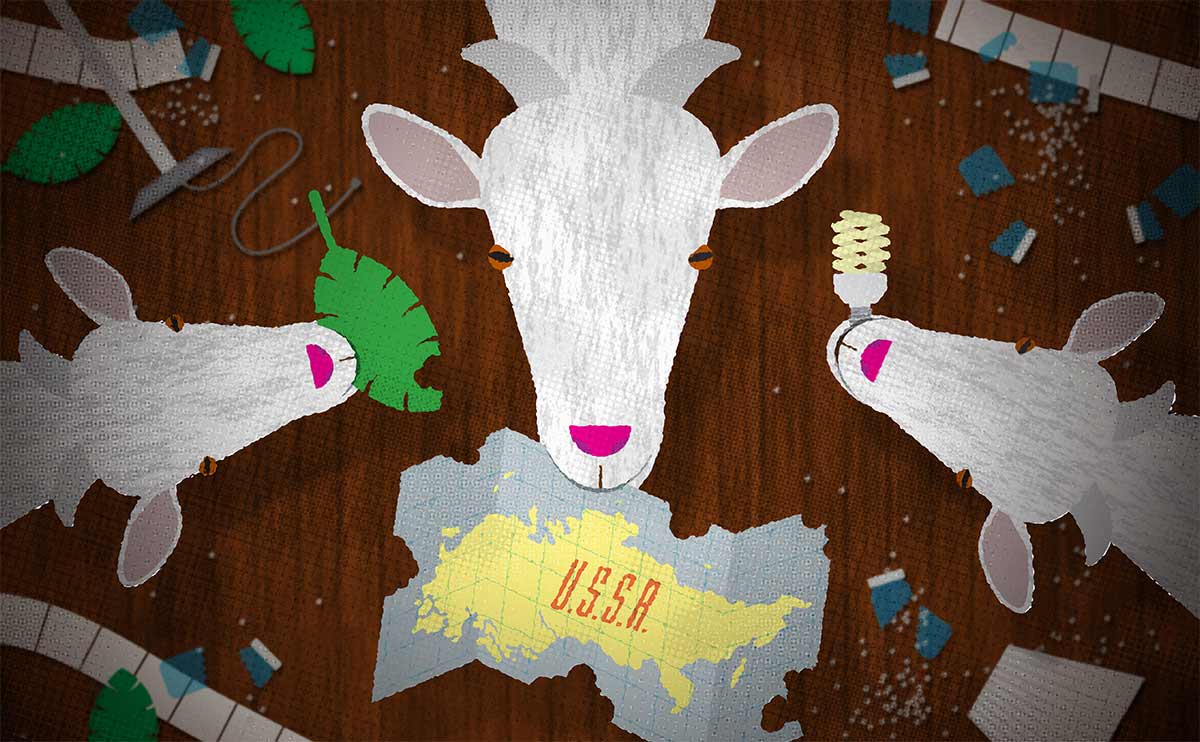 Bryce Oates moved his family back to the farm he grew up on, in Adrian, Missouri. He told us a story, about goats:

My family had owned sheep and cattle, but never goats. Through a random series of events, we ended up with 14 of them.

Some friends of ours run a sustainable goat dairy outside Columbia. Last spring they were selling baby goats for $10 each, a mix of Boers, Saanens, and Alpines. They all looked pretty different from each other. Some had long floppy ears, some had no ears. We figured they were cute and cheap, and we’ve got a lot of brushy farmland they could clean up. My boys were 5 and 7 at the time; they loved the babies.

My wife and I are college-educated, foodie, sustainable farming types. But my dad’s an old-school, West Missour-ah cattleman, and he thought we were just ridiculous — letting the goats trample all over our property, bottle-feeding them, whatever. Actually most people thought we were crazy. Our friends kept telling us, “Goats are trouble. Goats are trouble…”

If you’ve ever seen goat poop, it’s like little marbles, not that hard to deal with.

Right now we’re in the middle of building our own house, a post-and-beam, barn-like type of place. We used a lot of recycled materials, built our own doors. We were real proud of the French doors we put in.

A few weeks ago, we spent our Saturday watching my son play soccer. While we were away, guess who opened the French doors?

We had an old Soviet Union poster from the ’70s; the goats had pulled it down and eaten it. They ate my son’s Greek gods and goddesses poster; he was real upset about that. They knocked my wife’s hand-thrown coffee mug off the table. They smashed our jars of homemade pickles and hot sauce. They broke a bunch of light bulbs we use for our starter plants.

They also pooped everywhere. That’s not such a big deal by itself. If you’ve ever seen goat poop, it’s like little marbles, not that hard to deal with. But they’d gotten in my sons’ beds, wrapped themselves up in the bedclothes, just pooping and peeing for hours. It was bad.

With goats you really learn about your flaws in management. The fact they can open a door says a lot about their intelligence, but it also says we needed to install an extra latch.

Side note: Turns out I really like the taste of goat meat. We have seven goats now.