The Sting: In Bee Thefts, Keepers Suspect Their Own - Modern Farmer
Animals, Lifestyle

The Sting: In Bee Thefts, Keepers Suspect Their Own

Stealing bee hives. It's a thing. 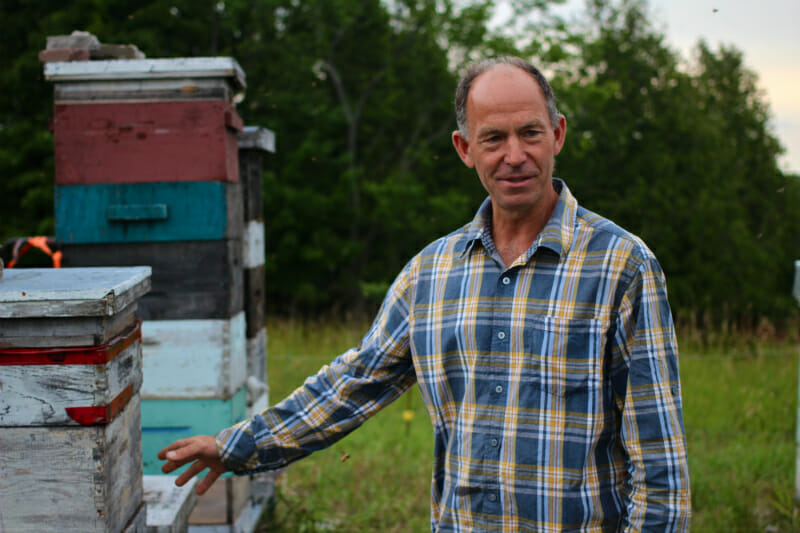 (Above: Beekeeper Ian Crtichell shows off hives on his farm, where a thief made off with beekeeping equipment and queen bees.)

To get to beekeeper Ian Critchell’s farm, you drive down the only main street in Havelock, Ontario. You keep heading north, past the farmhouses and rusted out trucks, over the old Kawartha Lakes Railway, where foot-high weeds rise in patches between the beams, and follow a winding and gutted gravel driveway. On this overcast day Critchell is sitting on his front porch with a cup of tea. He’s joined by Heather Halliday, a volunteer farm worker from England, and an orange tabby named Luna but that Critchell just calls “cat.” It’s late afternoon and Critchell and Halliday have just returned from the Port Perry Farmers Market, where they spent the morning selling honey and fresh pollen.

In early June, on this same porch, Critchell was robbed, likely under cover of night. The thief took six mating boxes from the porch, and then continued on to his property and stole two queen bees from a trailer. Luckily, the mating boxes were empty of bees, although they still cost him about $100 a piece. Not enough to put a serious dent in his operation, but enough to cause some concern. More than anything else, though, the theft of bees and equipment is another disturbing development in an industry that’s already in trouble.

Winter, historically, is always a tough time for beekeepers. There’s an expectation that a small percentage of their colonies will be lost in the cold. In the last few years, however, that percentage has grown tremendously. It’s not unheard of for a beekeeper to lose 90 percent of their colony in a given winter. It’s become so common a term has emerged for it: Colony Collapse Disorder. Beekeepers will open their hives in the spring to find the colony has vanished, save for a queen and a few lingering bees. The list of suspected culprits is long and varied: pesticides, mites, pollution or some combination of them all are often blamed, but the widespread use of insecticides called neonicotinoids is largely considered to be at the root of the problem. (This past April, the European Union agreed on a two-year ban for neonicotinoids, citing the risk they pose to bees.)

And now beekeepers have to worry about bees and equipment being stolen.

Bee rustling, thieving, stealing, however you choose to define it — it’s on the rise. Last summer, in Abbotsford, BC, a single overnight heist netted 500,000 bees and 3,600 kilograms of honey, with an estimated value of $100,000. There have been two other thefts reported in Ontario this summer, with losses totaling $3,000. In Wales, where a hive can bring in more than $300, there have been more than a dozen reported thefts. In California, a commercial beekeeper is currently offering a $10,000 reward for the return of 80 of his hives, stolen from an almond orchard with a flatbed truck.

The cases above remain unsolved, as do the thefts that have hit Ontario this summer. The popular theory among beekeepers? One of their own is to blame.

Officials and beekeepers suspect that bees are usually stolen either by apiarists with a suffering business or someone with passing knowledge of the industry looking for a quick start.

In most cases, there is little that can be done. While custom-made mating and hive boxes can be identified and recovered, the bees themselves are impossible to track. A typical hive contains between 30,000 and 80,000 bees.

“How do you even know what to look for?” says Constable Hannah of the Ontario Provincial Police. “I don’t think you can identify the bees once they’ve been stolen. They aren’t an animal that would have a tracking device and I don’t think we have DNA on file anywhere. Once they’re gone, they’re gone. Catching someone doing it is the only option.”

The thought of boosting a hive may seem farfetched (and potentially painful), but it’s easier than you might imagine. Tom Congdon has been keeping bees for more than thirty years, and has 1,600 hives at his family run operation Sun Parlor Honey, in Cottam, Ontario. They hoped that this year their 1,600 hives and 90 million bees would produce more than 300,000 pounds of award winning Ontario honey, but instead, Congdon says they are on the way to having their worst production year ever (he blames neonics).

He’s been a victim of theft in the past and says the best thing a beekeeper can do is keep operations out of sight. “We find if you keep them out of sight from the roads, there’s a lot less trouble,” he says, while adding that the use of hunting cameras can also be successful in snapping a photo of would-be perpetrators.

When it comes to the thefts, it’s as simple as loading the hives — still in their enclosed boxes — onto the back of a truck and driving off.

“You’d have to have some knowledge of bees to try and steal a colony,” says Congdon. “If you didn’t know what you’re doing, I don’t know if you’d be able to get it loaded onto a truck without getting stung. You would pick up the whole colony and take it, box and all. I would think that most of these thefts are other beekeepers.”

As a protective measure, many apiarists, Congdon included, move their hives to rural areas, and across several different properties. In most cases, you have to drive by the landowner’s home to access the hives.

In Critchell’s case, however, that risk wasn’t enough to stop the rustlers from invading his property.

Critchell’s driveway leads to a heavy steel gate that creaks as it drags open and pushes up plumes of gravel dust. There’s a barn near the gate that dates back to the first settlers and is home to a fleet of rare chickens — Silkies, Chanteclers, Jersey Giants, and White-faced Black Spanish ”“ a dozen goats, and a pony named Beauty.

“A lot of people are worried about the future of this industry,” he says, walking past a cage filled with a dozen New Zealand rabbits. “It’s definitely deteriorated and some areas are worse than others. But part of the reason I’m out here now is because I believe if you’ve got bees — if it’s what your passion is — if you start them off with clean water and clean food, they got a good start in life.”

‘If you didn’t know what you’re doing, I don’t know if you’d be able to get it loaded onto a truck without getting stung. I would think that most of these thefts are other beekeepers.’

Past the old barn is a trailer, a Prowler from the ’80s, with a rusted front step and sun-faded yellow vinyl siding. Critchell thumbs through a set of keys. The robbery has caused him adopt a few new practices around the 77-acre property. Using locks may seem like a basic theft deterrent, but before the rash of heists, Critchell never had any reason too. Once inside the trailer, with its faux wood finish, he prepares his queen bee cells. He’s proud of his queens: they’re hygienic, lay good eggs and are easy to work with. He moves through the trailer in quick steps, pulling up different cells and frames and containers. It was inside this trailer where the rustler stole two queens. They were contained individual hatching cells, ready for transition into the hive. Critchell said the thief would simply have to pop open the cells and transport them in any enclosed case. Even an empty matchbox would suffice.

Outside the trailer is a section of about 40 hives, one of three such sections on the property. Each hive contains 30 to 70 pounds of honey. An electric fence surrounds the area, with 11,500 volts pumping through it, enough to shock a bear. Critchell steps over the fence and pulls out a honey comb, swarms of bees drift around him in dark clouds. “This is one of the joys of the job,” he says, digging a finger into the bee-soaked cell. “Fresh honey.”

Honey and hive products sold in Ontario bring in around $25 million dollars a year. There are about 3,000 beekeepers in the province, but most are hobbyists with only a couple of hives. Dan Davidson, the president of the Ontario Beekeepers Association, has been working in the industry since 1996 and says it’s currently at one of the lowest points he’s ever seen, which could be motivating the thefts.

“It’s different in every area, but the industry in Ontario is definitely suffering,” he says. He, too, puts much of the blame on neonics, as well as Varroa mites that feast on the bees each winter.

Davidson says the yearly yields haven’t changed much, but the amount of work it takes to keep an operation running has increased exponentially. He’s frustrated by the rash of thefts but he can empathize with it. “I don’t think there’s anyone that wants to steal anything,” he says. “They are just getting desperate. If they could keep their own hives alive, they wouldn’t need to steal.”

Davidson says the best, and perhaps only, measure to take to secure a hive is to place it where it can’t be found.

Critchell is puzzled and disappointed by the thefts, but he’s not angry. He understands the frustration that other beekeepers are feeling, because he feels it himself. They are all trying to make a livelihood the same way, in an act of animal husbandry that’s become increasingly difficult. He’s not the only beekeeper in Havelock, there’s about a half dozen in the town of 1,200 people, and they’ve all grown wary, suspicious that someone among their ranks is stealing bees.

“The other beekeepers are concerned,” Critchell says. “They are wondering who would do such a thing. It’s out of character for the industry, but I guess every industry has its bad apple.”

Critchell has since installed several video cameras on the property, a cost that comes out of his pocket, but could prove its worth if the rustlers return.

He hopes, as anyone would, that they don’t. For now, his operation is surviving, and so are his bees. The future, in both cases, isn’t as certain.