The State of the CSA

CSAs, or "Community Supported Agriculture," used to mean that you'd get a box of food from a farmer whom you knew. Not so much anymore.

Ask a locavore what’s the best way to get their food direct from a farmer, and chances are they’ll offer up the idea of “Community Supported Agriculture,” or CSAs. The boxes filled with farm-fresh food, either picked up or delivered straight to your door, have become increasingly popular across the US in the past ten years, but the model itself is decades old.

The earliest iterations emerged in Japan in the 1960s and ’70s. Concerned with where their food was coming from and how it was being grown, Japanese families started funneling funds to local farmers in exchange for goods from the farm throughout the season. These models were called “teikei.” The word literally means “relationship” or “partnership,” but philosophically it signified “food with the farmer’s face on it.”

CSA-like models started developing in Europe during the same time period, and by the mid-1980s, CSAs arrived in the United States.

Since then, CSA has become a widely used term in both marketing and media. It’s not uncommon to see a buying club described as “CSA-like” – for example there’s a company that offers a six-month CSS (Community Supported Soap) subscription. CSA is also used as a catchall phrase for companies with relationships with small farmers, like a food truck that was described as “a CSA delivery vehicle.” Adding to the confusion is the diversification of small farmers’ revenue streams. Farmers who might have previously relied solely on a CSA are finding other ways to make money such as canning and freezing their goods and they’re partnering with other farmers, food artisans and tech companies to grow their business. It all raises the question: Would those Japanese families even recognize today’s CSA? What is gained and what is lost as the format shifts?

Stoneledge Farm in the foothills of the Catskills in New York was an early adopter of the CSA trend. Across New York City and Connecticut, for almost 18 years, the face that many families have associated with their food is Deb Kavakos, who runs the farm with her husband. 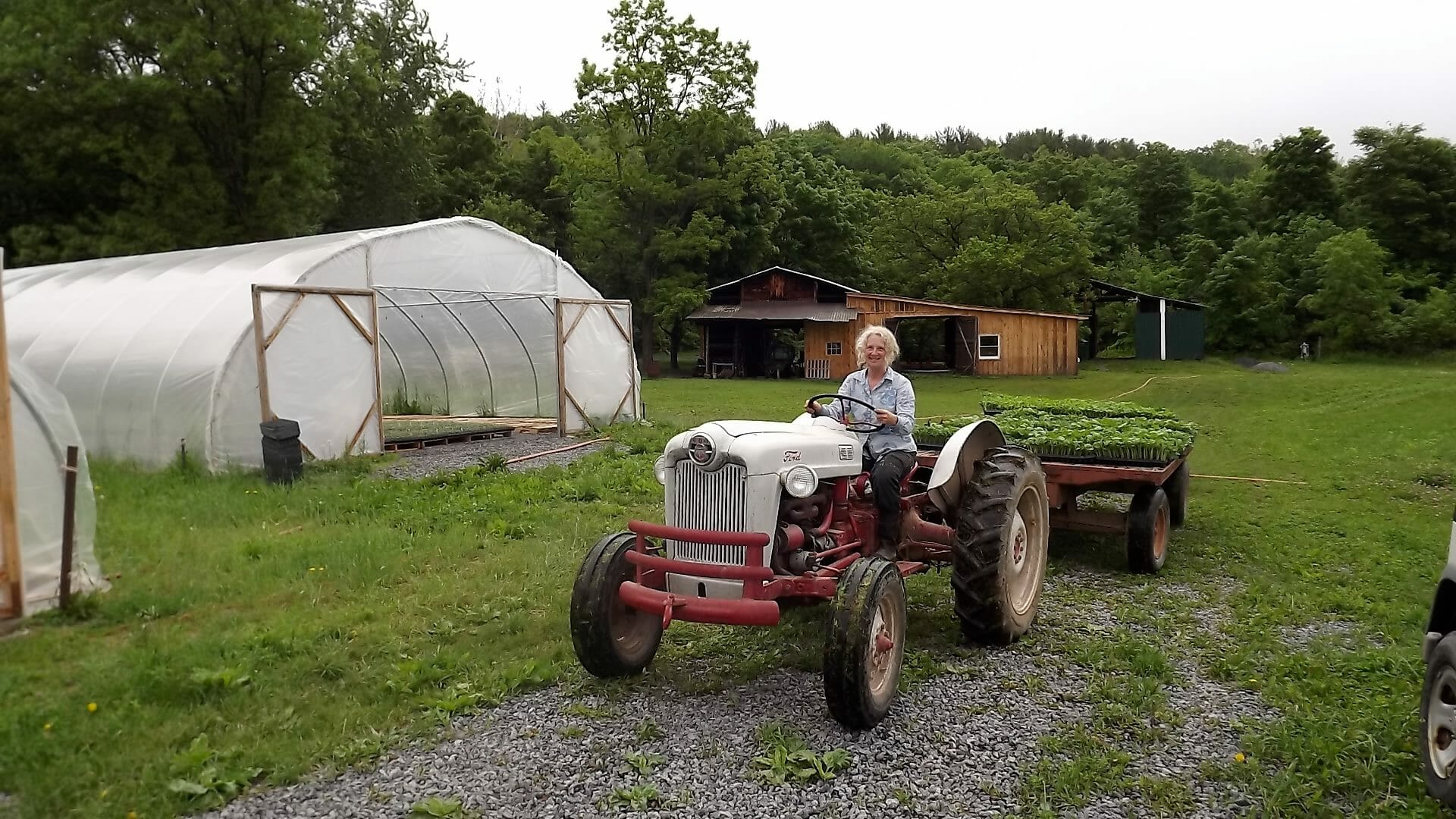 When Kavakos started farming she had four young children she needed to think about in addition to her vegetables. She knew she would have to go into New York City to sell enough produce to make a living, but she also wanted to be home with her family.

Farmers markets are great options for some, Kavakos said, but they didn’t offer her the stability that her new farm and family needed to grow. Then she read about a new concept called CSA. “And it just sounded perfect to me,” she said.

As a farmer the CSA model was something “you could count on it,” Kavakos said. It allowed her to budget and she “didn’t have to worry if it was a rainy day at the market.” She could sell her produce in the city, but didn’t have to travel there too often. Best of all it was a direct consumer-to-farm link: “You got to know your members even more” than she would at farmers market, she said.

Online companies can sever the consumer-to-farmer connection Kavakos so values. “They’ll have a picture of the farm or farmer, but that’s just a picture.”

In the mid-’90s, Kavakos and her shareholders had to constantly explain what a CSA was. Things have changed. She’s gone from a couple hundred shares to nearly 1,300 this year. The farm has a website now, and she’s moved the sign-up process online. She’s expanded her offerings, selling fruit and mushroom shares in addition to vegetables.

“There’s a whole flourishing of the model,” said Anna Lappé, an expert on food systems and a sustainable food advocate who’s authored three books on such topics. She’s excited to see honey CSAs and fish CSAs as they apply the model “to food that isn’t grown on the land,” said Lappé. “It’s a demonstration to how much hunger there is for that direct connection to where our food comes from.”

“I’ve spoken to a lot of congregations around the country, and there’s now what I would call a movement of congregation supported agriculture,” said Lappé. “Again a very similar model but instead of it being individual households that become a shareholder of a farm, for instance, it’s whole congregations as a community saying, ‘We want to support our local farms.’”

When communities and other organizations take the lead on CSAs, they often pay upfront for the members, who can reimburse them in installments or get discounted shares. This addresses a common complaint about CSAs: the upfront price excludes low-income eaters. In such models the farmers are still paid directly – an important ingredient in a CSA, according to Lappé. And this can get lost as the model expands. 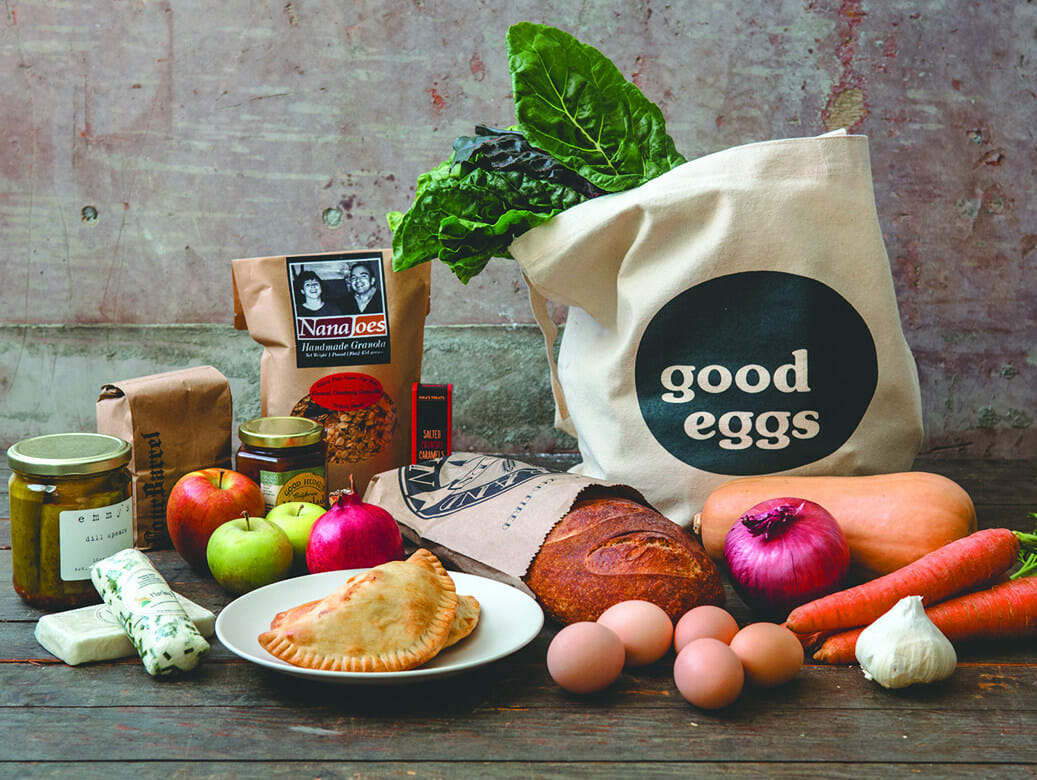 A company recently contacted Kavakos about buying her produce for a home delivery service. “What if you have all this lettuce that you have ready to be picked and people online don’t order your lettuce?” she asked. “For us when the lettuce is ready, we pick it and it goes to our members.”

Not to mention, such companies sever the consumer-to-farmer connection Kavakos so values. “They’ll have a picture of the farm or farmer, but that’s just a picture,” she said.

Lappé has been watching the rush to move CSA-type businesses online closely.

“It is interesting to see this huge interest in the tech community to develop the killer app around food that’s going to make an investor a lot of money, and in theory promote sustainable agriculture,” said Lappé. “I think that it is wise for all of us to look at those investments with some skepticism,” she said, adding, “when you’re investing and expecting double-digit returns I think it’s inherently counter to the philosophy of sustainability.”

And then there are the companies that don’t quite work like a CSA but employ the terminology.

“The fact that [CSA] is now being used as a marketing term is a little surprising to us,” said Jacquie Berger Executive Director of Just Food, a non-profit organization that promotes sustainable farming and eating in New York. “I think what they are capitalizing on is that feel-good notion behind the direct connection between the farmer and the community.”

Middlemen are not a new issue for producers. Lappé says that middlemen at farmers’ markets, such as wholesalers who buy from the farmer and sell at the market, ruffle some feathers. “There’s always been this long standing controversy in the farmers market community about whether you are a ‘grower-only’ market,” she said.

These days, you can get just about everything in a box.

Of course there is a reason that consumers want a middleman. “I know people are really pressed for time, and it’s going to be tempting, but I wonder if they’ll miss some of the other things that come with really belonging to a CSA group,” said Kavakos.

Diverse groceries from a selection of local farms delivered at a push of a button doesn’t sound like a bad thing to customers of new companies like Good Eggs and Farmigo, two new players in the online sustainable food space. Founders at both companies say that they are reaching a different demographic, one that perhaps can’t cook based solely on Kavakos’ harvest, but who still want to support local farmers.

Part of Farmigo’s business plan is CSA software that automates much of the management of a traditional CSA. “The reason you become a farmer is because you want to work in the fields,” said Farmigo CEO Benzi Ronen. “‘You’re not necessarily a great administrator.” Farmigo takes 2 percent of sales from farmers to help with website services, offering them the chance to spend more time with their crops.

Another side of Farmigo’s business is called “Farm Communities.” The company connects groups, such as coworkers or neighbors, to a network of farmers that offer the customer customizable food options. “The type of person who is willing to subscribe to a CSA is limited to about 1 percent,” said Ronen. “The CSA is optimized for a farm, and we wanted to create a model that was optimized for a consumer, but gave a lot of the same benefits” of a traditional CSA.

Anna Erickson runs Hands Full Farm in Valley Ford, California and works with Farmigo’s Farm Communities. For her the benefits greatly outweighed any downsides. “Working with Farmigo versus having my own CSA, I’ve never met the people who are getting my eggs.” she wrote in an email. Like Kavakos, Erickson acknowledged that the farm-to-consumer tie is snipped, but she “didn’t really mind because what I wanted was people, whoever, getting the best eggs they could, and if I could provide them, the more the better.”

Good Eggs’ CEO Rob Spiro does not call his company a CSA, but “an evolution in the CSA concept,” he said. At Good Eggs customers can browse online and find local farmers and food artisans and buy directly from them. Consumers can also “subscribe” to farmers and set up reoccurring purchases. The idea is for customers to replace an entire trip to the grocery with local foods. Good Egg only takes a cut from food producers after the purchases have been made. 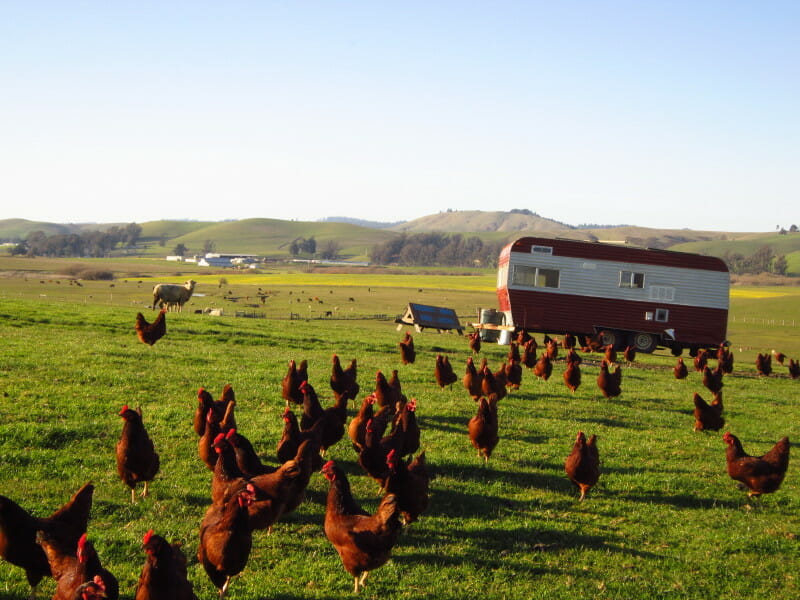 Fishkill Farm in New York’s Hudson Valley has a successful, traditional CSA, but also joined up with Good Eggs when they expanded in to the New York market in 2013. Mark Doyle, the farm’s business manager, said the website offered the farm “a different revenue stream.” As for the cut Good Eggs takes? The farm is paying for the convenience of having a new way to sell their goods and access new customers.

Those new buyers might be customers who’ve tried traditional CSAs and found they weren’t right for them. Both Spiro and Ronen said they have such customers. “Instead of sending them to the supermarket we want to meet them in-between,” said Ronen.

“Everyone who is helping develop marketing channels that keep local farms in business deserves a place at the table. It’s just important to recognize that these are businesses, not community-run projects or social ventures,” said Just Food’s Berger. “CSA provides a greater social benefit for the broader community.”

It’s unlikely, say, that customers of an online market would have the connection that Roxbury Farm, another upstate New York farm, has to its members. When the farm needed a new box truck, members bought shares years in advance to help pay for it.

Both Spiro and Ronen see a future that includes traditional CSAs as well as new technologies that help more people access sustainable food. The concern for some is that convenience will trump a face-to-face connection with a farmer.

As for Kavakos, she knows her members understand the value of her CSA. She rarely even has to tell people what it is anymore. But for a future that includes her style of farming, she may want to remind people of its older definition.

(Pictured at Top: The contents of a Stoneledge Farm CSA box. / Flickr: smith_c19)