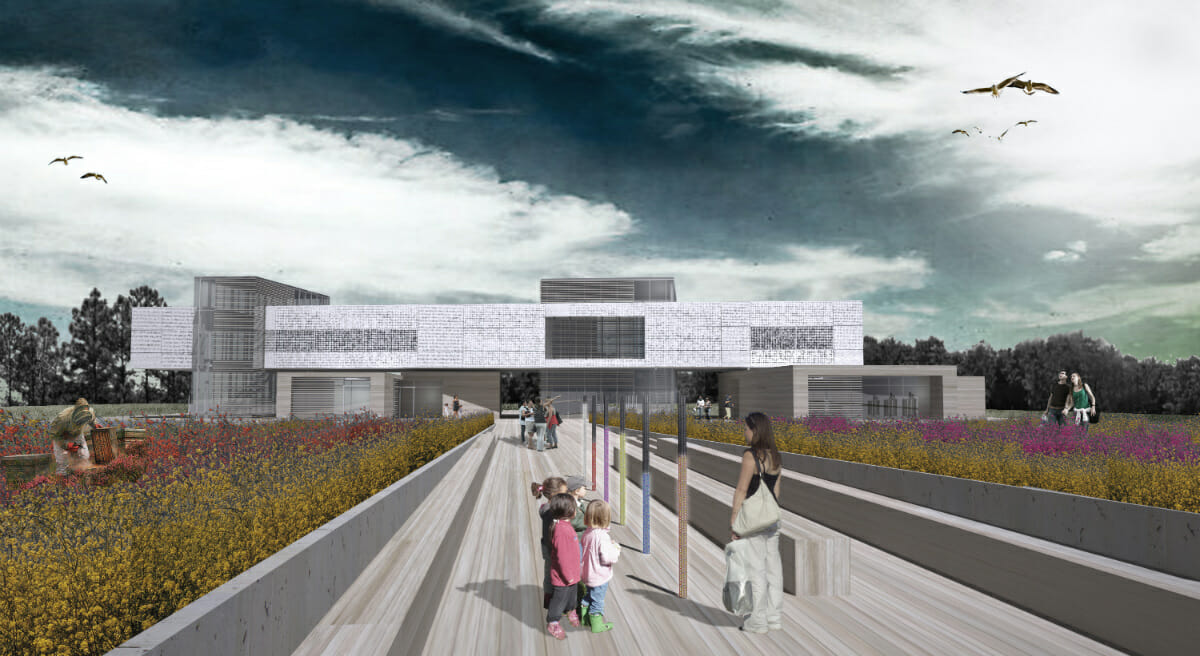 When architect Deborah Berke set out to create the curriculum for her graduate level design studio at the University of California, Berkeley, she knew she wanted her students to think about social, economic and political issues as well as jobs, education and food deserts.

“That’s how we came up with honey,” she Berke, who heads up her own New York-based firm, Deborah Berke Partners, and was recently the recipient of Berkeley’s Berkeley-Rupp Prize, honoring those who have “made a significant contribution to promoting the advancement of women in the field of architecture.”

The ten students in Berke’s class were tasked with designing a honey production facility that could thrive in one of four post-industrial cities: Buffalo, NY, Fresno, CA, Jacksonville, FL, or Memphis, TN. The cities were chosen not just for the unique issues they face as a result of deindustrialization, but for the benefits and challenges their climates pose to bees. For instance, Buffalo’s cold weather means bees need a warm base during winter.

“There’s such a wide range of issues,” said Seema Kairam, who co-taught the class with Berke, “whether it’s pollination, or CCD [Colony Collapse Disorder]. So the students have kind of taken up different issues and tried to frame their buildings as a response to either environmental issues or economic issues.”

Over the course of the Spring Semester, students learned about hyperlocal food production by studying Bay Area culinary businesses, and got a crash course in bees. Their Spring Break was spent visiting a queen bee production facility.

“Our philosophy was that there was no need to redesign bee hives,” said Berke, “and no need to even redesign honey extraction techniques. But that through the design you could make the process visible to the urban culture that’s so completely cut off from where food comes from.”

Below are images and descriptions of the facilities the students created, which were presented to the class and jury during their final critique on May 8.

Designed to sit along Jacksonville’s I-95, a major traffic throughway, B-59 (also pictured at the top of the story) is intended to remind commuters of the effect pollution has on health and the environment. Beekeepers would be able to bring their honey to the site to be processed, but also tested for levels of pollution. The results of those tests would then be displayed on installations using LED lights to show the levels of pollutants present. After testing, the honey would be processed and remediated to remove pollutants. Visitors would flow through the center, learning about pollution issues, the honey process and the role of air pollution in the demise of honeybees.

This project utilizes a historic union terminal as the hub of a series of rail lines. These trains would service honey producing centers throughout the region to pick up raw honey and bring it back to the central manufacturing hub. In a bold move, one train will actually enter the interior of the building, creating a spectacle for visitors who come to visit the site and tasting room. There will also be queen bee production, a workshop and greenhouses.

Bayou Bees is situated between two worlds, repurposing buildings that were once part of Jacksonville’s strip mall landscape, the building extends to the swampland of the St. John’s River basin. Visitors are afforded views of the swamp from long walkways that connect the smaller structure to the main one, and also from the café and learning center. The center would aim to help local beekeepers produce a regional, artisanal honey on par with Florida’s Tupelo.

Fresno is a major medical hub that people travel to in order to receive treatment. Capitalizing on that, the Fresno Apitherapy Center would offer bee-centric medical treatments utilizing products from the hive, as well as spa treatments. The site would also conduct research and offer public areas and a roof garden.

Named for the architect Ludwig Mies van der Rohe, known for his modern and simple style, Mies Bees aims to provide a source of income to those who Fresno’s bustling agricultural economy hasn’t trickled down to. Workshops, kitchens, classrooms, and a tool lending library would be available to the general public, with a focus on migrant farm workers. Visitors would be invited to use the facilities to help develop their own projects and entrepreneurial ideas. The areas would largely be open with access to all, allowing for a free flow of people and ideas. A shaded walkway on the outside of the building would offer passersby a break from Fresno’s hot days.

This structure connects tower-like buildings with three levels to address the needs of Fresno residents. The towers would house specific programs such as education, news and a library, while the connecting floors would provide a supermarket and public spaces, such as a rooftop, where bees would reside. The building would become an axis of commerce and government.

This project envisions turning an old cheese factory in to a building that included a greenmarket, restaurant, garden, indoor nursery and a space for wintering bees as well as for producing honey. Silos on the roof collect rainwater, and a large central gathering area allows for events, farmers’ markets and practical needs such as unloading trucks. Many markets in Buffalo are open seasonally, and only for a few hours, so the large, indoor gathering area could be used to sell local foods year-round.