The Global Guide to Local Honey

Honey is produced in nearly every corner of the world, and a diverse array of vegetation and flora lends distinct flavors, colors, and scents to the golden stuff. Here's just a sampling of just a few unique variants from across the globe. 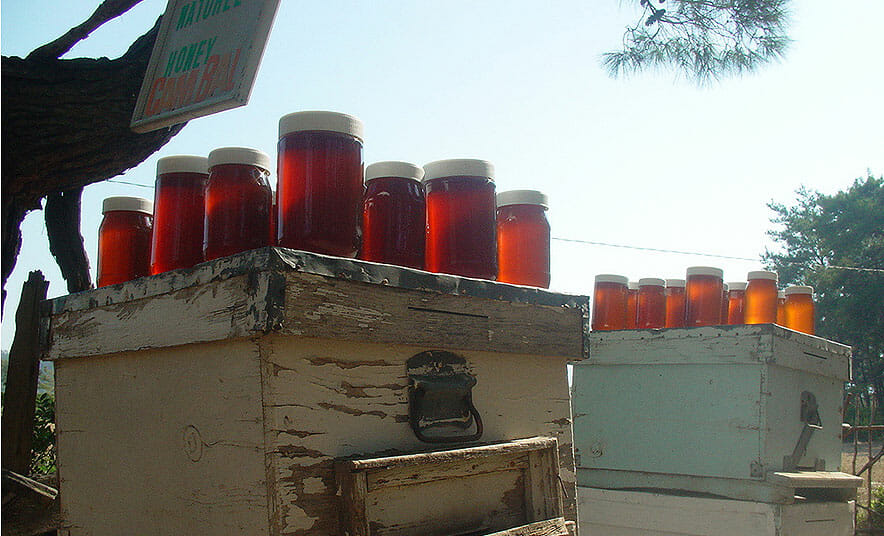 If you want pastries, head to France. If you want bees, go to Slovenia, where the country’s official tourism site promotes bees and honey as an attraction, boasting that theirs is the only country in the European Union to protect its native bee, the Carniolan, famed for its docility. Slovenia is home to famous beekeepers, beehive art, and an apicultural museum. Tending bees is deeply embedded in the culture – a 2008 Wall Street Journal article reported that one in every 250 residents keep bees. Recently, though, Slovenian beekeepers have fallen on hard times – after losing 30 percent of their colonies during the winter in 2012, they were further hammered by drought and frost, drastically reducing the honey harvest. 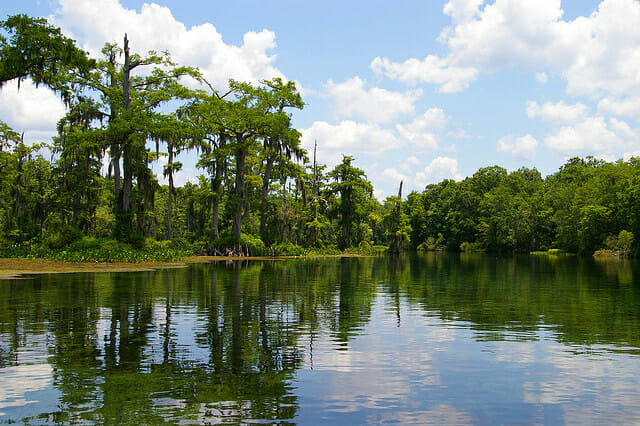 Tupelo honey hails from Florida, where it’s produced from the White Ogeechee tupelo tree that grows along the Ogeechee River, the Apalachicola and the Chattahoochee river basins, according to the Tupelo Beekeepers Association. The properties of Tupelo honey (which was the gold in the Peter Fonda movie Ulee’s Gold) are unusual: pure tupelo doesn’t crystalize like other honeys.

High above Ginza, Tokyo’s bustling shopping district, members of the Ginza Honey Bee Project tend to hives atop the Pulp & Paper Building. Founded in 2006, the organization aims not just to help green the city, but bring urban dwellers closer to nature. The metropolitan setting affords the bees different sources of nectar, meaning that the flavor varies from jar to jar, according to a report in the Japan Times. The honey makers have teamed up with bold name companies to create honey-flavored offerings, like Sapparo’s “Ginza Brown.” 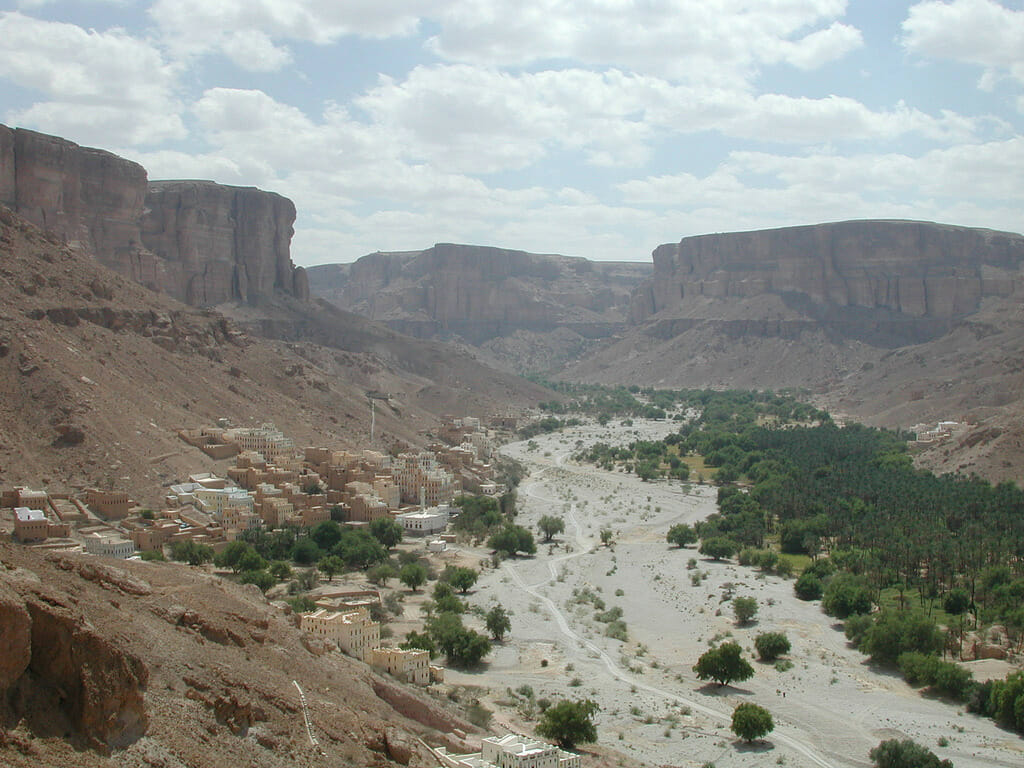 Wadi Do’an, Yemen, where Sidr honey is from. Photo: kebnekaise

Sidr honey, from Yemen, is some of the rarest and most expensive honey in the world, with prices clocking in at over a hundred dollars. It’s priciness has attracted the attention of fakers, and subsequently, a honey detective. In 2001, U.S. officials declared that they had evidence linking two honey shops in Yemen to Al Qaeda, saying that the expensive honey provided revenue and the stores were a cover to ship drugs and weapons which were rendered hard to detect behind the scent of the honeys. In her book “The Honey Trail: In Pursuit of Liquid Gold and Vanishing Bees” author Grace Pundyk described the taste of Sidr honey as “simply orgasmic.” 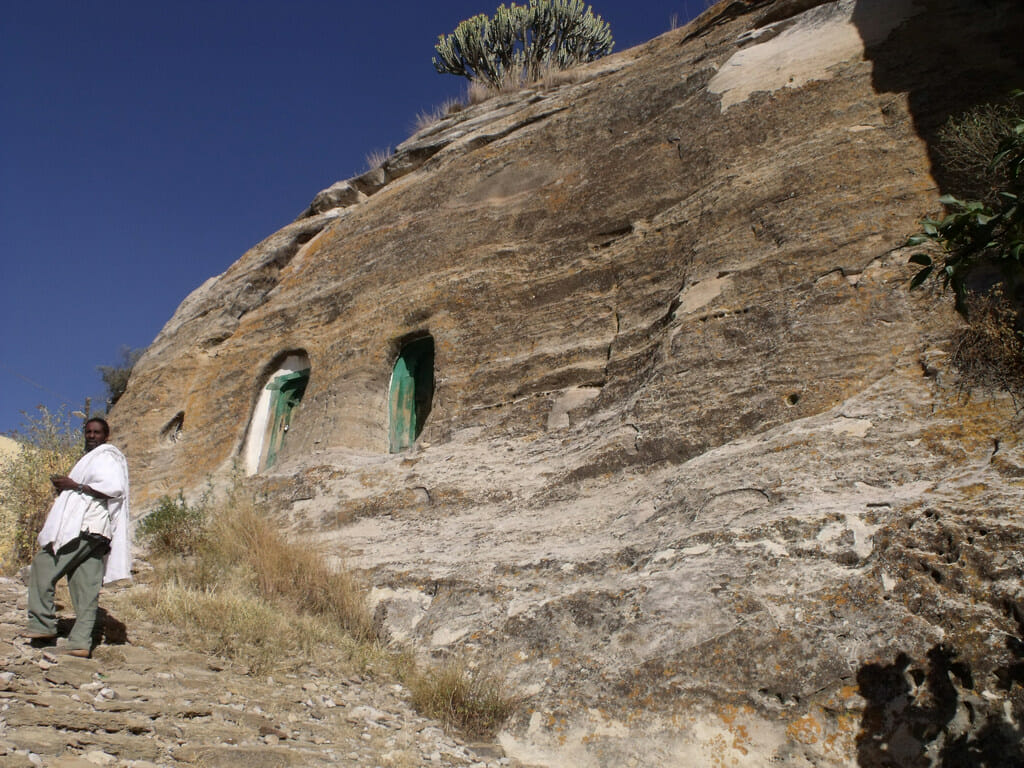 The Ethiopian honey product most consumers are probably familiar with is t’ej, a sweet, golden-colored honey mead or wine. But white honey, produced by bees in the mountainous Tigray region, is a local delicacy. In 2010, the rare honey became even rarer – a lack of rain meant that the pale product reached its highest price ever, according to report in the Guardian. But producers in Ethiopia are working to sustain white honey production. A group of beekeepers in Tigray teamed up with Slow Food’s International Presidia initiative to help build support networks, install new technology for processing the honey, and produce derivative products. 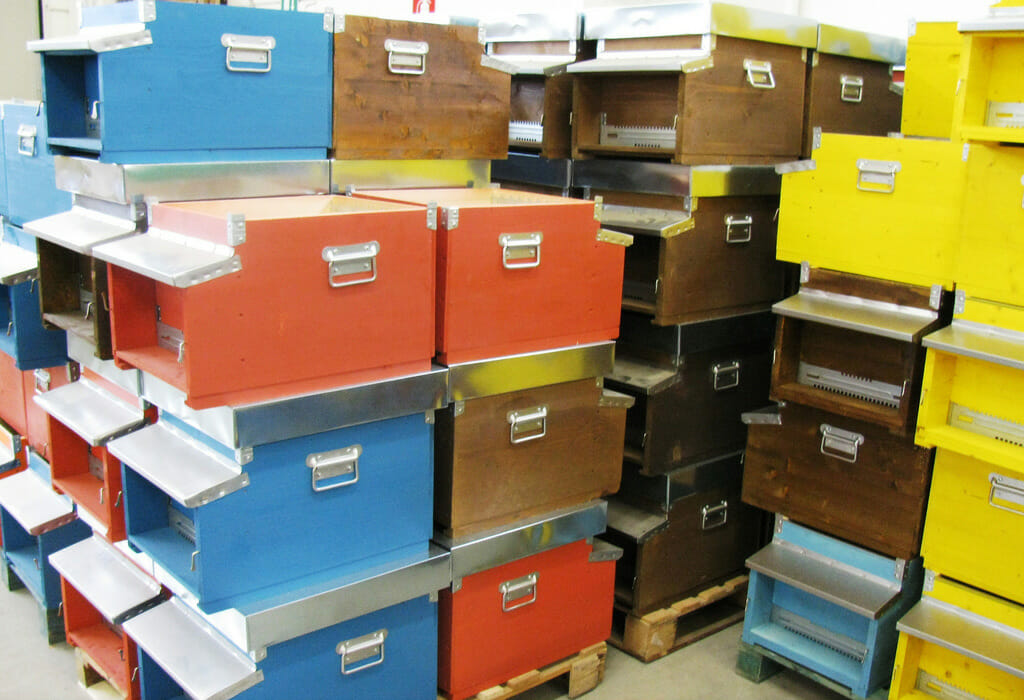 A warehouse full of hives in Lunigiana. Photo: Bottega Arcobaleno

Honey from Italy’s historical Lunigiana region (which spans parts of Tuscany and Liguria), has the distinction of being the first to score a Protected Designation of Origin (PDO) stamp from the European Commission, which means it’s officially recognized as being produced in a specific region using “recognized know-how.” The region is particularly famous for two kinds of centuries-old miele, acacia and chestnut. In Italy’s application for PDO status, they described the acacia as “very sweet, with light acidity and without bitterness” with a delicate, vanilla aroma and the chestnut as “reddish hue” and a “strong and penetrating” smell. 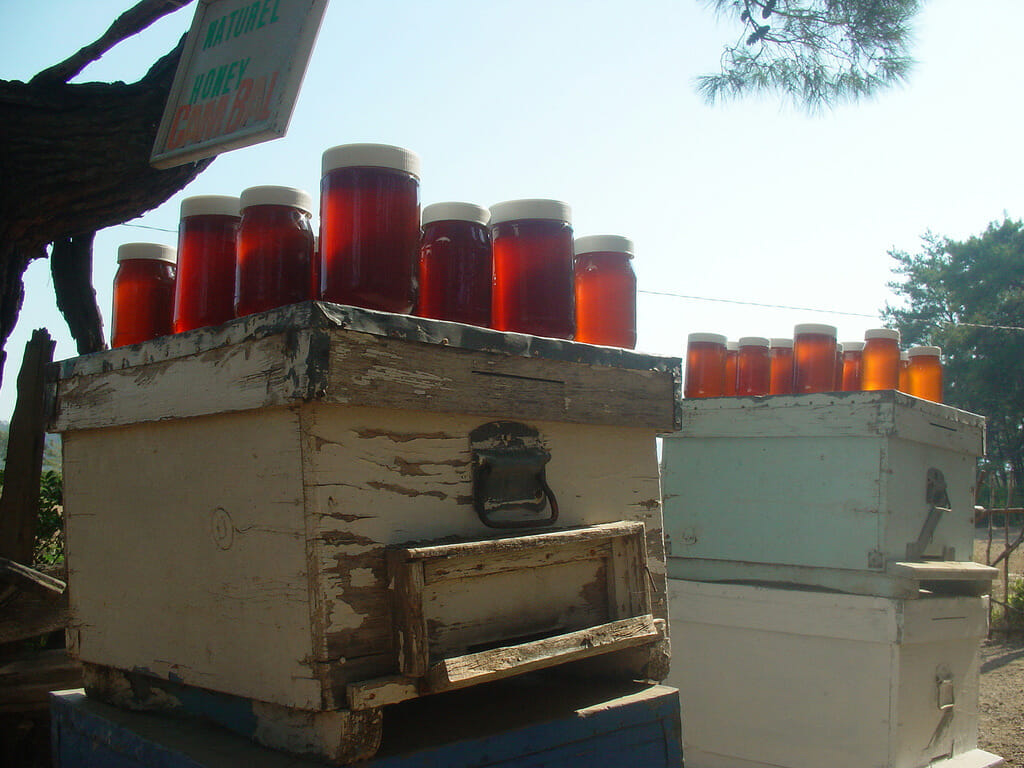 Turkish pine honey in the Mugla province where much of it is produced. Photo: CharlesFred

Turkey produces 90 percent of the world’s pine honey, and it has such a dedicated following, it has its own annual congress. The prized honey is produced when insect pests suck the sap from pine trees, leaving behind a sugary secretion called honeydew that bees then turn into pine honey. Pine honey is darker than most other honeys, and the flavor and scent of pine sap lingers. 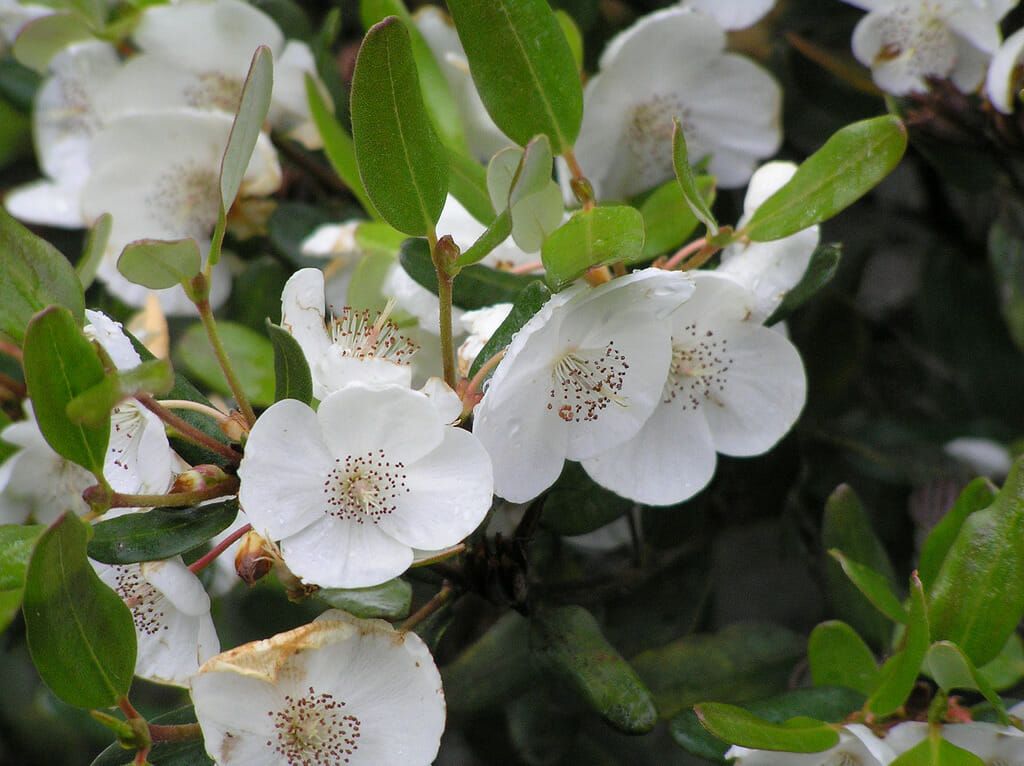 The white blooms of the Leatherwood tree. Photo: mrpbps

Every year, beekeepers in Australia’s island state, Tasmania, truck their hives to the rainforests when the Eucryphia Lucida, or Leatherwood tree’s white flowers bloom. The nearly 1.7 billion bees contribute to a $4 million industry, according to a 2012 Sydney Morning Herald article. The flavor of leatherwood honey has been described as spicy and complex with a floral aroma. But the needs of the producers have often bumped up against those of the forestry industry, which fells the trees vital to the boutique honey makers’ product. 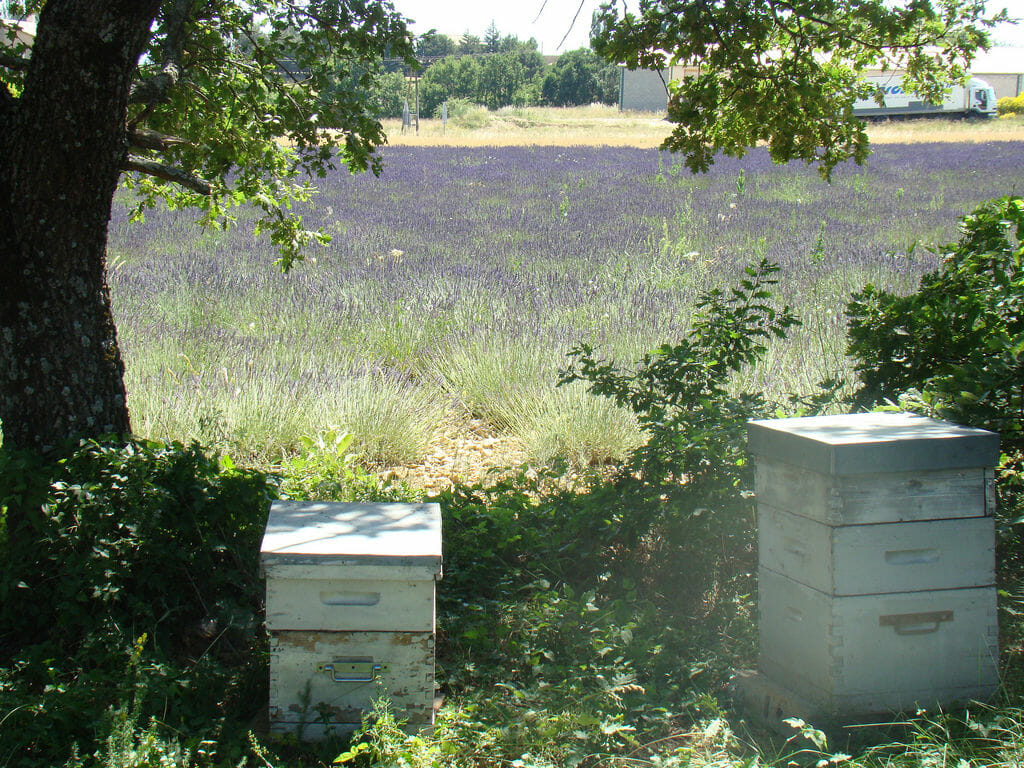 The vibrant purple lavender fields of Provence provide riotous scenery, and most encounter the fragrant herb perched bathside in a salt or soap. But beekeepers make use of lavender, and their bees produce a sweet, fragrant honey. Peter Mayle, in his popular memoir “A Year in Provence” recalls the tables of a farmers’ market “piled high with vegetables, small and fragrant bushes of basil” and “tubs of lavender honey” among other wares. It’s found its way into foodstuffs from truffles to glazed sardines. 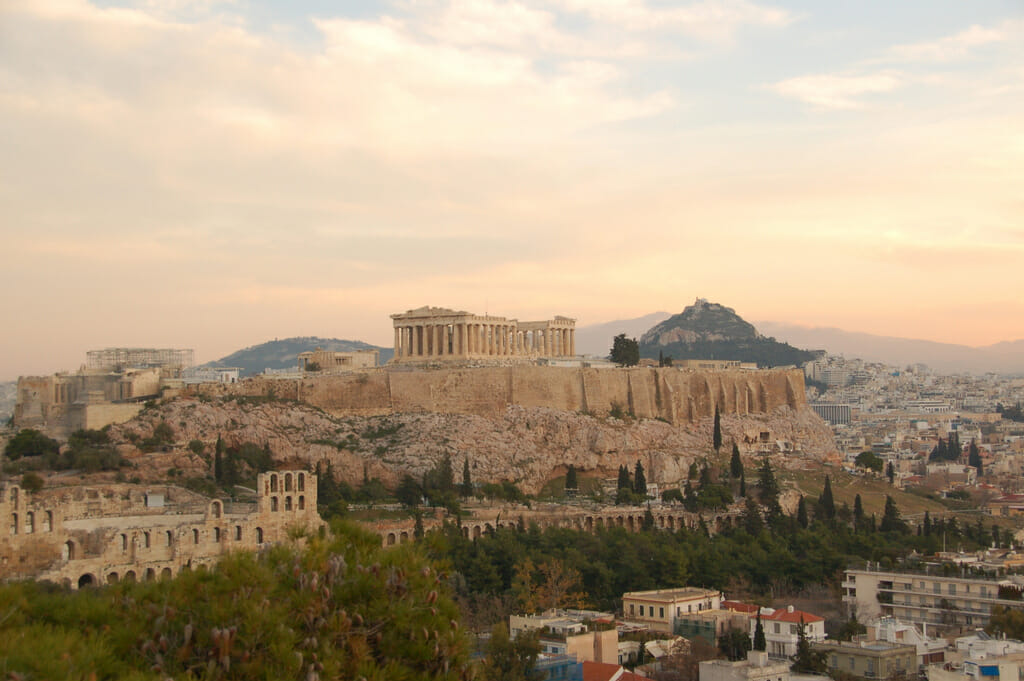 Mount Hymettus rises above Athens behind the Acropolis. Photo: RobW

“It had the rough appearance of homeliness,” reads an account from an 1880 edition of “The British Bee Journal” regarding Greece’s storied Hymettus honey. Despite the rocky start, the writer goes on to declare: “I brought home for my friends a few jars … and it was pronounced to be distinct and superior in its delicate and fragrant flavor to heather honey.” Hymettus honey is produced from thyme, and it is named for a mountain where the herb grows in volume. And writers were musing over the stuff long before British bee researchers put pen to paper. According to the second century military writer Claudius Aelianus, the infant Plato’s mother laid him at the base of the mountain and a “swarm of Hymettian Bees lighted about his mouth as he slept, thereby signifying the future sweetness of Plato’s Tongue.”