The federal agency is abuzz with the conditional vaccine approval, the first of its kind for an insect. 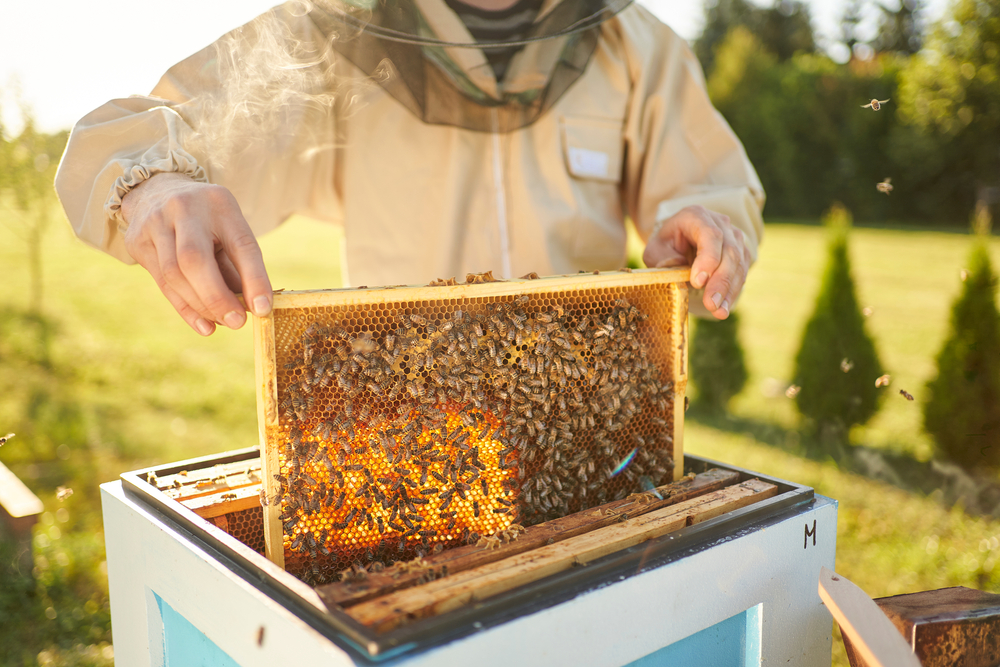 This vaccine could save beekeepers from having to destroy infected hives.
Photography by Shutterstock
Share
Tweet
Pin
Email

The US Department of Agriculture has given conditional approval to a vaccine for honey bees, the first such vaccine intended for insects.

The vaccine is intended to help honeybees—one species of pollinators at risk of extinction, facing habitat loss and other threats—fight back against American foulbrood, a destructive and deadly disease that can wipe out entire bee colonies. American foulbrood spreads through spores and kills bees when they’re still in a pupal stage, essentially eliminating the bee larvae, turning it dark brown and rotten.

But this new vaccine works by cutting off the spores at the source. Rather than injecting the bees with miniscule syringes, the vaccine is fed to the bees and ultimately made into a sugar substance, irresistible to bees: royal jelly, like bee candy. Beekeepers would mix the vaccine into food fed to the worker bees, who then secrete royal jelly for their queen to feast on. Once the queen has ingested the vaccine, it will spread to her ovaries, where developing bee larvae will be exposed to the vaccine, and they will be born with immunity to the disease.

The vaccine comes from a partnership between Dalan Animal Health and the University of Georgia’s College of Agricultural and Environmental Sciences.  “People don’t understand how hard it is to keep bees alive,” said Keith Delaplane, professor of entomology and director of the UGA Bee Program, in a statement. “I can’t imagine a more frightening branch of agriculture to be in. It takes ceaseless attention.”

Once it’s widely released, the vaccine could be a lifesaver—literally—for beekeepers, who presently have to rely on antibiotic treatments with limited success. Trevor Tauzer, owner of Tauzer Apiaries and a board member with the California State Beekeepers Association, said in a statement that such a vaccine would prevent other treatments, such as burning entire infected colonies, as well as all equipment used in their handling. “If we can prevent an infection in our hives, we can avoid costly treatments and focus our energy on other important elements of keeping our bees healthy.”

The vaccine currently has conditional approval for two years. Dalan plans to release the vaccine to a small number of commercial beekeepers over the 2023 season. From there, Delaplane hopes to move from bacterial diseases, such as American Foulbrood, to viral infections, which are tougher to vaccinate against. “It is trickier to create inherited immunity with viruses, yet viruses are front and center in all literature about bee health problems,” he said in a statement. “They have proven to be an intractable problem—my hope is that this partnership can lead to a viral vaccine.”

HOW INSANE to EXPERIMENT in the WILD uncontoolled population! Honey Bees are CRITICAL to life and FOOD on this planet!
We should be ELIMINATING chemicals rather than Vaccinating bees! THIS IS an INSANE amount of risk! Especially if this is a mRNA vax!
Distroibution must be STOPPED!

What could go wrong?

I hope the tainted honey from these bees will be properly labeled so that we can avoid buying it and being exposed to another also oh-so-clever pharma technology.

Won’t that allow the bees to pass the infection to the Honey 🍯…thus being consumed by bears and humans too?!

Ah,, anything pure, healthy and good being targeted. And these global thugs that buy up property in multiple states act as if they are helping us. You can keep your “Modern” farmer techniques….. I will stick with those which are long surviving, and PROVEN without the new poisons engrafted.

because NATURAL pollination is something to mess with…. people smart enough to grow their own crops and honey bees likely wont fall for this, yet unfortunately, if their nucs are infiltrated with bad-bees they will be decimated.