From Backyards to Roadsides, How One Group is Protecting the Endangered Juçara Palm - Modern Farmer
Food & Drink, Lifestyle, Plants

From Backyards to Roadsides, How One Group is Protecting the Endangered Juçara Palm

Why chefs and agriculturalists in Brazil are working together to save this lesser-known superfruit. 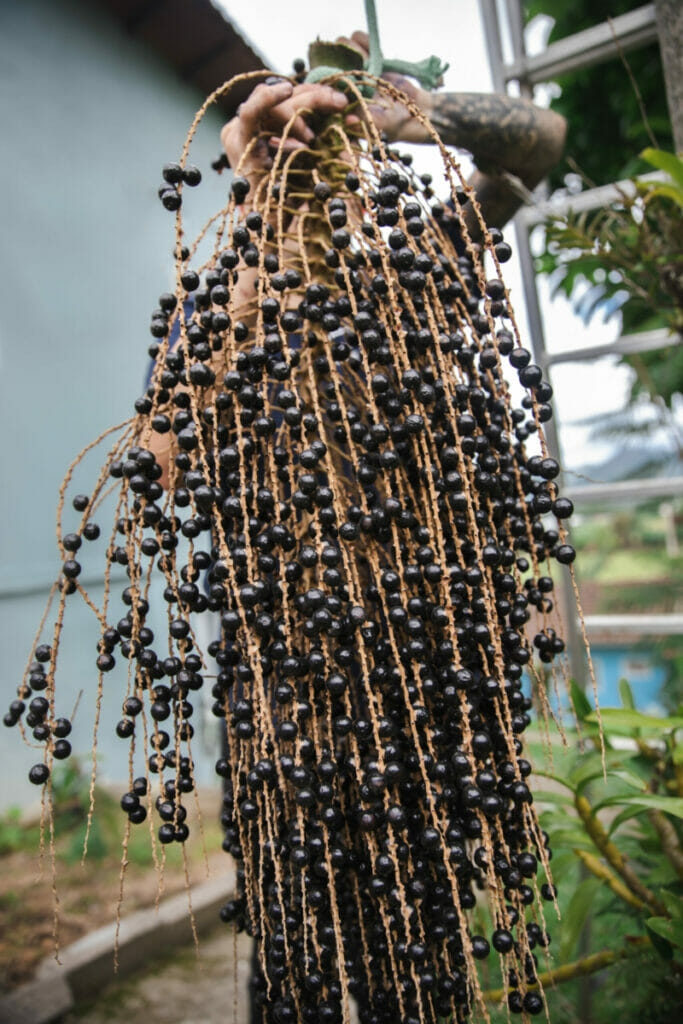 More than 150 species of botanical marvels grow at the Eden Garden flower shop in Itacorubi, Florianópolis, all carefully tended by the weathered hands of Nilton Batista. Two weeks shy of  his 80th birthday, Batista has called the land that surrounds the flower shop home for the past 50 years.

Most mornings, Batista busies himself tending to the diverse assortment of plants at the shop. Today, however, he is joined by agronomy consultant Jefferson Pietroski Mota, local farm-to-table restaurant manager Arthur Viveiros and celebrated UNESCO chef Pedro Soares.

What brought this group of early risers together was the hunt for one species, Euterpe edulis, more commonly referred to as the juçara palm. Their collective goal was to find, harvest and eventually transform juçara’s rigid purple berries into the thick, creamy pulp reminiscent of its more widely known cousin, açaí. In pursuit of the juçara berry, Mota, Batista, Viveiros and Soares weave through neighborhoods on the mainland. Mota strategically identifies roadsides and residences with berries ready to be cut: a technique referred to as “backyard” agroforestry. Knocking on front doors, Mota speaks with locals on the tangible value of the resources in their own yards and pays them for access to the ripe purple berries. 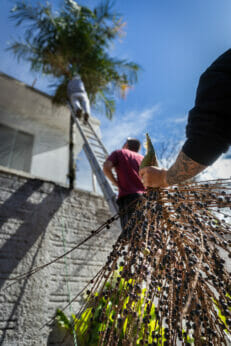 Using metal climbing hooks, Batista secures himself to the juçara tree by wrapping a rope several times around the trunk and clipping the hooks back to himself. As he trims the juçara palms, he is careful not to remove all the fruit, leaving behind 30 percent of the branches for birds and other animals. The chefs rake metal claws through the juçara branches to quickly separate the berries. Chefs Viveiros and Soares distribute the loose berries into lattice fruit boxes and slide the crates into the back of Batista’s truck, ready for their journey back to Florianópolis.

Euterpe edulis is a species of palm tree directly related to maintaining biodiversity in one of the world’s greatest biodiversity hotspots—the Mata Atlântica or Atlantic Forest. More than 21 mammals and 58 species of birds rely on juçara seeds and berries for survival. Birds such as toucans, guans and thrushes and mammals such as agoutis, peccaries and squirrels disperse the juçara seeds. This symbiotic relationship is essential not only for the creatures that turn to juçara as an important food source but also for the proliferation of the species. Animals play a key ecosystem role in dispersing juçara seeds, but they also rely on the juçara fruit as an important food source. Researchers are documenting the local extinction of large seed-dispersing birds such as toucans, cracids and large contingas, while deer and peccaries are also facing population collapses. In an already fragmented ecosystem, the symbiotic relationship between the juçara palm and animals remains precarious for this palm species.

Native to Brazil, the Atlantic Forest spans 2,500 miles over 13 states, yet it is the most threatened biome, with only seven percent of its original forest remaining. Even so, the immense forest houses more than 20,000 different plant species, comprising eight percent of the total plant species found on Earth. To put that into perspective, the Atlantic Forest has more biodiversity in its forest biomes than many continents have across their entire landmass, including Europe and North America. 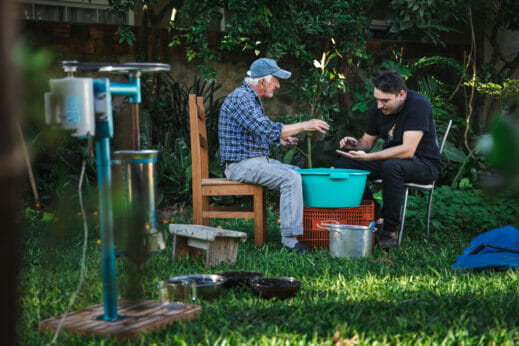 In Brazil, the practice of clearing forests for agriculture—both for industrial and small-scale production—remains one of the leading causes of deforestation and species loss—including the juçara palm. Since the 1960s, the juçara has largely been harvested for its heart of palm. This palm heart—or “palmito”—is renowned as the most delicious. “It’s like lobster,” explains agronomy specialist Mota. “It’s a delicacy.”

The juçara palm also has a key distinction from other edible palm species: It only has a single stem. That means that when the stalk is cut and the heart is extracted, the tree dies. The rise in popularity of juçara heart of palm, coupled with intense harvesting practices, resulted in the juçara palm landing on the endangered species list in the early 1990s.

Although the Brazilian government officially banned the commercial harvesting of juçara heart of palm in 2008, much of it is still cut and sold illegally. “Today, farmers who plant to harvest juçara are often robbed. Thieves arrive in the middle of the night with noiseless electric chainsaws, cut the palm and take them away,” says Mota.

As the perception of juçara shifts and the public begins to see the appeal of consuming juçara for its berries as opposed to its heart of palm, agronomists like Mota see the wide-reaching benefits for both Atlantic Forest conservation and smallholder farmers.

“A producer can have an income of $40 to $50 [Brazilian real] per plant. If they had 100 plants, they would have 5,000 real per year. Imagine after 10 years what they could make just from the juçara fruit,” says Mota.

Community awareness will also play an important role in protecting juçara. Researchers from the Federal University of Santa Catarina confirm that higher-quality, more abundant fruit grows in open ecosystem environments when compared to dense forests. This means palms growing out in the open, such as backyards and sparse roadsides such as the areas Mota identified, represent a promising opportunity for the proliferation of the species. If the juçara palm can be domesticated and even planted for landscaping in local residences, more farmers, chefs and local communities would have direct access to this threatened species in a renewable capacity.

That’s why Mota is working with local chefs such as Viveiros and Soares, in hopes of increasing demand for the fruit. If chefs discover the berries’ many uses and learn how to incorporate them into their dishes, it could lead to more sustainable harvesting practices. “It is a way of valuing the food that arrives for the customer at the table because we know where it came from and through which hands our product passed,” says Viveiros. 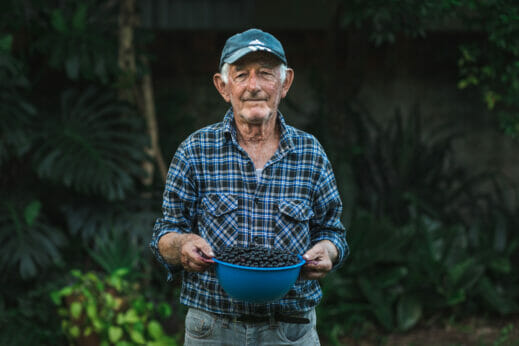 Two months after their initial harvest, Mota and Batista meet again outside of Batista’s home. The men hike through the old milking grounds where Batista’s cows used to gather. Along the way, Batista points out numerous juçara palms that are growing in the forest canopy. The juçara are easy to recognize, with slender trunks and light green shoots that contain their coveted heart of palm.

At 80 years old, it is Batista’s dream to incentivize youth with land in the area to plant juçara. Presently, with the seeds he has collected and germinated from the pulping process, Batista plans to sell, donate and distribute the juçara seedlings to EPAGRI, the agricultural research and rural extension company in Santa Catarina. He will also donate juçara plants to local community groups and sell them to producers who want to buy the plants in large quantities.

Batista’s generation only knew the juçara for its heart of palm. His father owned 50 hectares of land in the interior of Santa Catarina. Growing up, they had so much juçara they would burn it. He now laments the fact his father never got to see the value the juçara fruit could bring. “We were extremely poor. At that time, we had a lot of palmito, but only to eat…Today we would have done a lot with it.”

Together with Mota, the two friends hope to see farmers across the south of Brazil incorporate juçara on their land.

“What I see now is that there is a lot of demand,” says Batista. “That’s the future for those who have land and who want to earn clean money, straight from nature.”

Great research and amazing story telling that brings all to live. Two things stand out for me:

Thanks for shining the light.

Kudos to you all for trying to save the palm trees. I’m crossing my fingers the demand for the berries increase. Happy holidays.

What an incredible immersive research!!! Well worth traveling to Brazil.
Parabéns