Scientists are harnessing the power of the sun to replicate a propane-fueled annual tradition without the carbon dioxide emissions. 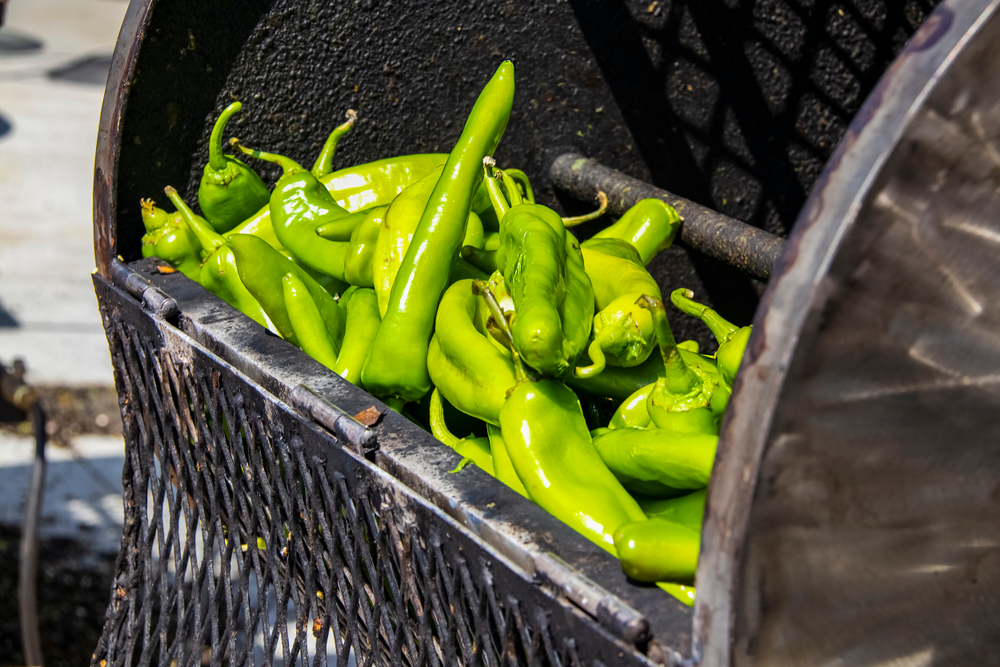 The practice of roasting green Hatch chiles, a prominent ingredient in New Mexican cuisine, softens the skins for easy removal and sweetens the flavor of the peppers. While tasty, the process is a detriment to the environment.

According to a new report by Sandia National Laboratories, the current process for roasting chiles is far from green. The propane used to fire up the peppers leads to 7,800 metric tons of carbon dioxide emissions in New Mexico alone every roasting season (August and September). That would equate to the emission of 1,700 cars driving around for a year.

In an effort to lighten the carbon footprint of blackening the chiles, researchers found a way to use the power of the sun in place of propane. Engineer Kenneth Armijo, who grew up on a chile farm in Sabinal, New Mexico and led the research, created a mechanism to concentrate sunlight using heliostats, which are mirror-like devices that focus the sunlight to heat to roast the peppers.

Armijo and his team were able to create a steel-drum tumbling chile roaster, which operates at the top of a 200-foot tower for optimal sunlight access. The roasting chamber can reach up to 900 degrees Fahrenheit—equivalent to the heat and temperature propane would provide. While the solar roasting system cooks the chiles slightly more slowly, it allows for more uniform distribution of heat, unlike the direct line of fire on which propane roasting relies. 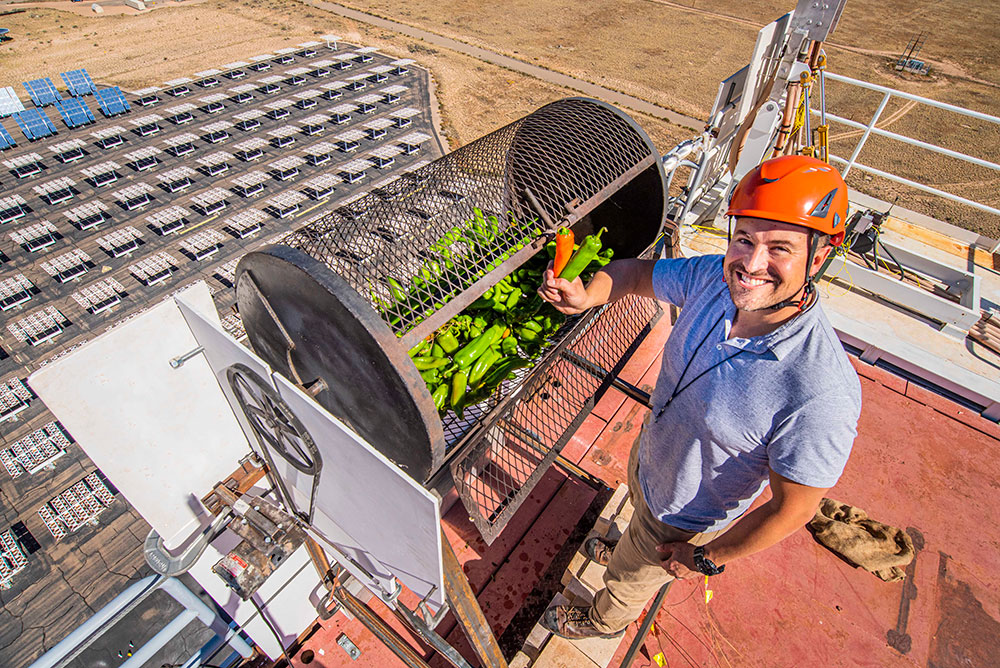 Ken Armijo installs a chile roaster on top of the solar tower. Photo by Randy Montoya.

The experiment found that this method of sunlight roasting has the potential to eliminate up to 2.68 pounds of greenhouse gas emissions per 22 pounds of green chiles. That’s the carbon sequestering equivalent of planting 130,000 trees and letting them grow for 10 years—annually.

Of course, an eco-friendlier pepper would never gain popularity if it wasn’t also friendly on the taste buds. That was a non-issue for the solar-roasted veggies. In fact, in the taste test Armijio conducted, the solar-roasted chiles won out, with tasters enjoying the less burnt, cleaner taste of the non-propane variety.

The initial research focused on green chiles, but solar roasting has the potential for an abundance of other ingredients. The concentrated sunlight could roast things such as coffee, soybeans, cashews and almonds in the future.

While the mechanism Armijo used to solar-roast the peppers is cumbersome and not particularly practical for wide-scale use at its size, he and his team are working to construct a smaller, portable option using the same technology. Ideally, the future device could be transported around to events where the roasting happens.

“In the future, I hope chile roasters will pull up to farmers’ markets and festivals with a trailer with a modular mirrored roaster,” Armijo said in the report. “They just pour the chile in, point the system at the sun and let it roast. That would just be awesome.”

I’d like to know how long it took for the chiles to roast via this method, and what a home roasting setup might look like.
I use a solar oven but it doesn’t get hot enough to roast chiles. For chiles I fire up my propane fire pit and set an oven rack on it.

Popular
7 Smokable Plants You Can Grow That Aren’t MarijuanaBrian Barth
New Solar Panels Allow Farmers to See the LightNaoki Nitta
6 Differences Between Llamas and AlpacasAndrew Amelinckx
This Modern Farmer Wants You to Grow a New Potato StrainBevin Cohen
The Cold Swim HomeMarcie Callewaert
Explore Modern Farmer
Related
Features, Personal Essay, Water
The Cold Swim HomeMarcie Callewaert
Environment, Labor, Water
California Farms and Farmworkers Attempt to Recover From Record FloodsNaoki Nitta
Books, How-To, Lifestyle
How to Turn Your Garden Into a Business, No Matter the SizeEmily Baron Cadloff
Food Waste, Opinion, Politics, Technology
How Solar-Powered Refrigerators Could Cool Down Climate ChangeAbay Yimere
wpDiscuz
We use cookies on our website to give you the most relevant experience by remembering your preferences and repeat visits. By clicking “Accept”, you consent to the use of ALL the cookies.
Cookie settings ACCEPT
Privacy & Cookies Policy