Vineyards Grapple With How to Best Keep Their Workers Safe

As the West learns to live with the constant threat of extreme heat and wildfire, wineries are adapting their vineyard practices with workers top of mind. 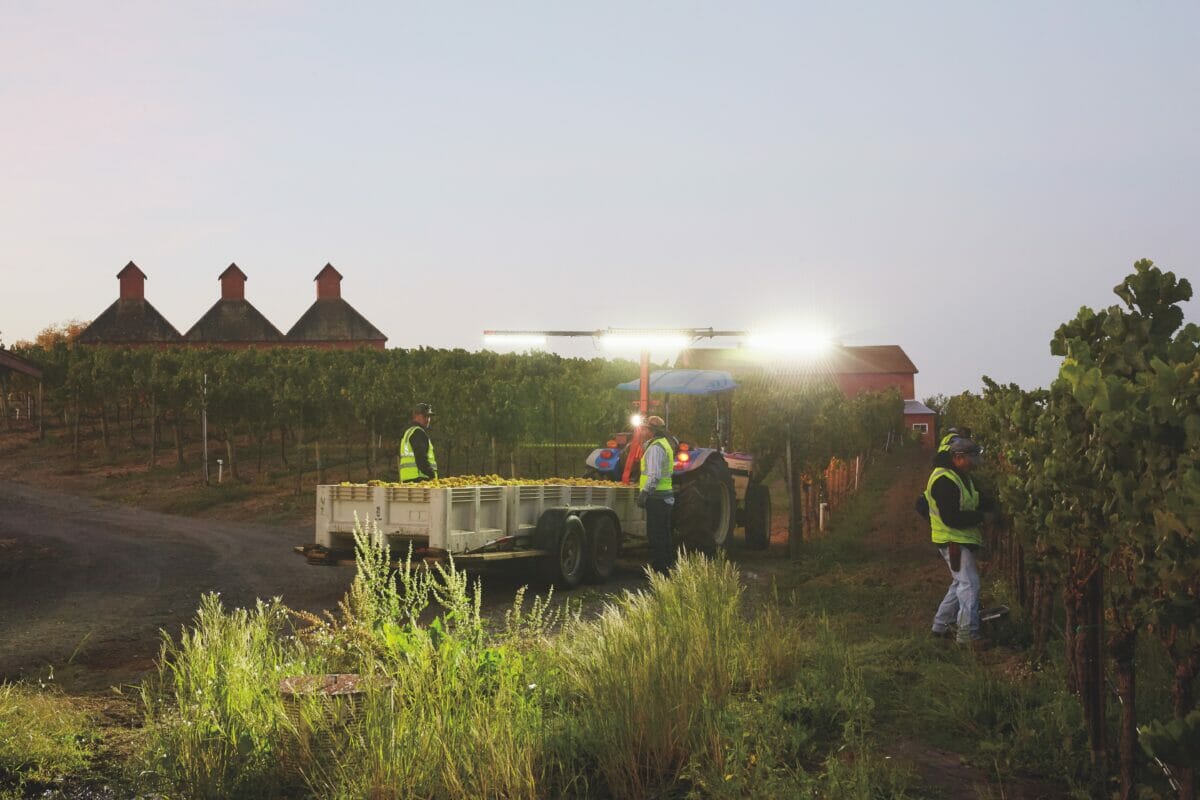 Shannon Donnell remembers a time, just five years ago, when she didn’t see a wildfire break out until late November—well after wine grapes in Sonoma County, California had been fully harvested. Now, Donnell says that wildfires start up right at the beginning of harvest season, typically at the tail end of August, when vineyard workers are most vulnerable and exposed—not just to fire but to extreme temperatures and smoke. In that short time, Sonoma-Cutrer Vineyards, where Donnell is vineyard operations manager, has experienced a wildfire evacuation twice, in 2019 and 2020.

“That fire in 2020, it came right at the start of harvest,” says Donnell. “It did disrupt operations for the next three days.”

In the era of rapidly worsening climate change, vineyards are growing increasingly conscious of how to protect their labor force from fire, heat and smoke. Donnell and the rest of the operations team at Sonoma-Cutrer are diligent, near-obsessive observers of climate conditions and air quality. They communicate their findings with employees out in the vineyard and are continually “checking the pulse,” as she puts it, to make sure that everyone feels safe enough to continue working.

“Yes, the grapes are important,” Donnell says. “But first and foremost is worker safety. There’s no pressure to stay at work. Even if the air quality index is showing that everything is fine, we’re still communicating with and listening to our employees.”

The most common way to protect workers from heat stress during harvest season is simply to pick grapes at night. Sonoma County vineyards have been harvesting grapes at night for around 15 years, and Donnell estimates that around 90 percent of the region’s vineyards are night harvested today. But the original reasoning behind this change had more to do with yielding higher-quality juice (cooler temperatures at night prevent grape oxidation) and less to do with worker protection.

“Really quickly, we realized that crews were jockeying for who got to do night harvest,” says Donnell. “So, in a couple years, we converted all our crews to night harvest. There are so many benefits from the perspective of employees. It’s the reduction in heat stress. There’s a reduction in bee stings, because the bees aren’t out. We also see an increase in productivity, because if you’re picking during the night, you’re cool and you don’t fatigue as quickly.” 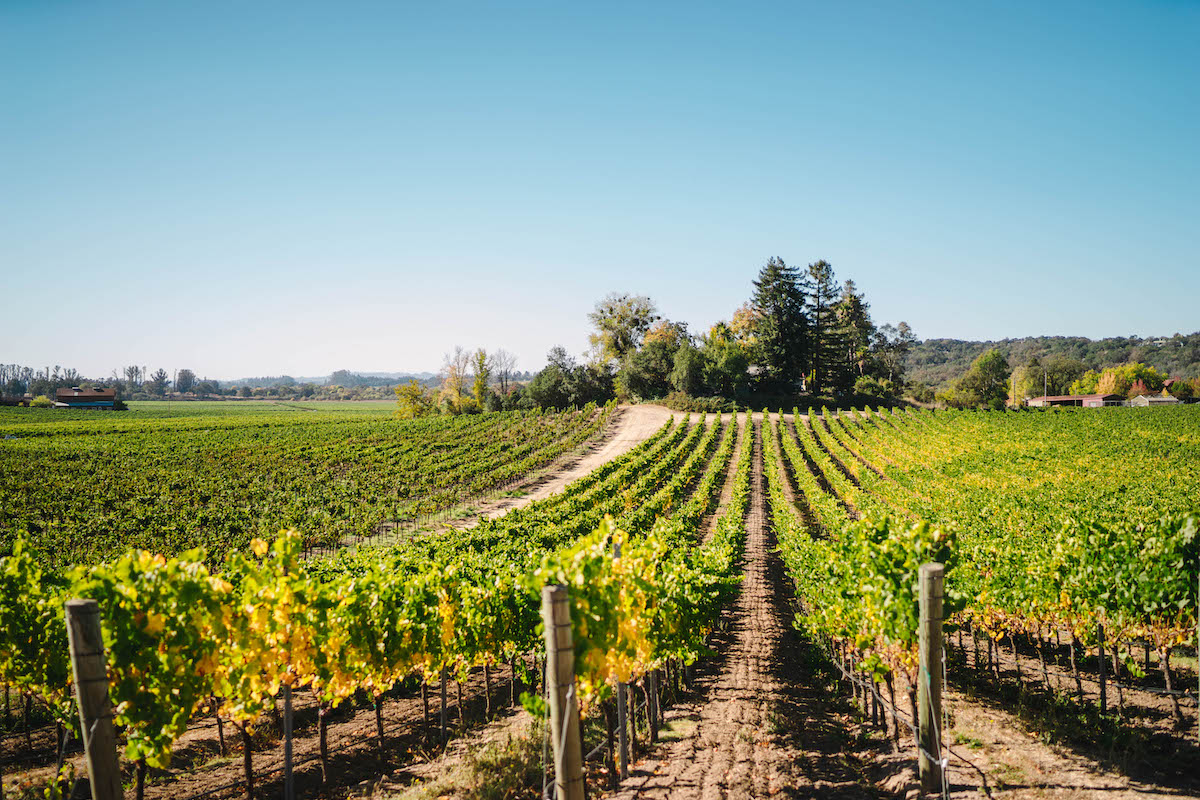 Patrick Norton directs daily operations out in the Sonoma-Cutrer vineyards, totalling around 500 planted acres, which includes teaching crews skills such as pruning, suckering and leafing. Norton has been with Sonoma-Cutrer since 2019, and he experienced what he calls “several extreme heat events” in that time.

“In a vineyard, the heat index is typically much higher than the ambient temperature. During the day, cultivated soils and rocks heat up. The vines are [perspiring] moisture, increasing humidity and the vine canopies block light breezes and slow down winds that may be present,” Norton explains. “After 95 degrees, productivity starts to lag, as does morale. Continuing to work in these conditions is a lose-lose situation.”

Norton says that, as a precaution, he and his crews start working at first light and get as much done as they can as early in the day as possible. It’s not just the threat of high temperatures that hangs over workers as they labor in the vines, though. Smoke poses a serious challenge as well.

[RELATED: How the Pacific Northwest Heat Wave Is Affecting Farmworkers]

“Unfavorable winds can foul the air with wildfire smoke from hundreds of miles away. When the smoke is from local wildfires, there is the added psychological stress of not knowing where the fire will spread or when it will ultimately be put out,” Norton says. “Anyone who [works] in an area where wildfires occur can attest that post-traumatic stress from wildfires is real, stemming from smoke, evacuation and the overall uncertainty that wildfires present.”

That’s why night harvest is so beneficial to vineyard workers: Smoke is not as thick at night because, as Norton explains, “atmospheric pressure is at its lowest at 4 am, which allows smoke to rise.” Night harvest does have its downsides though.

“Shifting one’s sleep pattern to a nocturnal one can be difficult,” says Norton, “and fatigue can become an issue in the long run. It also has impacts on family life as we are catching up on sleep during the day.”

Besides harvesting at night, there are other, newer and more innovative measures that vineyards are taking to protect their employees.

At Willamette Valley Vineyards in Oregon, director of winemaking and vineyards Greg Urmini also emphasizes the importance of open lines of communication between himself, the vineyard foreman and vineyard manager to determine if the work environment out among the vines is safe. He says he’s built a “culture of safety” at Willamette Valley Vineyards, where employees are regularly briefed on the proper procedures for dealing with issues such as heat illness. But Urmini is also aware that talk can only go so far, especially for such physically demanding work in conditions that are harsh on the body—so fair compensation is a central pillar of his worker protection strategy. 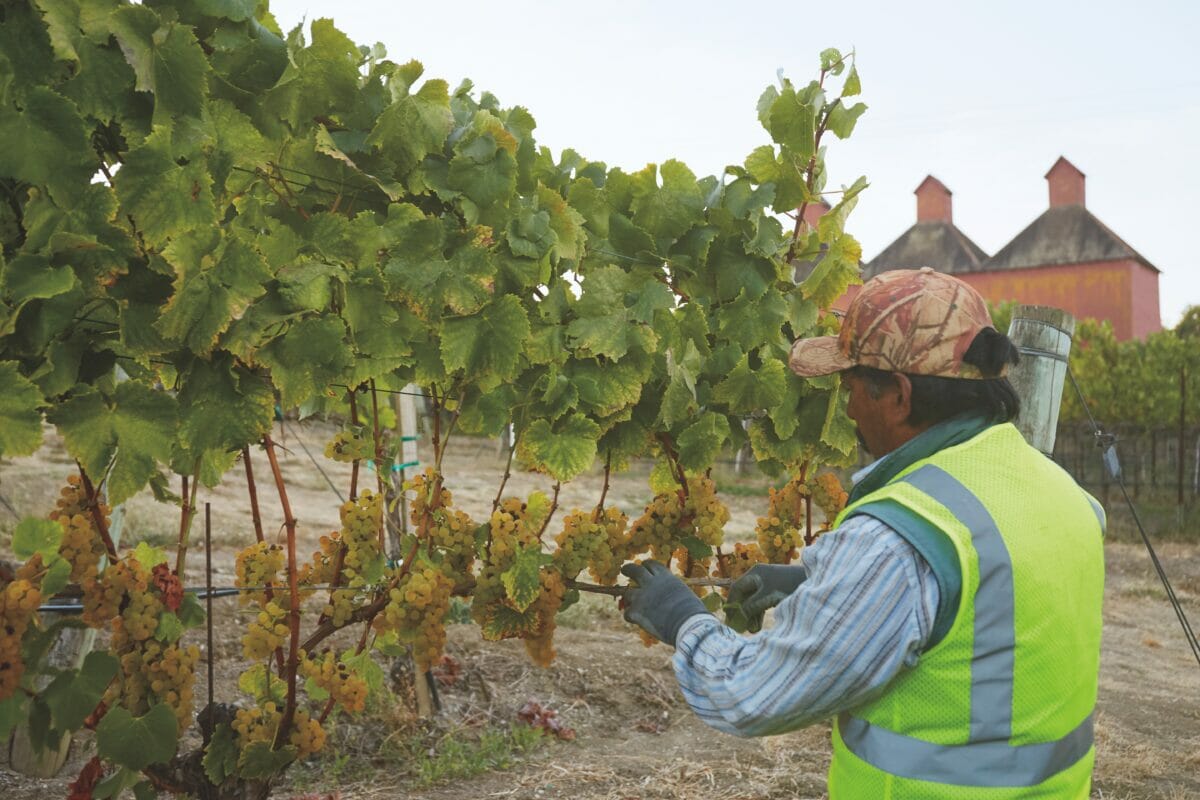 “They get the proper wages, so that they feel they’re being compensated fairly for the work they’re doing,” he tells me. “If you’re working overtime, you’re going to be compensated for that. We’re also able to offer year-round employment, so [employees have] benefits, health insurance, a 401K and paid time off.”

Decent wages will be crucial for vineyard workers as temperatures continue to increase, which will inevitably lead to harsher working conditions, even if vineyards stick to night harvest. Jeff Vargas is the operations manager and safety trainer at Nicola Health and Safety, one of the few Spanish-speaking organizations in California that helps vineyards keep up with OSHA compliance (a crucial benefit in a state where the majority of farm workers come from Michoacan and Jalisco, Mexico).

Where he works, in Napa and Sonoma, vineyard crews have historically been paid a certain rate per ton of grapes harvested. But in recent years, more are pushing for hourly rates, mainly because of how strenuous the work is in the heat. Another reason vineyards must sometimes offer an hourly wage is that wildfires can cause the amount of grapes to fluctuate, meaning that if workers were paid by the tonnage during a wildfire season, they might earn less through no fault of their own.

“It’s not worth their time to get paid by the tonnage like they did 10 years ago,” says Vargas. “They’re leaning more toward hourly rates. Last harvest, I saw a crew start picking, and they stopped an hour in and tried to re-negotiate their pay. It’s so physically demanding, the paycheck isn’t worth the sacrifice on their bodies.”

In addition to a move toward hourly rates, vineyards are also installing new technology to better track changes in the temperate and air quality. Vargas says some of his clients are installing weather stations, a tower that records conditions such as wind speed and humidity and that can be synched up with a smartphone. Another important change he’s witnessed in the past five years is that vineyard managers are stopping work entirely once the temperature hits 95 degrees.

When the temperature reaches 95 degrees, OSHA requires that vineyards implement a series of procedures to protect workers, including offering additional breaks and working in a buddy system. Vineyards must also prove that there is communication between vineyard workers and their supervisors. But because productivity drops drastically at the 95-degrees mark, rather than try to comply with OSHA’s additional guidelines, many vineyards cease operations altogether.

Vargas is convinced that hotter temperatures, combined with elements such as labor shortages, is driving vineyards away from hand harvesting their grapes. One piece of technology that he predicts will become even more prevalent in vineyards as that change happens is the Monarch electric vineyard tractor. Vineyard managers might deploy three or four of these tractors into the vines at one time rather than send out a physical person; this method protects the available workers from heat and mitigates the need for already scant labor. While Vargas admits that some people believe machine harvest “mistreats the grape,” he believes that, “a modern, well-calibrated machine harvester is just as good as a hand crew.

“The [boutique] vineyards will still do hand picking, but they’ll have to pay higher wages. We have a labor shortage here in California, and so you’re starting to see people in vineyards that in the past you would never see. You’re seeing older folks who are not in the best physical condition, and you get them out in the heat, and then they just melt away,” Vargas continues. “The newer generation of people here don’t want to work that way. They don’t want to suffer.”

At Sonoma-Cutrer, Donnell agrees that the future of grape harvesting is mechanized; but if you had asked her 20 years ago, she would have denied the possibility of an all-machine harvest.

“The technology has advanced year over year, and you can get machine-harvested fruit that stays clean and pristine,” she says. “So, I think we’ll see a progression toward machine harvesting, and I think that wildfires could push some of that, because heat illness we can mitigate by harvesting at night, but wildfire smoke, that’s there 24 hours a day.”

For Vargas, making changes to harvest procedure, whether it’s a new type of tractor, higher pay or ceasing operations altogether until the vineyard cools down, are all worth it to make sure laborers can work in sustainable conditions.

“My mother, the founder of my company, said ‘Nothing is so important it can’t be done safely,’” he says. “And, well, a lot of people are starting to figure that out. It’s not worth hurting yourself over some grapes.”

Glad to see this happen, need to happen years ago. Indeed, the workers deserve overtime as well as the best working conditions possible.