These TikTokers Are Turning Trash Into Food Treasures

As dumpster-diving videos go viral on social media apps, a new generation is faced with how to confront the volume of waste in our food supply chain. 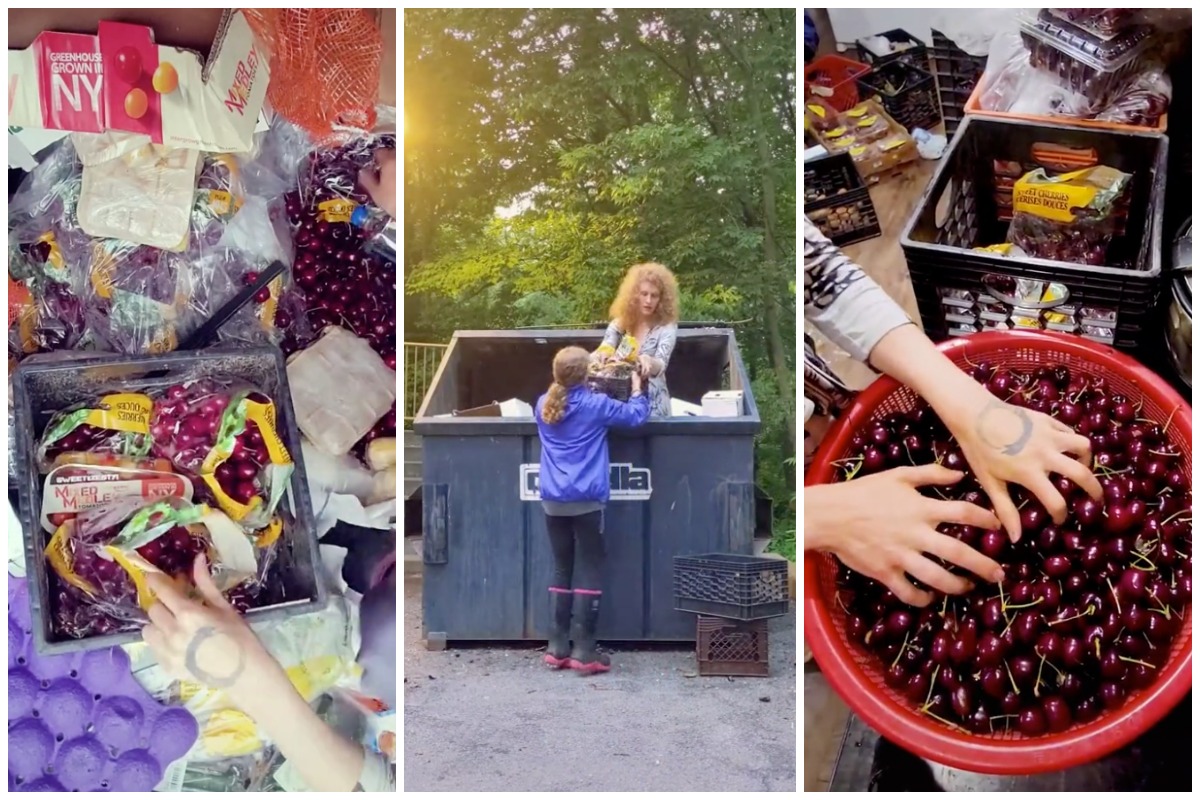 The video opens with Theresa Kadish (@teiresiaskadish) nimbly jumping into a dumpster, kicking her legs, feet clad in purple rain boots, up and off the metal frame and into the bin. She looks excited by what she finds inside.

Cherries. Hundreds of cherries. Bags and clamshells full of cherries that were tossed almost delicately, heaped on top of each other in the dumpster. Kadish bundles as many red cherries as she can into her trusty milk crates and, when she runs out of room, starts collecting them in the clear plastic trash bags on top of which they’re piled. The video then cuts to Kadish’s home, where she thoroughly sorts through and cleans the cherries before piling the haul into four huge bowls and setting them on picnic tables outside. A feast for her housemates and neighbors, all pulled from the trash.

“We ate them, we turned them into wine. We soaked them in brandy, and we dried them. We did all sorts of things,” Kadish says. She’s been dumpstering—or dumpster diving—for 13 years, in an effort to feed people at scale. Kadish has lived communally for years, so she’s always looking for food to feed up to 20 people. A find like that pile of cherries might be too much for a single-family house, but for Kadish, it’s perfect. She uses homesteading techniques to dry and preserve mass quantities of food that otherwise would be tossed away. “I can make use of things that a lot of other kinds of households can’t. I can take in excess tomatoes, and I can make fruit leather. I can ferment things and I can play with all these processing techniques that most American households wouldn’t have access to…What are you going to do with 10 pounds of dried bananas?”

Some estimates show that up to 40 percent of food in the US is thrown out. For grocery stores, that’s often due to food being past its “best-by” date or on its way to rotting, and the stores aren’t able to donate it. People like Kadish, however, see opportunity where others see waste.

She started making videos of her dumpster diving years ago, and more recently switched over to TikTok, where they’ve grown in popularity. That cherry haul has been watched more than 11 million times since she posted it last summer. Other popular dumpstering TikTokers, such as @grab_it_fast, @glamourddive and @binbitches, post videos of the dumpster hauls they make from supermarkets, makeup and clothing stores, even office supply stores. The hashtag #dumpsterdiver has more than 400 million views on TikTok, and #dumpsterdiving has been viewed more than 1.5 billion times.

Some dumpster-diving TikTokers, like Kadish, find their own uses for their hauls, while others give their finds away to neighbors or shelters. One thing these users share, however, is a similar comment. “Did you check the date on that?” “That’s sad. They could donate all of this.” “I would’ve [taken] everything.” With more and more videos adding to the hashtags, many of the commenters are reduced to just one word reactions: “whoa.”

It’s a response with which Bryan Johnston (@bryanjohnston_) is very familiar. The high school senior has nearly 350,000 TikTok followers. After posting a video from his closing shift at Dunkin’ Donuts, Johnston went viral, racking up more than 33 million views. “I actually woke up to a lot of surprising DMs, just people calling me names. They were swearing at me. They were saying pretty awful things over Instagram,”  Johnston recalls.

In the video, Johnston shows what the coffee and doughnut chain does with unsold food at the end of the night. He records as tray after tray of glazed, chocolate- and strawberry-frosted, powdered jelly and Munchkin doughnuts are unceremoniously dumped into the can.

Johnston says he was tired of tossing out so much food every night, and so he decided to post a TikTok about it. When he woke up the next morning, more than nine million people had watched the video, and many were angry when it appeared that Johnston was personally choosing to throw out the food. He fielded a deluge of comments urging him to donate those doughnuts, which he did, packing up leftovers and delivering them to local firefighters and people sleeping on the street. While Johnston didn’t reply to each person, he did try to clear things up in the comments. “I said ‘I’m not the cause of this. I was told to do this, or I don’t have a job.’”

That ended up being the case anyway. Shortly after Johnston’s videos made the rounds online, with celebrities like Billie Eilish commenting on them, Dunkin’ Donuts fired him. After that, commenters came around. “Then people said that I’m a hero. They’re proud of me for speaking now,” says Johnston, who now manages an ice cream shop. He still calls out food waste on his TikTok, where he continues to hear from others about the waste they see at other restaurants.

“I definitely think there should be policies put into place about this,” Johnston says. “The number of Dunkin’s in America is about 11,000 stores. [There are 11,300 stores worldwide, with 8,500 across the US.] If you throw away on average 100 doughnuts a night, that’s over a million doughnuts.”

Of course, TikTok videos aren’t going to prevent all food waste. As Kadish points out, the videos are in response to something that’s already happened. But they can help move the needle on an individual level. “Video is visual, it’s visceral. The stories that I can tell using that medium, they have that kind of immediacy,” Kadish says. “Now, there are cherries in my body that otherwise wouldn’t have been. And that’s good, I suppose. In that tiny way, I’m making the system more efficient.”

Still, she’s conscious of the fact that her videos, while popular and perhaps even instructive, are not overhauling the food system. Kadish thinks a goal of zero waste is impossible. Instead, she says she sees herself as a “decomposer,” part of a food system that isn’t very smart when it comes to generating or distributing food.

“If you go to a grocery store, everything is wrapped in plastic, and these little misters are on the vegetables. And if there’s any hint of decay, it’s immediately removed and tossed to the dumpster,” Kadish says. She hopes that her videos might change some perspectives. She especially likes introducing someone to the inside of a dumpster for the first time. “They get in there grossed out, and when they see all this color, all of this tasty stuff…they’re astonished. There’s a kind of joy that comes from it that is really special. And I feel lucky to have seen it on so many faces.”