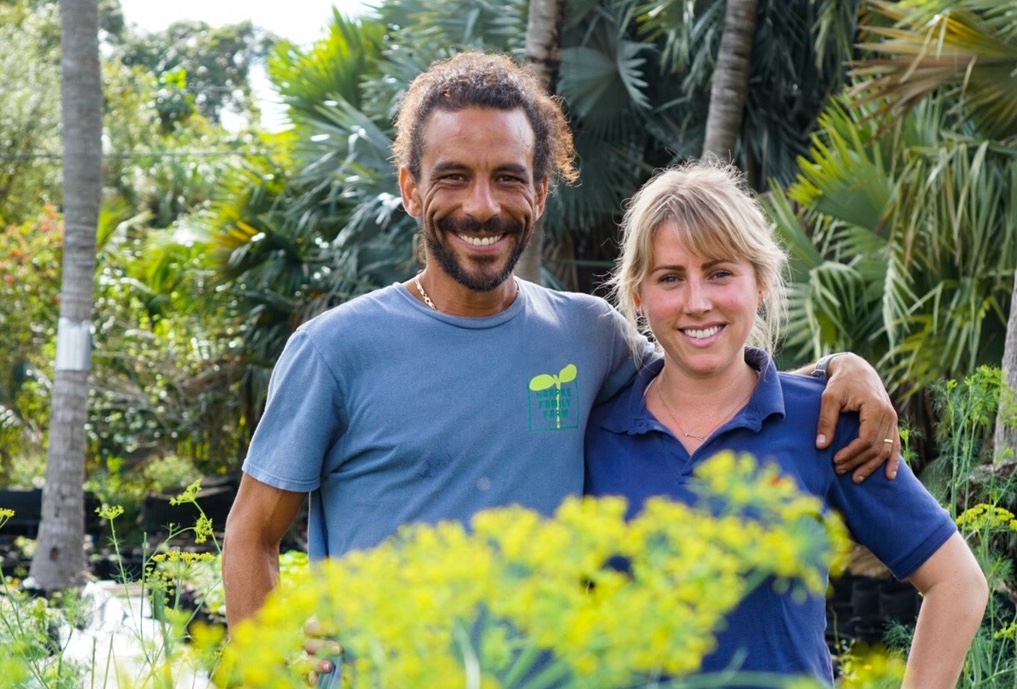 Even as a 15-year-old in his family’s South Florida backyard, Tamer Harpke knew he had a green thumb. His garden was mostly made up of herbs and vegetables, but the climate also allowed Harpke to experiment with growing tropical plants such as collector’s orchids, bamboo and bromeliads.

While gardening started as a hobby for Harpke, he soon incorporated his passion into his line of work: selling wine for an importer. After college, he found himself in the great wine regions of Europe, where he worked grape harvests and learned about the agricultural side of wine production. Back in the US, he visited various cities, hoping to land the farmer-driven wines he sold on the best lists.

During his travels, Harpke noticed that the most credible restaurants, many of which followed farm-to-table principles, focused on where their ingredients were coming from. “That really opened my eyes. As I was traveling around, I’d come home after a week out on the road and just spent all my time in the yard growing stuff. Finally, the light turned on and I decided to take a huge leap of faith and leave a successful career to open a farm,” Harpke says.

In 2013, Harpke and his wife Claire, who also has a background in hospitality, launched Harpke Family Farm, a one-acre operation in Dania Beach, Florida.

“We are farming in zone 10-B on the agricultural map—the southernmost zone and arguably one of the most aggressive climates,” Harpke says.

Instead of fighting against the “aggressive” climate, the couple has decided to lean into it, cultivating what grows best there. The wet climate of South Florida allows Harpke to use growing methods such as deep-water culture hydroponics. They also utilize grow bags that sit above the ground.

“We have found that over the years, we have had no loss of plants due to excessive flooding, compared to some farms that grow in the ground and can lose a whole field overnight,” Harpke says.

Coming from working in the hospitality business, the Harpkes specialize in growing ingredients to meet the needs of a specific niche, providing specialty items to restaurants and the wholesale market. At Harpke Family Farm, they grow microgreens, edible flowers such as lavender and chamomile, Australian finger limes that are known to chefs as “citrus caviar,” and other garnishing items.

“Restaurant and hospitality—that was the world we came from.” Harpke adds. “There were few growers focusing on that segment, except one farm which was leaving the business, as we were coming in.”

Going into the new venture, it was important to Harpke that his customers—which includes chefs, cooks and other restaurant staff—visit the farm themselves and learn.

“We want them to come out to the farm and kick off the relationship by showing them around, tasting produce, teaching them about the process,” he says. “Sometimes you need to peel through some of the layers to find substance.”

By having chefs come out to the farm, Harpke says it not only helps strengthen the relationship between farmers and the restaurants they cater to, but it also cements the importance of staff and future customers understanding more about where their food comes from.

The Harpkes’ produce is especially popular among beverage specialists and mixologists. Edible flowers, for example, not only make a beverage aesthetically pleasing, but also influence the flavor or nuance of a cocktail. Finger limes are smaller and non-rounded limes, shaped like a finger (hence their name), bear a minty aroma with a tangy yet sweet flavor. Makrut limes are also grown at the farm. Their leaves offer an intensely tart citrus flavor when added to a drink or recipe.

Because they utilize greenhouses to grow microgreens, flowers and specialty produce, the Harpkes are able to harvest everything to order. This helps reduce food waste, while also providing their partners with the freshest product possible. “Until we get an order, we don’t cut or package anything,” Harpke says. “We want to preserve the freshness of each delicate item.”

Popular
Could Dissolvable Cranberry Film Replace Plastic Packaging Someday?Emily Baron Cadloff
Alaskan Salmon Face a Stream of New MinesBecki Robins
7 Smokable Plants You Can Grow That Aren’t MarijuanaBrian Barth
Where Has All the Mustard Gone?Chloe Faure
Why Don’t We Eat Turkey Eggs?Dan Nosowitz
Explore Modern Farmer
Related
Animals, MTMF
Meet the Maine Teenager-Turned-Landscaper Thanks to Grazing GoatsBridget Shirvell
Labor, Politics
For Young Farmers, Land Access Will Make or Break the 2023 Farm...Emily Baron Cadloff
Lifestyle
This Kansas Farm Gives Veterans A New Path To Civilian LifeLindsay Campbell
MTMF
This Veteran Farmer Continues to Serve His CommunityBevin Cohen
wpDiscuz
We use cookies on our website to give you the most relevant experience by remembering your preferences and repeat visits. By clicking “Accept”, you consent to the use of ALL the cookies.
Cookie settings ACCEPT
Privacy & Cookies Policy