Yet it remains unclear whether or not offshore aquaculture is bad for the environment. 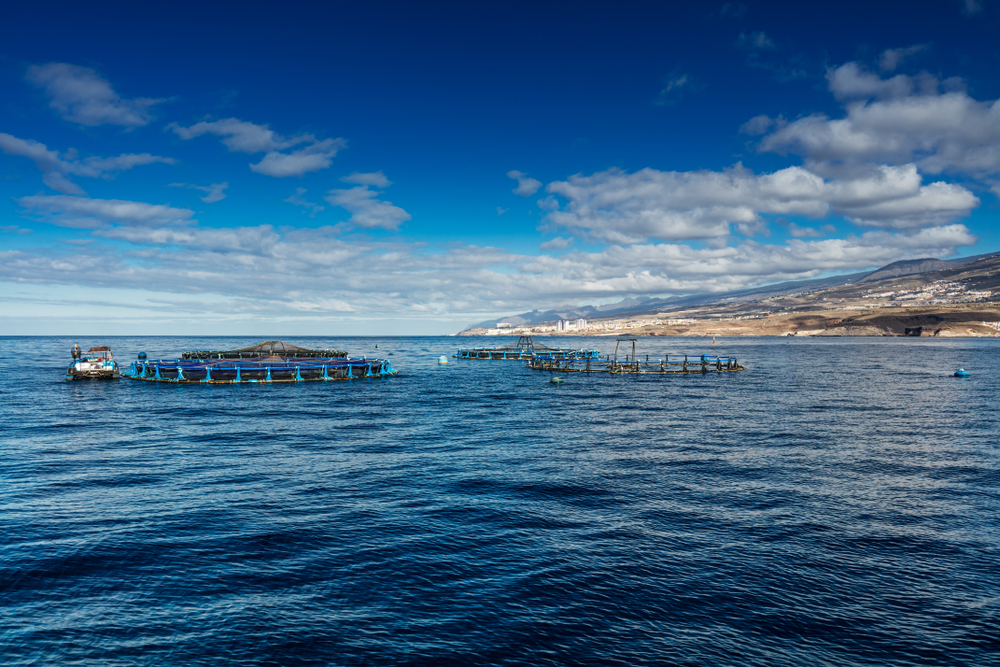 Aquaculture, probably best described as enclosed fish farming, has dramatically grown in size over the past few decades. Globally, it represents about 50 percent of all seafood raised for human production—but not in the United States.

A new bill, cleverly named the Advancing the Quality and Understanding of American Aquaculture (AQUAA) Act, was introduced in the Senate this week. So what’s in it, and why does it matter?

This is now the third time a version of this bill has been introduced in Congress. The goal all three times has been to create a web of legislation that would allow and regulate offshore aquaculture in federal waters. These sorts of operations generally involve large, fenced-in sections of ocean in which fish and bivalves mollusks such as clams and oysters can be grown, fed and harvested.

Proponents of offshore aquaculture say that it’s a cost-effective way to dramatically increase seafood production, which is especially valuable as wild stocks of fish and shellfish decline. Offshore aquaculture is also much less energy intensive than fish farming on land, and it can theoretically result in healthier fish, as they’re able to swim in a larger area. Offshore aquaculture also, although this sort of research is in early stages, seems to be less susceptible to disease.

Opponents of offshore aquaculture fear the environmental effects of a huge amount of animal waste in a small area of the ocean and how that pollution can affect the ecosystems around the pens. There’s also the issue of fish escaping from the pen; escaped fish are almost certainly not native to wherever the pen is, and they can disrupt already delicate marine ecosystems.

To give you a sense of who might benefit from increased offshore aquaculture in the United States, let’s look at the figures and entities promoting this bill. The sponsors are Roger Wicker (R-Mississippi), Brian Schatz (D-Hawaii) and Marco Rubio (R-Florida), all of whom represent states that have substantial fishing operations that could benefit from the legislation. The major organization that has been pushing the bill is called Stronger America Through Seafood (SATS). Voting members of SATS include representatives of Red Lobster, Cargill, the food distribution giant Sysco and a host of fisheries and aquaculture companies.

If you’re wondering why Cargill, which is not usually associated with seafood, would be interested, it’s because Cargill sells a lot of feed for aquaculture operations. Cargill, along with the other huge players in soybeans and corn, would be very excited to have a big new market for their wares. Schatz, as the lone Democrat sponsor, also hails from one of the very few states that has a commercial offshore aquaculture operation already. Hawaii consumes far more seafood per capita than most other states, at almost two times the national average, and has to import most of it (at significant expense).

Although there are a few scattered offshore aquaculture operations in the US now, there’s no standard permitting and regulatory process, meaning that setting up a business has added expense and delays.

Whether an American offshore aquaculture program could be environmentally responsible and economically sustainable depends almost entirely on the details. Some aquaculture operations use wild-caught fish as feed, which can completely throw off the sustainability calculus. (AQUAA says this feed must come from a “sustainably managed” fishery, and one without prior human trafficking violations. Slave labor is extremely common in some seafood operations.) It’s not clear what “sustainably managed” means; there’s no such federal label, and private labels like those from the Marine Stewardship Council are quite weak.

There are essentially no hard requirements for construction and preventing escape; there’s a lot mentioned in the text of the bill regarding creating agencies that would later create those sorts of rules.

Offshore aquaculture has been a topic of discussion for years now; the conclusions of experts usually end with “there are major potential problems, and we need a ton more research before we can figure out if and how there’s a safe way to do this.” Given that this particular bill has already died twice, it’s unclear how likely it is to pass now.

Popular
7 Smokable Plants You Can Grow That Aren’t MarijuanaBrian Barth
New Solar Panels Allow Farmers to See the LightNaoki Nitta
6 Differences Between Llamas and AlpacasAndrew Amelinckx
The Cold Swim HomeMarcie Callewaert
Goat Sex: Everything You Wanted to Know But Were Afraid to AskAndrew Amelinckx
Explore Modern Farmer
Related
Environment, Labor, Water
California Farms and Farmworkers Attempt to Recover From Record FloodsNaoki Nitta
Aquaculture, Technology
Can Interactive Mapping Tools Guide Shellfish Restoration?Bridget Shirvell
Fish, Opinion
Could Lobster Fishing Push One Whale Species to Extinction?Blake Earle
Animals, Health, news, Technology
First Vaccine for Honey Bees Approved by USDAEmily Baron Cadloff
wpDiscuz
We use cookies on our website to give you the most relevant experience by remembering your preferences and repeat visits. By clicking “Accept”, you consent to the use of ALL the cookies.
Cookie settings ACCEPT
Privacy & Cookies Policy