The ‘CyborGoats’ wear a GPS unit around their neck that helps keep them from crossing over a virtual fence. 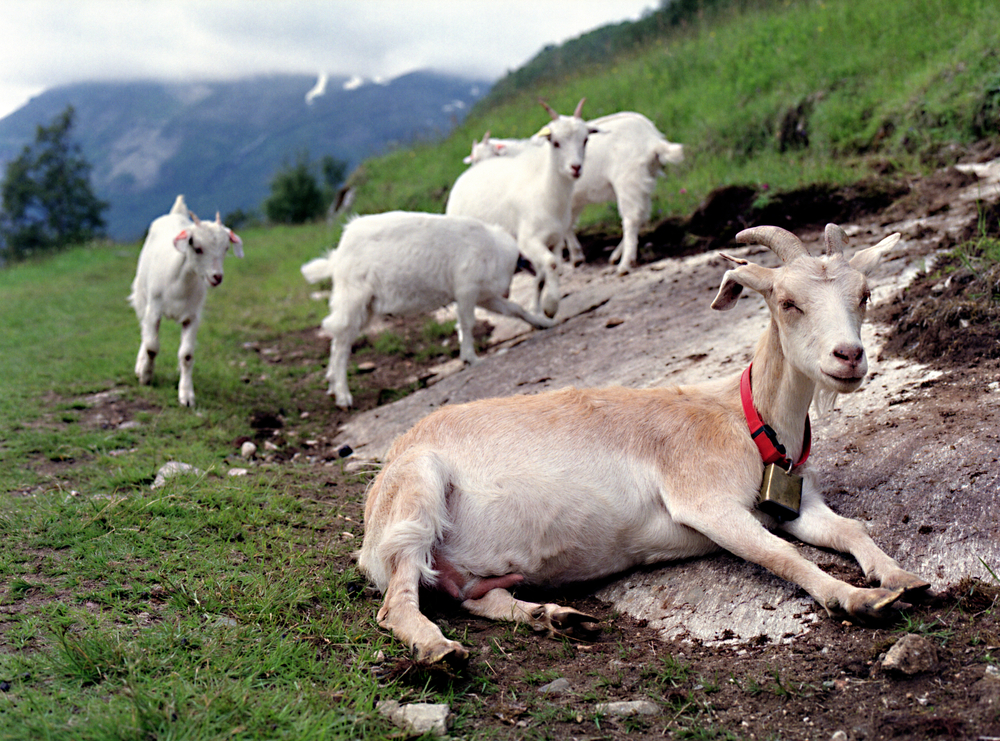 Much of the difficulty in maintaining a herd of goats lies in the particulars of the goat itself. Goats happen to be able problem-solvers, occasionally obstinate and quite physically dexterous. This all makes them really entertaining, but it can also make keeping goats in one area very frustrating. One possible solution to containing them is already in place in Norway: high-tech invisible fences.

A new study from researchers at the Norwegian University of Science and Technology takes a look at the technology created by a Norwegian company that specializes in virtual fences called Nofence, which is an accurate if unadorned name. The study itself is mostly theoretical, with sections named things such as “The new goat as boundaryless boundary-objects,” and it ends up proposing that goats that use the Nofence system are a “CyborGoat”—this is their spelling and their definitions—which is “a being transcending traditional understandings of what a goat is.” Sure!

But the idea of an invisible fence, and especially this variety of invisible fence, is fascinating for grazing animals such as goats. The older style of invisible fence—the name is actually registered by the company Invisible Fence—requires a wire to be installed just under the surface of the ground. An animal such as a cat or dog wears a collar that delivers first a warning sound, followed by a light electric shock, if the boundary of the underground wire is crossed.

There’s been significant debate about the efficacy and ethics of using electric shocks with dogs; the more modern view holds that this form of negative reinforcement can have equally negative psychological side effects for dogs.

Nofence is a bit different than the invisible fence; probably most importantly, there’s no underground cable. Instead, the collar is fitted with an array of sensors, including GPS, Bluetooth, a motion detector and a mobile internet chip, just like a smartphone. Boundaries can be drawn, with no need to lay a cable, using an app; as long as the collar can connect to the network, it can tell where the boundaries are. That also allows rapid and cost-free changing of the boundaries.

This is all undeniably useful. In Norway, where much of the land is mountainous, installing fencing is prohibitively expensive, and this system allows for goats to be contained without having to do any physical building. It also allows for more mindful rotation of pastureland, so the goats don’t graze too hard on any given area; you can just move the boundaries to another zone. Because the system relies on GPS, it also makes it very easy to locate animals that have strayed or potentially suffered some kind of accident.

According to Nofence, nearly 30,000 animals are now outfitted with its system; all are located in Norway. Nofence actually had a bit of a rough go at first; the Norwegian Food Safety Authority declared its product illegal, demanding more in the way of research into the animal welfare of this sort of product. Nofence, like all invisible fences, works on trial and error; an animal must be shocked, and shocked repeatedly, in order to learn the rules of the device. But it has now been legal in Norway for a few years, and it is in use by many herders.

Aside from the whole thought-experiment stuff in this study (“the virtual fence has proven to enable a new type of goat being negotiated forward as a boundary object that transforms the agricultural practices for both human and non-human actors”), the debate over the ethics of electric shocks in livestock is one that continues. Electric shocks are already in wide use in much of the world; cattle prods are used to herd, and cow trainers are used to keep dairy cows from moving. While they’re widespread, these techniques have come under fire as potentially cruel.

Check out eShepherd in Australia for another take on this. The large areas that cattle roam over in Australia makes traditional fencing prohibitive in many cases. Also useful to rotate pasture usage.