First Evidence of Tobacco Use Dates Back Over 12,000 Years - Modern Farmer
Plants

First Evidence of Tobacco Use Dates Back Over 12,000 Years

The plant’s use predates agriculture, but how humans were utilizing it then still is not entirely clear. 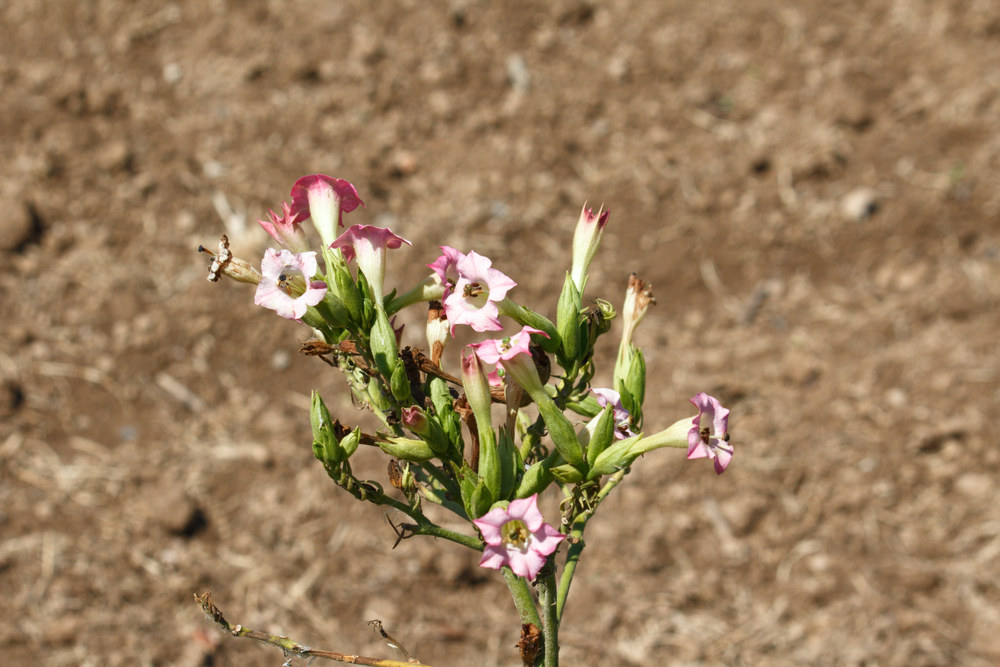 Tobacco may carry negative connotations with it now, but the tobacco plant has been used for thousands of years. Just how many thousands, though, may have just undergone a big change. Researchers from the Far Western Anthropological Research Group just published a study indicating that tobacco use may go back much further than was previously thought—to a whopping 12,300 years ago, at least.

Tobacco is native to the Americas and has had as large and culturally significant a spread worldwide as other New World plants such as the tomato and the chile, despite it being technically toxic to ingest. Tobacco’s properties as a stimulant have given it a very long history in the indigenous population of the Americas, where tobacco use has been found to predate agriculture.

Until now, the oldest evidence of tobacco use was uncovered in what’s now Alabama, in the form of residue in a pipe. The indigenous communities of eastern North America have what was thought to be the earliest use of tobacco. As it was totally unknown to the Europeans when they arrived in North America, they recorded the use of tobacco in what’s now the northeast United States, and not long after, Virginia grew to become an agricultural powerhouse on the strength of the tobacco trade.

Tobacco itself, though, is believed to have originated in southern Mexico. It’s unknown whether it spread north from there naturally, owing to warming climates following the most recent Ice Age, or whether humans simply liked it and planted it wherever they went.

A new study examined the findings at what’s known as the Wishbone site, an archaeological dig in Utah’s Great Salt Lake Desert. (It’s named after the duck wishbones found there.) Among the other stuff the researchers found in a preserved hearth there, including bird bones and stone tools, were tobacco seeds. It’s apparently pretty tough to identify exactly which species of tobacco they were, but the researchers say they strongly resemble coyote tobacco, which is today found all over the American West.

The evidence, say the researchers, points pretty strongly to human use of tobacco. It’s not a common food for birds, it would have been kind of an unlikely fire-burning fuel given what else was around at the time and it doesn’t seem to have grown exactly where the hearth was. None of this can really be proven, but the signs point to the people at this site having intentionally gathered and then prepared tobacco.

So, who were these people? They were hunter-gatherers, the earliest population in the region now known as the Great Basin, and probably hunted mammoths in addition to the waterfowl such as duck that has been preserved at sites such as Wishbone. It’s not clear exactly what these people were doing with the tobacco; the seeds themselves contain little nicotine, so it’s possible that the seeds (which can stick in the leaves and stems) were sort of a waste product that wasn’t smoked or chewed.

The site dates to about 12,300 years ago, which puts this tobacco use around 9,000 years ahead of the previous oldest finding and around 10,000 years before the domestication of tobacco and all the other crops that led to agriculture. Tobacco may be responsible for nearly half a million deaths per year in the United States alone, but the connection between humans and tobacco seems to be an extremely ancient one.

Related
Environment
Maryland Attorney General Sues Monsanto for Environmental DamagesDan Nosowitz
Environment, Plants
Will Hempcrete Ever Catch On?Judith Matloff
Food & Drink
Global Shortage Causes Québec to Releases Half of Its Strategic Maple Syrup...Dan Nosowitz
Food & Drink, Plants
How Vermont Became an Unlikely Hotbed for SaffronSophia F. Gottfried
wpDiscuz
We use cookies on our website to give you the most relevant experience by remembering your preferences and repeat visits. By clicking “Accept”, you consent to the use of ALL the cookies.
Cookie settings ACCEPT
Privacy & Cookies Policy