How the Pacific Northwest Heat Wave Is Affecting Farmworkers

With temperatures climbing over 100 degrees for days on end, conditions are especially hard on farmworkers who can find no respite from the sun. 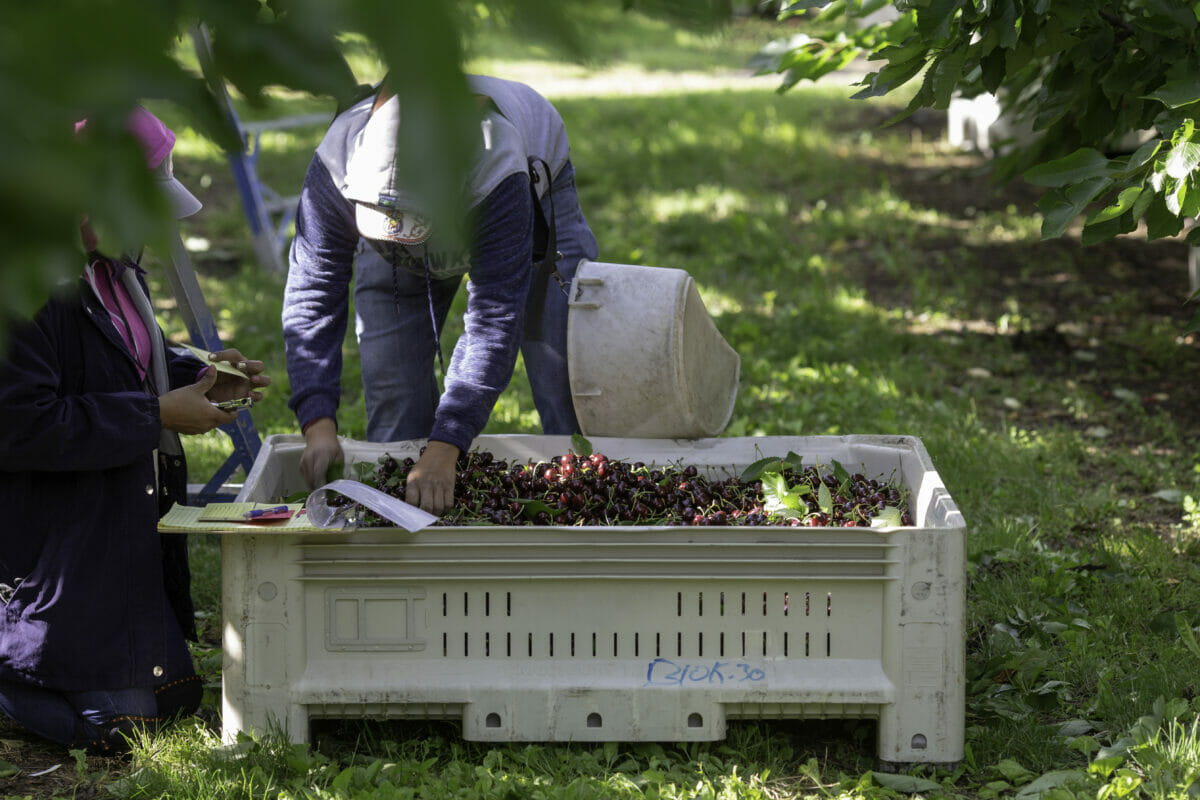 One man is dead, and there are concerns that others could become seriously injured if precautions aren’t taken to help farmworkers through the current heat wave affecting the Pacific Northwest.

Temperatures reached 104 degrees on the day the unidentified man, who was working on a farm in St. Paul, Oregon, died from heat-related causes. According to a representative from the Oregon Occupational Safety and Health Agency (OSHA), he was part of a crew moving irrigation lines last weekend. At the end of his shift, he was found unresponsive in the field. Oregon OSHA has opened investigations into both the Ernst Nursery and Farms, where the man was working, and Brother Farm Labor Contractor, the company that supplied workers to the farm.

The death, while devastating, does not come as a surprise. It’s peak season for cherries in Washington, Oregon and parts of California, where temperatures have recently hovered in the 90s, soaring above 110 degrees in certain areas. The weather pattern, known as a heat dome, is causing temperatures to spike 25 to 50 degrees higher than usual for this time of year.

When the heat is at its most punishing, cherries become soft and easily bruised. It’s best to pick them in cooler temperatures to avoid spoiling the crop, but with the excessive heat, they are ripening faster. Many growers are now trying to keep crop loss to a minimum, harvesting them before it’s too late.

While there is a push to get the fruit off the trees quickly, labor rights advocates are calling for better protections of the farmworkers doing the picking. “It’s a crisis,” says Elizabeth Strater, director of strategic campaigns with the United Farm Workers (UFW) union, which has been sharing stories of the grave risks workers are facing in the fields, where they’re picking cherries in extreme heat. 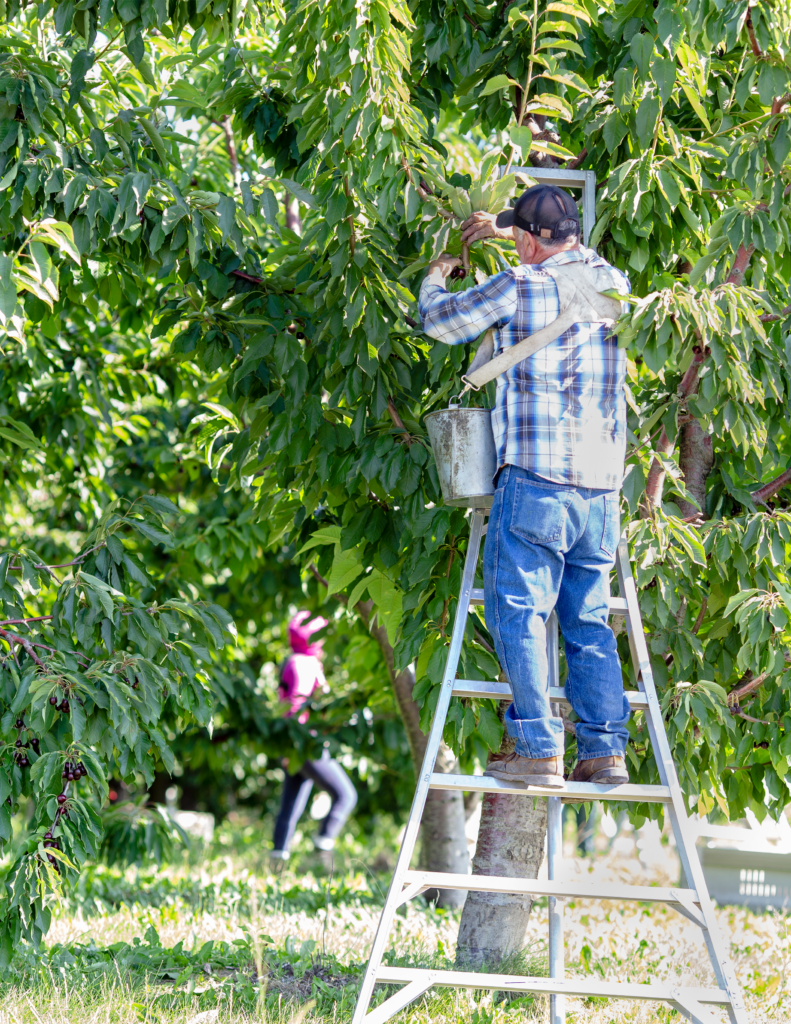 Many of the farmworkers across the Pacific Northwest are migrant workers, coming from Mexico and countries in South America. There are reports that the man who died in Oregon was from Guatemala, only arriving in the United States a few months ago. Many of these workers do not have sick days or vacation time, and they rely on a per-piece rate for the fruit they pick, often averaging about 30 cents a pound.

Because of rules around food safety, workers who pick fruit and vegetables are also often not allowed to have water or drinks with them as they work, as they risk contaminating the food. This means workers often don’t—or can’t—stop regularly to hydrate and find shade. “Life expectancy of a migrant farmworker is 50 years old,” says Strater. “They die of heart disease and they die of kidney failure. Why do they die of kidney failure? Because their kidneys have been destroyed by being chronically dehydrated.”

Even with the health risks associated with the heat, farmworkers will keep going, both because they need the wage and because they are afraid of retaliation. “They’re afraid that maybe they can be threatened with their immigration status,” says Chelsea Dimas, a candidate for a city council seat in Sunnyside, Washington. “You know, there’s a lot of things that they have to think about, so they just deal with it.”

Dimas grew up on cherry orchards, and she started working on the family farm when she was 12, picking and hauling fruit. Over the weekend, she visited half a dozen orchards across Yakima County to hand out water and sports drinks to workers, and she documented what she saw. “We didn’t see water stations, we didn’t see cooling areas,” she says. Even with increased regulations, Dimas noticed that many of the farms weren’t upholding those standards for workers.

Although individual farms differ on specifics, industry officials are pushing for wider safety measures. Jon DeVaney, president of the Washington State Treefruit Association, says his agency is trying to stress the importance of proper hydration and shade breaks for workers, as even experienced farmers can be affected by the heat. “It can sneak up on workers. They think, ‘Oh, I’m fine’ or think that they’re OK, until it’s gotten ahead of them,” says DeVaney. “And so, everyone really needs to be reminding themselves [that] you need to take a water break, you need to be thinking about this.”

Some growers have shifted their picking hours to start before sunrise or have installed lanterns in the fields to pick at night when the temperature is cooler. James Michael, vice president of marketing for the Northwest Cherry Growers and Washington State Fruit Commission, notes that most of the cherry growers live and farm in near-desert climates.

“Most orchards utilize sprinklers below the canopies, which lowers the temperatures for all but the outermost fruit,” he says. “Orchard netting has also become much more common over the past few years, and the modest shade it provides can help lower the sun’s heat and intensity on the trees underneath it.” Those precautions are as much for the crop’s benefit as the workers.

Although it’s too early to know what the impact of the heat dome will be on the Northwest’s cherry crop, we’ve already seen the toll it’s taken on farmworkers. Labor advocates such as United Farm Workers are calling on Washington Governor Jay Inslee to install emergency protections and to extend current regulations.

The health and safety rules governing outdoor heat exposure state that employers have to encourage their employees to drink enough water, and provide them time to do so, but that the employer does not have to provide that water for them. It also notes that, ultimately, employees have their own “personal factors for heat-related illness.” The regulations are also seasonal, in place only from May through September. Groups such as the UFW are pushing for stronger protections for workers that include mandated shade and rest breaks, hoping to prevent the recent farmworker death in Oregon from becoming a regular occurance.

The Washington Fruit and Berry Commission, an industry group, has attempted to address some of these worker-safety issues, including putting into place practices that encourage employees to stay hydrated. But critics of the organization say these measures are not taken seriously enough.

Related
Environment
High Winds Are Rattling US Farmers This SpringSarah Kuta
Dairy, Environment, Technology
Can Biodigesters Save America’s Small Dairy Farms?Anne N. Connor
Health, Labor, Politics
The Meatpacking Industry Drafted Trump’s 2020 Order to Keep Plants Open At...Madison McVan
Food & Drink, Food Waste
Measuring the True Amount of Food Loss on FarmsEmily Baron Cadloff
wpDiscuz
We use cookies on our website to give you the most relevant experience by remembering your preferences and repeat visits. By clicking “Accept”, you consent to the use of ALL the cookies.
Cookie settings ACCEPT
Privacy & Cookies Policy