How Signing Up for a CSA Transformed the Way I Cook

On learning the beauty of cooking seasonally. 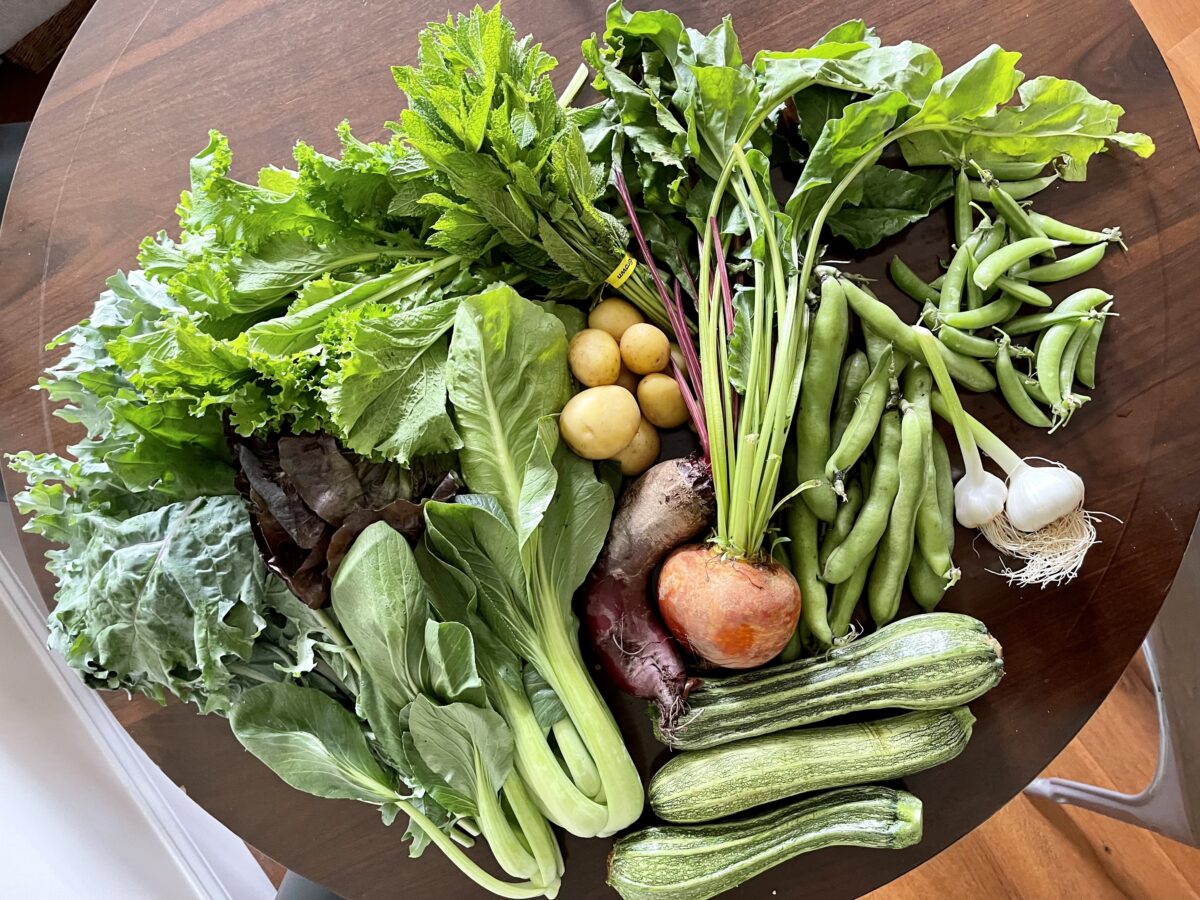 I signed up for my first Community Supported Agriculture (CSA) membership when I was in college in Philadelphia. Broke and bored with the small rotation of basic meals I’d repeatedly prepare in my bare-bones kitchen, the idea of not having to pick out what I’d need to cook each week sounded appealing. Supporting a local farm was an added bonus.

Most CSA programs require you to pay for a whole season’s worth of food upfront—a challenging task for a college student living on a small budget. Luckily, I found one that allowed me to pay for mine on a weekly basis. For $20 a week, I got an assortment of fresh fruit and vegetables grown nearby at Highland Orchard Farms, which I picked up at a farmers market two blocks away from my apartment.

Prior to joining the CSA program, I viewed cooking—and eating in general—as a chore. In the midst of recovering from an eating disorder, I struggled to find joy from food. Growing up, my mom used to joke that I’d one day have to marry a chef if I ever wanted to eat well. Cooking, in my eyes, required too much prep and skills I didn’t have. If I could have afforded to dine out for every meal, I would have.

That shifted as soon as I brought my first share of fresh produce home. I remember laying it all out on my kitchen table, which occupied a corner of my tiny studio apartment, enamored by all the shapes and colors of the leafy greens, purplish peppers, golden cherry tomatoes and graffiti eggplants. There’s something incredibly special about knowing where your food comes from. That I was able to talk to and meet the farmers who grew it that morning and enjoy the fruits of their labor for dinner was a novel concept to me—something I had never experienced while growing up in the suburbs.

As the boxes of fresh produce kept coming, I slowly found my footing in the kitchen. Instead of fearing the unknown, I grew excited to cook with new-to-me vegetables such as kohlrabi, fava beans, garlic scapes and mustard greens for the first time. I learned to build up my pantry essentials so I’d be prepared for whatever produce showed up that week. If I always had arborio rice, white wine and stock on hand, for example, I could always make a simple risotto with mushrooms or peas or asparagus. If there were always tortillas in the fridge and a can of beans in the pantry, I could toss whatever greens and herbs together for tacos. And if I always had tomato paste and boxes of dry pasta stored away, I had no reason to splurge on takeout from the Italian restaurant around the corner. I could make a healthier, veggie-filled version myself for much less.

By the end of my first CSA season, my view of vegetables shifted in a meaningful and lasting way. I used to think about vegetables as an adjunct to protein, something to accompany a piece of steak or chicken breast on my plate. With my bounty of fresh vegetables from my CSA, I learned to build meals around them. And I discovered that vegetables really do taste better when they’re in season. (I’ll never trust a “fresh” tomato in the depths of winter again.)

Since signing up for my first CSA program, I’ve outgrown that tiny studio apartment and moved to three different cities. Thankfully, my cooking skills have grown with me along the journey. In each new place that I’ve lived, one of the first tasks I’ve done to help me feel at home is search for a new CSA for which to sign up.

Earlier this year, I moved to a new city. It’s been challenging to get acquainted with my new neighborhood during a global pandemic. But now that CSA season has rolled around again, I’m finally able to settle into a familiar routine. A few weeks ago, I picked up the first box of my new CSA program from Norwich Meadows Farm. The first thing I did was unpack the contents, laying out the kale, potatoes, fresh garlic, bok choy, beets, lettuces and herbs on my kitchen table, cheerfully describing to my boyfriend all the things I looked forward to cooking with them.

And then I got to work.