From California to New Hampshire, they haven’t met a piece of land they didn’t like. 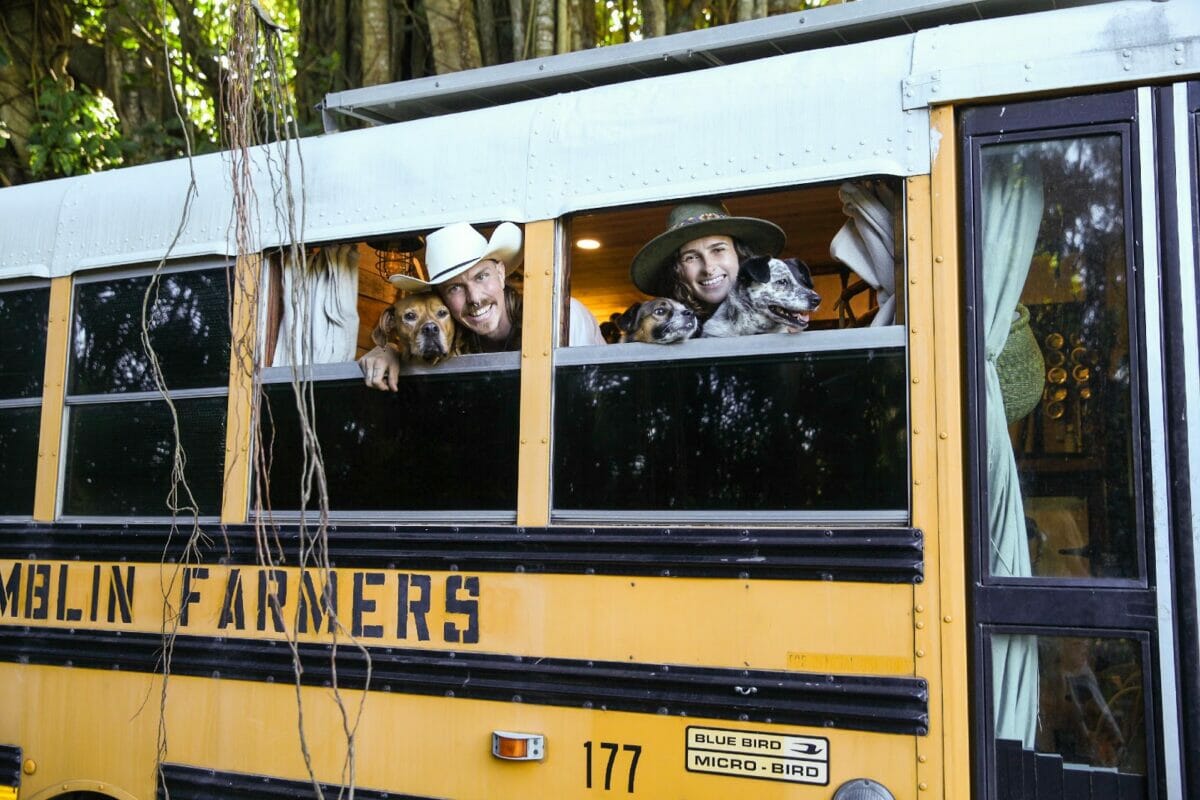 When Logan Hailey and Justin “Cheezy” Taylor roll up to new pastures in their bright yellow school bus, it becomes clear at first glance they’re not your average farmhands.

With three dogs in tow and an entire tiny home packed inside their bus, the husband-and-wife duo let their nomadic tendencies dictate their next move.

“We combine our two deepest passions, which, ironically, are like the antithesis of each other: farming, which is super sedentary and then travelling and being in the wilderness,” Hailey says. “We have this continual, energizing flow of camping in the wild, being on the road, settling and helping on a farm and then going back in the wild. What I love the most is we’re always with Mother Earth.”

The couple, who operate under the business name “Ramblin Farmers,” say they’ve developed the first “freelance-farming” model in the US. With expertise in organic, regenerative practices and six years of working on farms ranging from one acre to 100, they founded Ramblin Farmers LLC in January 2020. Their model allows them to provide services on farms in various locations for short periods of time. This could be days, a few weeks or a month, they say. Sometimes, based on where they decide to settle, they’ll reach out to local farms to pitch their services. Other times, clients will reach out to them when they find themselves short on labor.

The idea to merge travel with farming evolved from Hailey and Taylor’s life in their late teens and early 20s when they spent their time hitchhiking, dumpster diving, busking and sleeping under the stars.

“We wanted to find freedom,” Hailey says. “… but we were actually dependent on ‘the system’ that our young minds so despised…We eventually came to the conclusion that learning to grow our own food was the most essential step towards self-sufficiency.”

In 2015, Hailey enrolled at Oregon State University in the school’s Ecological and Sustainable Horticulture program while the pair was building their own homestead.

Two years later, they embarked on their first farming apprenticeship in Montana, igniting their passion for soil health and regenerative agriculture. In 2018, they worked a full season on a farm in Oregon while they renovated their school bus. By December 2018, they had finished their mobile tiny home and set off to Washington State to work on another farm for the duration of 2019.

Despite the chaotic nature of COVID-19, the couple says their self-contained setup has allowed them to live out their dreams over the past year. Since launching Ramblin Farmers in 2020, they’ve travelled from Oregon to California to Colorado, Kentucky and New Hampshire. This voyage consisted of varying gigs, from helping small farmers pivot to CSA-focused models when restaurants were shuttered to modifying a farmers market’s operations to create faster flow of customers under pandemic restrictions. Right now, they’ve settled in the northeast to help one client build an incubator farm.

Generally, they say, it’s been an exciting time to help producers navigate sudden changes in their local food systems. As the demand for local food across the country has increased, it’s also provided them with hope that more people will think about where their food comes from and select more products that are sustainably grown in their community.

“Seeing the connection that people forge between the land and their community and the way that food brings people together at a time when people can’t always physically be together has been inspiring,” Taylor says. “The connection that we can also have nurturing these different ecosystems and the impact on environment and climate change it has is huge. I feel I’m part of something bigger than myself.”

In the future, Hailey and Taylor hope to take on more of a consulting role to help farmers implement organic practices, no-till techniques and education in soil microbiology on farms.  It’s important to them, they say, to build on the movement of farmers who believe in eco-friendly practices. And although they aren’t tired of travelling yet, they do anticipate that day will come. Until then, they see their journey to various states, cities and towns as a chance for them to scope out what could be their final destination for a forever farm.

I have a small forever farm for you! We live near the Wet Mountains in Colorado. 77 acres and 40 is irrigated hay. We are retiring and our farm needs someone that loves farms and cattle.

I admire what you you two are doing! Especially as a married couple. Very cool. Has your school bus ever broken down on the road? Do you need to have liability insurance & health care insurance? Good luck and I hope you find your forever farm!

Lots of people living off the grid. Nature’s way is the way. Caution not for the manicured . We are Organic farmers…see you on the trail. Peace 👍🙏

Good for them – were I young I might do the same sort of thing. I could use some help for about a week or more on my down-sized organic gardens – – used to have sheep, chickens, geese, ducks, etc., but got a bit much for me (widow) – – is there a way I can contact them? I’m in Jonesboro, Maine on the coast………..thanks – Nancy O.