A new study finds that installing solar panels results in roughly the same sheep production—plus, a ton of free energy. 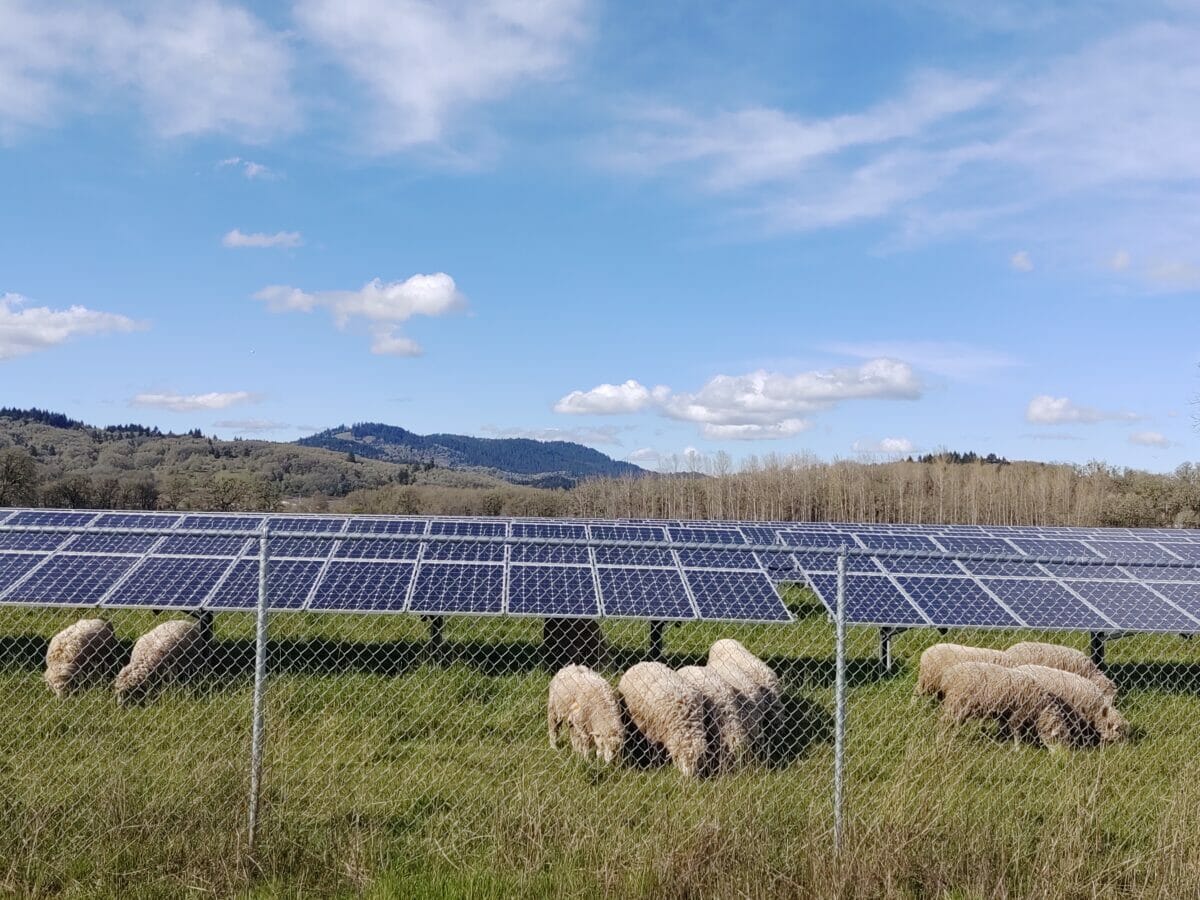 The term “agrivoltaics” refers to an agricultural system that shares space with solar panels. One concern about such a system is that solar panels, being still relatively inefficient, require lots and lots of space. If that space is taken up with solar panels, how can it also be used for agriculture? However, a new study out of Oregon State University finds that pasture land could be ideal, creating minimal losses in yield while providing lots of renewable energy.

The study examined sheep pastures in Oregon over two years, measuring their efficiency both with and without solar panels installed. The key to measuring this kind of efficiency is that there are all kinds of different metrics to use, which all contribute to a holistic understanding of benefits and drawbacks.

At its absolute most basic, the return from grazing without solar panels came in at $1,046 per acre, while the land with solar panels returned $1,029 per acre. That’s close enough to be essentially equivalent. But that figure does not include the financial benefits of the electricity produced by the panels, which can be either used to reduce a rancher’s cost of operation or sold back to the electric grid at a profit. Of course, it also doesn’t include the cost of installing or maintaining the panels, which is more of a short-term expense.

But there are more in-depth metrics than just dollars earned per acre. Lambs gained about the same amount of weight at the same rate regardless of the presence of solar panels, but in late spring, the sheep in the solar-paneled pastures required significantly less water.

There are other benefits, too. Solar panels provide shade for the sheep to stand under, which reduces the need to build shade-providing structures and probably has something to do with the sheep’s reduced need for water in the study. And, of course, the area under the panels doesn’t need to be mowed or maintained in the same way that open pasture land does, and any reduction in work can be an increase in profit for a rancher or farmer.

Agrivoltaics won’t necessarily work for every agricultural situation, but it seems clear that, in this particular case, solar panels can happily—and profitably—coexist with livestock.

There seems to be an assumption made here that the solar panels are somehow linked with increased legumes in the pasture. But any pasture can be managed for increased legume percentages. And 38% less forage is a huge decrease. Rotational grazing increases the amount of forage available for grazing, but that also is a challenge with solar panels. And if a company leases farmland for the solar array, there are going to be challenges about access and maintenance of pastures.

Popular
7 Smokable Plants You Can Grow That Aren’t MarijuanaBrian Barth
Agricultural Runoff Pollutes Well Water, a ‘Public Health Crisis In the Making’Madison McVan, Investigate Midwest
Move Over, Mezcal. A Sustainable Tequila Alternative Is Taking Over.Hollie Stephens
Why Don’t We Eat Turkey Eggs?Dan Nosowitz
6 Differences Between Llamas and AlpacasAndrew Amelinckx
Explore Modern Farmer
Related
Features, Food Security, Labor
The Rise of Virtual Farmers MarketsLeah Borts-Kuperman
Environment, Labor, Water
California Farms and Farmworkers Attempt to Recover From Record FloodsNaoki Nitta
Food Security, Labor, news
A New Egg Co-operative Has Hatched in the Western U.S.Lindsay Campbell
Food Waste, Plants, Technology
New Solar Panels Allow Farmers to See the LightNaoki Nitta
wpDiscuz
We use cookies on our website to give you the most relevant experience by remembering your preferences and repeat visits. By clicking “Accept”, you consent to the use of ALL the cookies.
Cookie settings ACCEPT
Privacy & Cookies Policy