Efficiency and carbon sequestration seem to be the key. 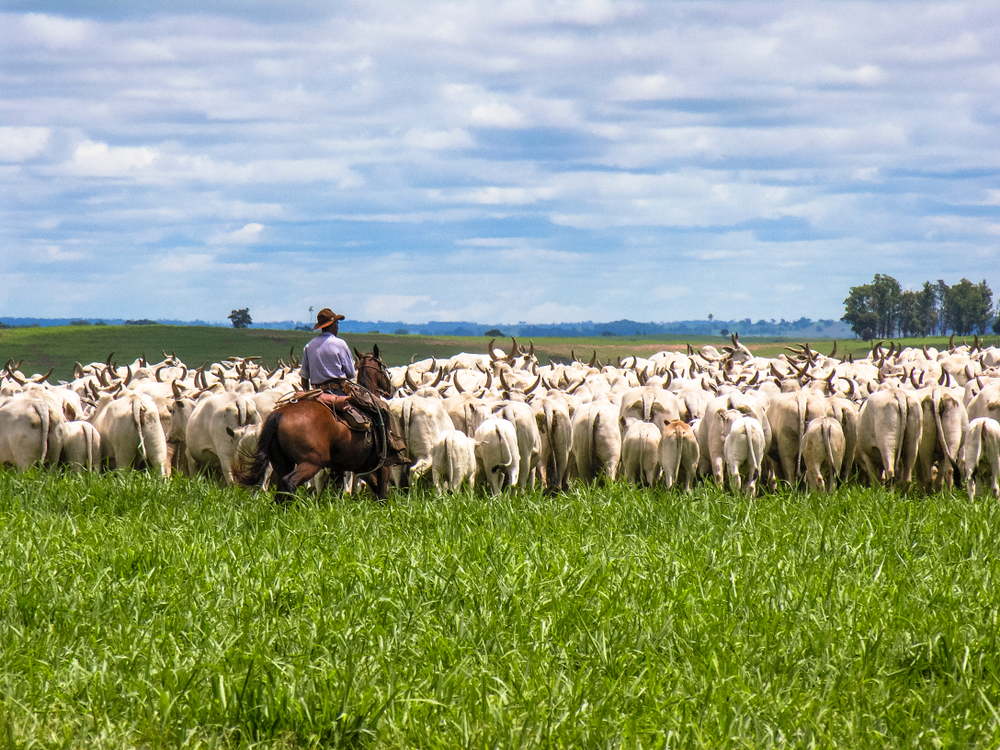 A new study has found that improved feed quality for Brazilian cattle would lead to a 20-percent reduction in greenhouse gas emissions from the beef industry in that country.
Photography by Alf Ribeiro/Shutterstock
Share
Tweet
Pin
Email

The beef industry is a significant producer of not just steaks but gases.

A new study from Colorado State University researchers analyzed 12 different strategies for reducing greenhouse gas emissions in beef operations. They found that it is absolutely possible to dramatically reduce those emissions, although eliminating them entirely is much harder to do.

To figure out exactly what works to reduce these emissions, the researchers looked across the world, compiling 292 different locations where they could compare conventional cattle ranching to some sort of greenhouse-gas-focused improved ranching. They found that exactly what’s being done, and what works, varies widely depending on location in the world: Different ranches have entirely different soil, climate, cattle breeds and vegetation, which all comes into effect when measuring these emissions.

There are a couple of different paths for reducing emissions in a beef production facility. Some try to simply make the production of beef more efficient: bigger cattle, grown faster, in order to change the ratio of how much gas is emitted to produce a pound of beef. The other strategy involves environmental change, mostly to increase the sequestration of carbon in the soil to offset the amount of gases that cattle produce.

In the United States, the researchers found that those efficiency options don’t work too well, likely because American cattle is already produced pretty efficiently. But the carbon sequestration option, which relies on essentially creating a healthier environment where the cattle are, has a very large effect around the world—the sites they found using this path had a global average of a 46-percent reduction in greenhouse gas emissions.

Those carbon sequestration strategies include adding soil amendments such as compost, integrating forested areas into the grazing lands of cattle and seeding non-forested areas with cover crops to increase the health of the soil. But the study found that many of the different strategies do work; improved feed quality in Brazil had a 20-percent reduction in emissions, efficiency strategies in Australia had an 18-percent effect and the efficiency of feedlots in the United States outstripped the carbon sequestration effects of conventional pasture feeding (although not improved pasture feeding).

The most room for change, through carbon sequestration tactics, breed changes and efficiency improvements, lie in Brazil and South America. Seeing as how Brazil is the second-largest producer of beef in the world, after the United States, that means there’s an awful lot of improvement lying on the table. It would, of course, require investment, but wouldn’t the investment be worth the cost?

Popular
7 Smokable Plants You Can Grow That Aren’t MarijuanaBrian Barth
How to (Actually) Get Rid of Fruit FliesEmily Baron Cadloff
What to Do With an Abundance of PeppersShelby Vittek
Yes, the Government Really Does Stash Billions of Pounds of Cheese in...Emily Baron Cadloff
6 Differences Between Llamas and AlpacasAndrew Amelinckx
Explore Modern Farmer
Related
Food & Drink
Food Inflation Is Eating Up Grocery BudgetsShea Swenson
Environment, Plants
Making the Case for IntercroppingShea Swenson
Animals, MTMF
Paddleboarding Goats Make a Splash on Prince Edward IslandNoah Lederman
New Census of Agriculture to Survey Internet Access, Precision Agriculture and MoreEmily Baron Cadloff
wpDiscuz
We use cookies on our website to give you the most relevant experience by remembering your preferences and repeat visits. By clicking “Accept”, you consent to the use of ALL the cookies.
Cookie settings ACCEPT
Privacy & Cookies Policy