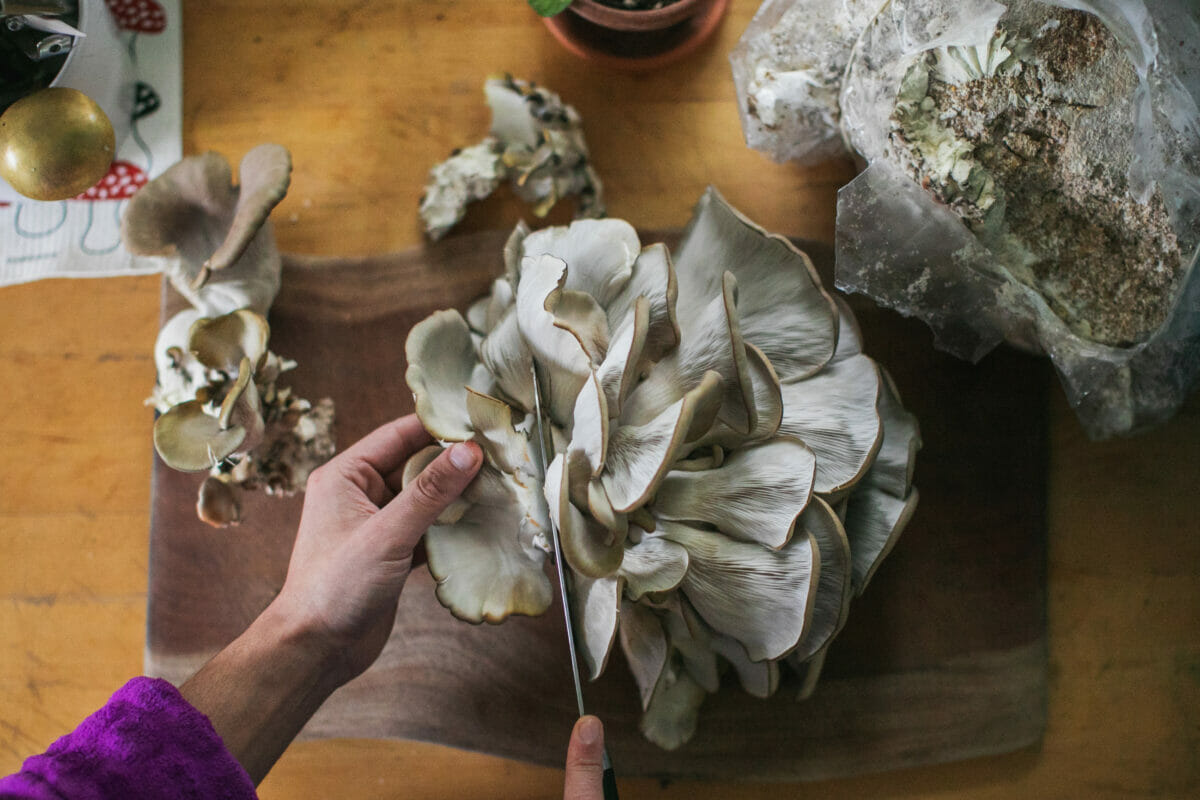 At the beginning of 2020, things were looking good for mushroom growers Sam Turner and Soraya Fernandez. The couple had launched Nearby Naturals from their rental house garage in Orlando the year before and quickly became the preferred fungi source for nearly 70 restaurants, hotels and theme parks across Florida and Georgia. They had recently moved into a larger warehouse in order to fulfill orders for Disney World, one of their biggest clients.

“Then COVID hit and we lost almost 100 percent of our business,” says Turner, who remembers worrying about what would become of their soon-to-be surplus of inoculated bags filled with spawns of lion’s mane, oyster, king trumpet, reishi and shiitake mushrooms. “Our bags were ready for the next six to twelve weeks, so there was going to be 1,200 pounds of mushrooms a week that didn’t have a home. That was scary.”

Like many companies, Nearby Naturals made a crucial pivot in the early days of the pandemic. As the restaurant and hospitality industries swiftly shut down, the company instead started targeting people seeking new activities to pass the time while confined to their homes. Unlike mushrooms, which have a short shelf life and need to be cooked and consumed within a few days of harvesting, the bags of inoculated soil are easy to package in boxes to ship. Once the mushroom kits arrive, home gardeners can harvest their first batch of mushrooms within seven to ten days, with the ability to get multiple rounds of growth out of them.

Smallhold Mushrooms, a Brooklyn-based farm, made a similar shift when New York imposed restrictions shutting down businesses last March, drying up all restaurant orders for the indeterminable future. The company started selling its substrate blocks locally. “We thought it could be fun for people during what we thought was going to be a short two-week quarantine,” says co-owner Adam DeMartino. “Now we sell them in every state.”

Now, anybody with a mailing address has access to specialty mushrooms, which they can grow in large quantities for a cheaper price than they can get them from the grocery store. (Kits range in price from $20 to $45, and they will yield up to six pounds of mushrooms.)

One year after the country’s first lockdowns were put in place, the mushroom grow kits continue to gain momentum, with photos of them taking over social media feeds—and not just because people are bored at home. Consumers are expanding their interests beyond the kinds of mushrooms found in grocery stores, and the mycology movement is rapidly cultivating new enthusiasts interested in their health benefits and sustainable cultivation (mushrooms are the ultimate recyclers, growing in waste from other sectors of the agriculture industry). 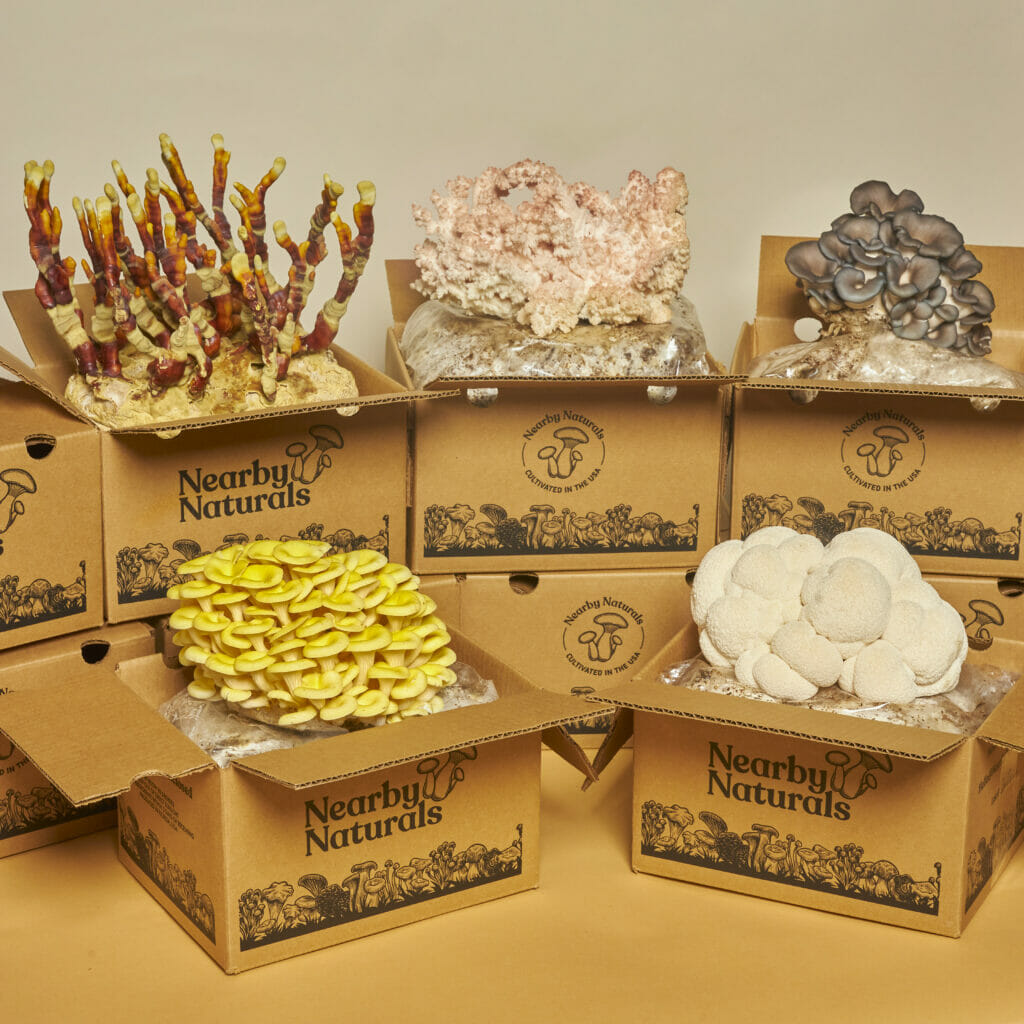 Photo courtesy of Nearby Naturals.

Specialty-mushroom farmers are riding that wave. In 2020, the global mushroom market was valued at $16.7 billion, and it is expected to reach $20.4 billion by 2025. Before the shift to selling grow kits last year, Nearby Naturals sold 1,200 pounds of mushrooms a week. Now, it’s  selling more than 2,400 pounds worth of grow kits weekly, and it is prepared to further expand.

Despite their renewed interest, at-home mushroom grow kits are not new to the market. Back to the Roots, which sells kits for growing various herbs and vegetables, launched with an oyster mushroom kit in 2009. The company is now the top seller of seeds and grow kits on Amazon, with a range of products available at major retailers including Walmart and Home Depot. Co-founder Nikhil Arora says the company aims to be “the Pixar of gardening,” approachable and entertaining for all ages. Arora has noticed “an uptick in mushroom interest,” with demand for the kits steadily rising over the last couple years.

“Sustainability and self-reliance are trending, which perfectly explains an increasing demand for mushroom grow kits,” says registered dietician and food waste advocate Erin Hendrickson. And,  according to a study published in the Journal of Positive Psychology, small, creative projects such as cooking, baking or growing food at home can increase our feelings of calm and happiness—something that’s been in short supply.

The process is indeed easy and rewarding, good for both beginners and seasoned mycologists of all ages. Small pinheads of mushrooms seem to pop out of nowhere overnight, then dramatically double in size, depending on the variety. “Anybody who has a desire, a sharp knife and some clean tap water can do it,” says Trevor Huebert, owner of the Oregon-based Bridgetown Mushrooms.

Indeed, the world of mushrooms—and grow kits—seem to have a promising future. “There are a lot more people eating mushrooms than there were before the pandemic,” says Smallhold’s DeMartino. “The trend is here to stay.”