This despite the fact that a pig’s hooves are not ideal for joystick manipulation. 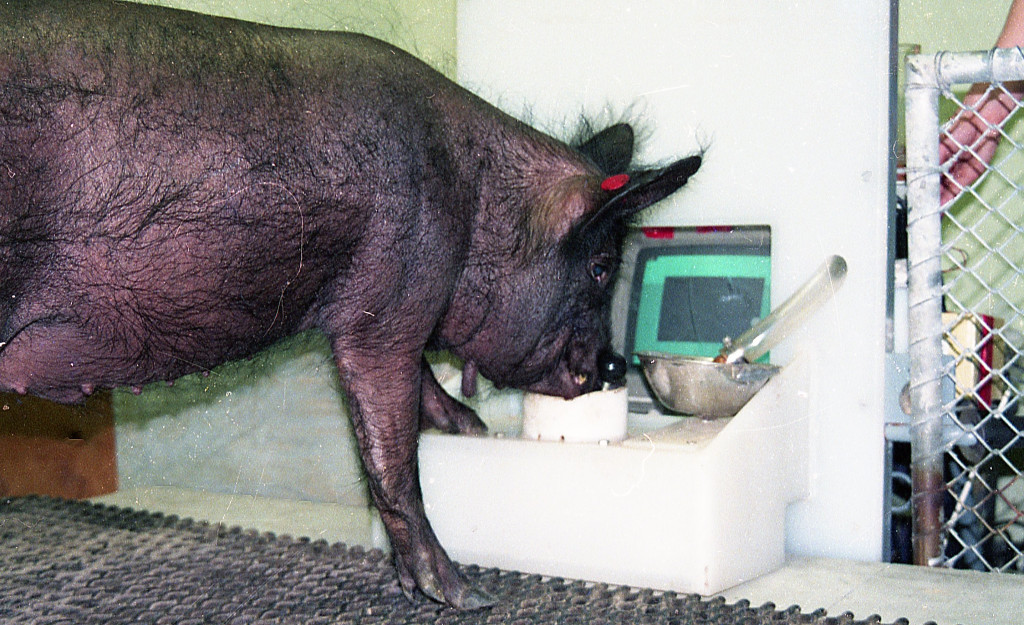 Animal intelligence, as we’ve mentioned here before, is a hugely messy concept that we still don’t fully understand.

Studies that seem to focus on animal intelligence aren’t really attempting to figure out how smart, for example, a pig named Omelet is; it’s more about understanding how an animal’s brain works, what sort of learning capability it has, rather than forming a value judgment. That said, some scientists have been working for years to get pigs to play a video game, and, well, they did it.

Pigs are generally understood to be “intelligent,” which, in this case, often means that pigs have shown the ability to complete some tasks that humans are also very good at. Researchers at Purdue University have been working for years on porcine cognition, learning about problem solving in various forms. They’ve newly published a paper in the journal Frontiers in Psychology detailing their video game experiments.

The video game in question is fairly simple: The pigs must control a cursor on-screen, using a joystick, to get that cursor to collide with an on-screen figure. If they did this, they were rewarded with a treat. This may not be a Skyrim-level game, but it requires an awful lot of conceptual leaps: They have to understand the existence of figures on a screen, that a joystick can manipulate them and then complete a task involving all of this.

Gizmodo spoke to Candace Croney, lead author of the paper, who explained that the pigs managed to do this at a level enough above raw chance that it seems clear they understand the concept of the video game. The key here is that the pigs had to learn something that has absolutely no evolutionary analogue; there’s nothing in the real world of a pig’s life that would prepare them for using a computer joystick.

The researchers further noted in the study that a joystick is far from ideal for a pig. This is another way that human-created studies often don’t do justice to an animal’s actual capabilities. In this case, the pigs in question were able to use their snouts, which really isn’t so bad; a pig’s snout is its most important sensory tool, and it is also used as a physical manipulator for light digging and burrowing. Two of the pigs couldn’t even finish the experiment; they’d grown too big for the laboratory pen. All four pigs also turned out to be farsighted, which made seeing the screen a bit of a challenge.

But even with all of the obstacles, the pigs were able to figure out this game and complete it at a high rate. Next up, we assume, is Pong.