It could also treat already-infected trees. 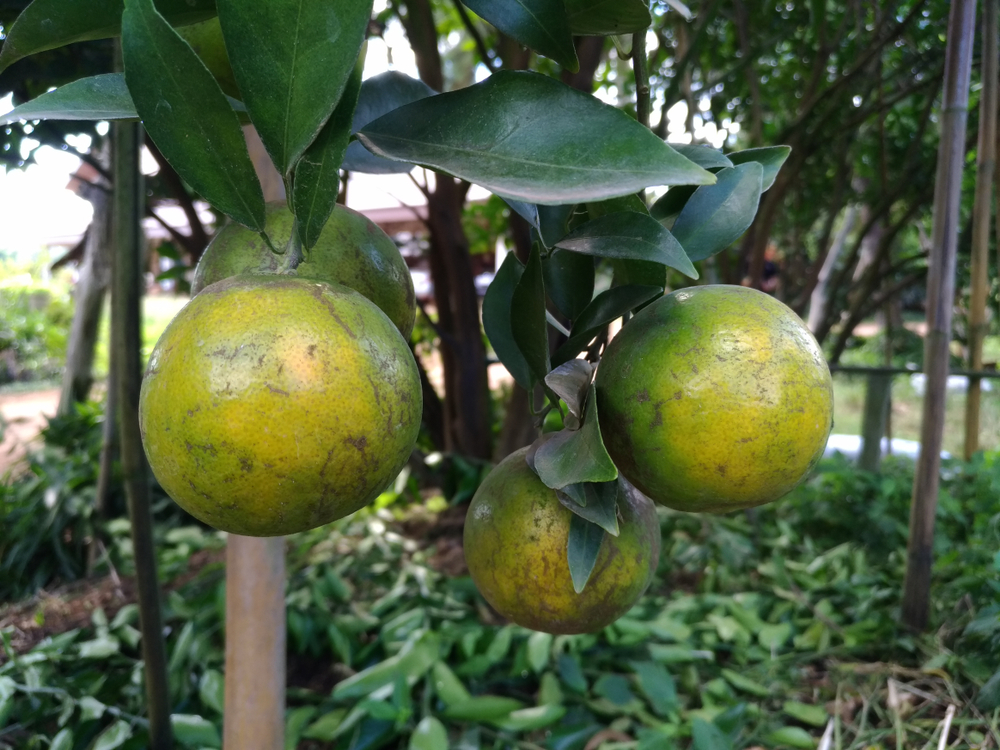 Citrus greening disease, sometimes known by its Chinese name of huanglongbing, is one of the most devastating problems to face the fruit industry in years.

According to the USDA, “Citrus Greening (Candidatus Liberibacter asiaticus) is one of the most serious citrus plant diseases in the world.” It has spread from Asia to the US, putting the entire American citrus crop, especially in Florida, at risk. But researchers at the University of California, Riverside have been working on a possible solution.

Citrus greening is a disease caused by a bacteria spread by an insect, the Asian citrus psyllid. It’s an absolutely destructive illness: Fruit produced by an infected tree is green and bitter and unsuitable for sale. Even worse, the disease kills the trees, and as yet, there is no cure. Florida orange production dropped by half in the decade since citrus greening was first detected in 2005, and it has cost the industry billions of dollars and thousands of jobs.

That may be changing, though. Back in July, UC Riverside geneticists announced that they’d discovered a possible solution. There is a peptide, a small chain that’s a bit like a smaller, less complex and less stable protein, found in the Australian finger lime—a fruit resistant to citrus greening. Finger limes are an oddball in the citrus world; related to but not in the same immediate family as the various hybrids of pomelo, mandarin and citron that create common citrus fruits such as the orange, lemon  and grapefruit. They’ve actually been getting more popular among chefs recently; their individual juice vesicles are separate, giving them a similar texture to caviar.

The geneticists at UC Riverside isolated the individual peptide responsible for giving the finger lime its resistance to citrus greening. When that peptide is injected into sick trees, their research indicates some really promising results. This new study shows that the peptide treatment kills the bacteria that causes citrus greening, and it actually triggers a citrus tree’s immune response to fight the infection better.

Treated trees survived citrus greening, even growing new shoots described as healthy. Testing indicated that trees treated with this peptide had dramatically reduced amounts of the bacteria, and one tree had no detectable bacteria whatsoever. Untreated trees, in contrast, grew sicker and eventually died.

This new study also experimented with new treatment options. In place of injection, which could be a difficult procedure for the millions of infected citrus trees, they tried a simple spray. The results were encouraging, if not universal: Seven out of 10 sprayed trees tested negative for citrus greening, and all survived.

UC Riverside has licensed its treatment to Invaio Sciences, a technology agriculture company that’s already working on injectable versions. This would be the first actual treatment for infected trees—a massive deal for the citrus industry.

So, just GE the peptide into the trees and never have the expense of spraying.

why doesn’t each county/state do aerial spraying.?

When and where will this new treatment be available to home owners?

Popular
7 Smokable Plants You Can Grow That Aren’t MarijuanaBrian Barth
How to (Actually) Get Rid of Fruit FliesEmily Baron Cadloff
What to Do With an Abundance of PeppersShelby Vittek
Yes, the Government Really Does Stash Billions of Pounds of Cheese in...Emily Baron Cadloff
6 Differences Between Llamas and AlpacasAndrew Amelinckx
Explore Modern Farmer
Related
Food & Drink
Food Inflation Is Eating Up Grocery BudgetsShea Swenson
Plants
This Seed Detective Travels the World Tracking Down Lost CropsEmily Baron Cadloff
Environment, Plants
Making the Case for IntercroppingShea Swenson
Food & Drink, Plants
In Awe of the PawpawDanny Childs
wpDiscuz
We use cookies on our website to give you the most relevant experience by remembering your preferences and repeat visits. By clicking “Accept”, you consent to the use of ALL the cookies.
Cookie settings ACCEPT
Privacy & Cookies Policy