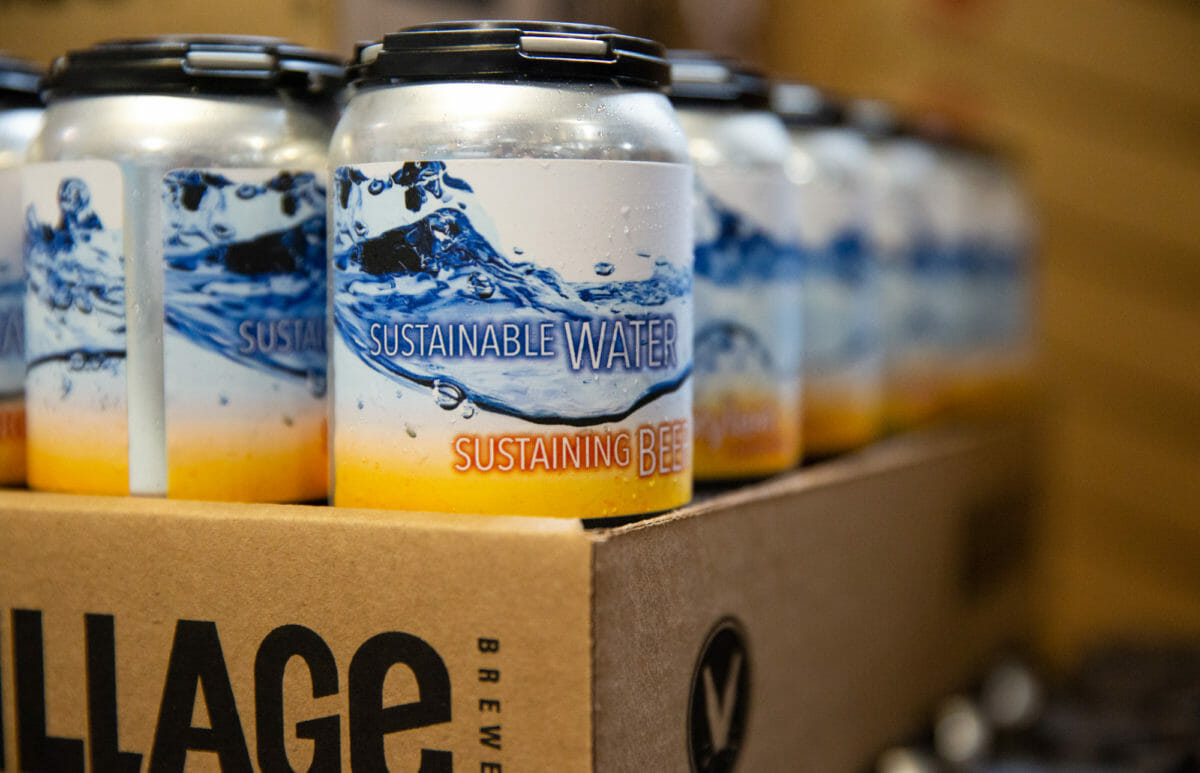 Brewing beer uses a lot of water: from the irrigation needed to grow barley and hops to the aqua that ends up in the bottle. American brewers use an average of seven gallons of water to make one gallon of beer.

This has pushed craft breweries to think about how they can reduce their water footprint to be more sustainable. One solution a handful of breweries have experimented with is using treated wastewater to make beer. That’s right. We’re talking about water that was likely once in a toilet.

A Canadian brewery called Village Brewery has become the latest to make a batch of beer using this method. The Calgary, Alberta-based brewery released a blonde ale last week using treated municipal wastewater to bring attention to the issue of water security.

“It tastes exactly like their standard product. The only difference being instead of drawing from the tap, they took water from us,” says Christine O’Grady, a program coordinator with the University of Calgary’s Advancing Canadian Wastewater Assets, which worked in partnership with Village Brewery and a water technology company called Xylem Inc. to produce the beer.

In order to make wastewater safe to brew with, it was processed by what’s known as a biological removal treatment plant. After that, O’Grady says there were additional steps involving ultrafiltration, oxidation and reverse osmosis. The water was then tested to ensure no pathogens remained, and by the end of the process, it was as clean as tap water.

Brewers say the largest barrier to more breweries using treated wastewater in their beer is that consumers are still grossed out by the idea. O’Grady calls this the “yuck factor.” She says people are grossed out by the idea of drinking reclaimed wastewater. “I think we’ve demonstrated very effectively that it’s clean and safe water, but people still have that mental hurdle to overcome,” she says.

In 2018, a group of Swedish brewers and wastewater technicians made one of the first batches of commercially sold beer using wastewater. A partnership of Nya Carnegie Brewery, IVL Swedish Environmental Research Institute and Carlsberg Sweden came together to produce a pilsner called PU:REST in order to try to get over public aversion to drinking treated wastewater more broadly (and not just in beer).

“By doing this kind of project, you can overcome the resistance [to drinking wastewater],” says Staffan Filipsson, a business developer at IVL Swedish Environmental Research Institute, an organization that works on wastewater technology. He says recycling treated wastewater could be the future not only of beer making, but also of municipal drinking water.

As water security is becoming a growing problem across the world, particularly in landlocked countries, O’Grady hopes this batch of beer will help bring greater awareness about the fact this technology exists and that we can reuse water in many ways.

“We don’t have to take away everything from the Earth. We can put some of it back,” she says.

It does make sense to do more with wastewater in places where there’s a serious water issue. But why not look towards using it for things like irrigation and other uses instead of turning it into a beverage?

I understand that the brewery and U of C want to make people more comfortable with the idea of reusing wastewater but I take issue with this article because it doesn’t mention that water reuse (especially reverse osmosis) is extremely energy intensive and expensive so by solving one problem (water security) they’re creating another (carbon emissions). It is already very costly for municipalities to treat water and wastewater, the focus should be on being less wasteful with potable water and not using potable water when its not required (such as for watering lawns, flushing toilets, etc.)

Related
The Costs and Benefits of Embracing Plant-Based MeatLindsay Campbell
Lifestyle, Plants
It’s Time For Fashion to Talk More About Regenerative AgricultureEmily Baron Cadloff
Books, Food & Drink
In Michael Twitty’s Kitchen, There’s Room to Be Your Whole SelfEmily Baron Cadloff
Animals, Environment, Plants
Farmers’ Battle Against, and Now For, MilkweedJennifer Taylor
wpDiscuz
We use cookies on our website to give you the most relevant experience by remembering your preferences and repeat visits. By clicking “Accept”, you consent to the use of ALL the cookies.
Cookie settings ACCEPT
Privacy & Cookies Policy