The Return of the Milkman - Modern Farmer
Food & Drink

The Return of the Milkman

Demand for the old delivery system has skyrocketed amid COVID-19. 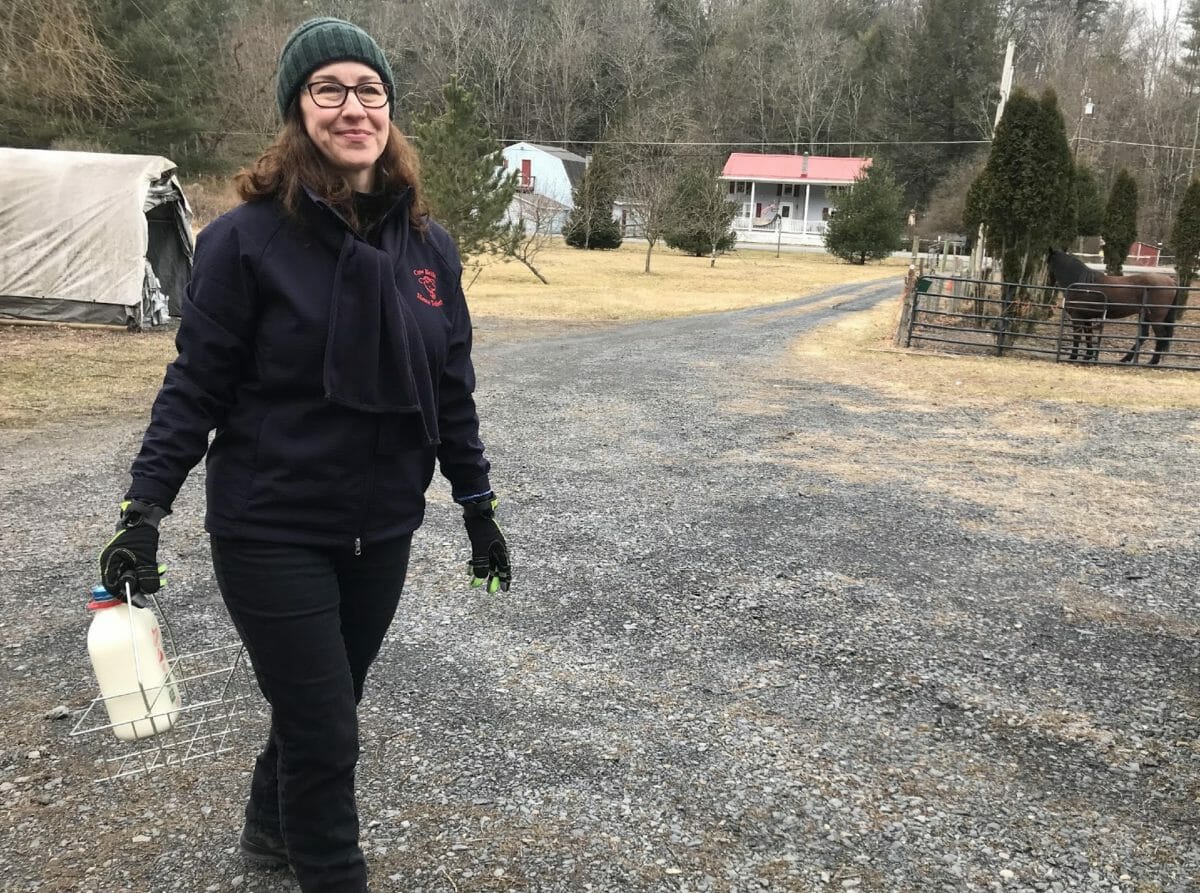 Over the years, home milk delivery has become exceedingly rare.

The milkman has been disappearing from daily life since the 1950s, when refrigerators started becoming more common in American homes. And the advent of cheap milk in grocery stores didn’t help much. But the milkman (and woman) is now making a comeback in America, as companies that deliver milk right to your door have experienced a resurgence during the pandemic.

Since stay-at-home orders were implemented in mid-March, milk delivery companies have seen demand explode. For Angie Rondolet, the founder of Cow Belle, that has meant tripling the amount of milk she delivers in a week.

Rondolet started her Pennsylvania-based milk delivery service in 2016. She hoped at the time that others might be longing for the old-school authenticity of locally produced milk, hand delivered in a glass bottle with some conversation at the door. And they have. Her business had gradually grown to the point she was making 120 deliveries each week, but things have really taken off since the pandemic hit. Her company is now delivering to 360 homes a week.

Rondolet and her husband started distributing the orders on their own for the first few weeks, but business has been so busy that they had to hire two additional employees to help out. “I was literally pulling over to nap to continue to try to get everybody delivered and to try to help out as many people as I could,” she says.

The recent demand for home delivery has brought the resurgence of the milkman (or milklady in Rondolet’s case) into American homes. Distributors providing this service have been a key link between consumers and local farmers who might otherwise be forced to dump their product with pandemic derailing traditional supply chains.

In Bridgeport, Connecticut, Douglas Wade Jr., decided to bring home delivery back when the pandemic started. His distribution company, Wade’s Dairy, stopped doing doorstep drop-offs for households in 1992. But when they started getting calls from local residents asking if they could ship them milk and groceries, Wade says they started to rethink their operations.

“After the schools shut down, COVID-19 really hits everyone’s radar,” he says. “And when those calls come in often enough, you start saying, ‘Oh, my goodness, could this be a model for our business going forward or a new avenue for selling milk?’”

The revival of home delivery has also helped Wade offset some of the lost costs he’s experienced from markets he was shipping to such as schools, restaurants and corporate cafeterias. When those closed, he says he lost about 50 percent of his business overnight. Right now, he’s been able to serve about 260 homes in his area.

Daryl Mast, a seventh generation farmer and owner of Doorstep Dairy, also never expected his business to change the way it has. Home delivery customers, he says, have tripled over a four-week span. He also has a waiting list of more than 300 people who want dairy and other homegrown products sent to them directly.

“We’re just a small mom and pop business,” he says. “We weren’t prepared for something like this.”

To stay on top of the orders he’s able to manage, Mast has also hired extra staff and has been in the process of looking for an additional driver.

The lingering question, however, that all three business owners have faced is whether or not the demand for the milkman will last. Rondolet says she’s optimistic that the customer base she’s built organically will at least remain loyal. Despite the desire to stay away from the grocery store, she believes that she’ll also maintain some of her new customers who have gained an understanding and appreciation for local farmers in their community.

“People tell me ‘the fact that you’re even out there doing this means a lot to us,’” she says. “You get hooked on the product and you love it and, you know, that’s now one less thing you need to get at the store.”

Very fond memories of the milkman in rural Illinois Mississippi River country. You got an insulated, fliptop, metal covered box for your porch. And a pad of available items, including pretty much any dairy product except ice cream. Checked off items on the pad and left the pad on top of the box. And when the top checklist was missing, you opened the box and carried your order to your kitchen icebox. By the early 1960s of course we all had refrigerators, but no one called them that – they were still iceboxes.

I have been begging for the milk man. I am 52 and we are black and lived south mpls and i will never forget our milk man….his name was Mike. Never will i forget that and how much a part of our family he was. So kind to us kids and my mom. I need that so bad in my life right now.

Oh I’ve always had a milkman but now, it’s more wonderful. I’m 71 and I’m not going to the stores. To many rude people and I work at home anyway. Thank you dairies…

Delivery is nice, but I really miss the glass bottles, when I was a child we had delivery, then there were drive through dairies that still had glass, now all you can buy (unless you can find a delivery service) is plastic bottles, you rarely even see the waxed heavy stock paper containers anymore. It just seemed to taste better in glass.

Yep, the dairy I work for serves roughly 25000 people in the Denver metro area. I wouldn’t say our business has tripled quite, maybe up 30-40% on customers and 80-90% on product. Covid 19 has done a better job than our sales team could’ve ever hoped to. Good time to be a milkman.

We are in a medium-density area, and have chosen an alternative distribution scheme.

Without high urban or suburban density, door-to-door delivery is difficult. So we arrange to meet people at a central place with their orders.

I am turning to milk delivered in glass bottles – to make yogurt. We go through a lot of yogurt, and the number of 2lb plastic tubs we’re ‘recycling’ is absurd. It’s not even clear that those tubs are actually recycled; thy might end up in landfill.

Dear dairy people: if you make a yogurt available in some kind of recyclable container (even 5lbs would be fine) we’ll at least try it. We love the Brown Cow cream-top plain.

Delivered milk is the real deal. Healthier with enzymes still in the milk. The cream separates and is on top. The grocers milk is like watered down, sugar added. Clover fed cows milk is so much more delicious.

When I was a little boy of ten years old I use to wake up every morning at 3am sharp to watch the milk man deliver milk to my next door neighbor. I thought that was the most exciting thing in the world to be up very early in the morning and quietly delivering milk to peoples homes. I even dreamed of being a boy that ran to and from the milk truck to place the milk in the container on the porch. A few years later l got an early morning paper and at last there l was delivering… Read more »