The restaurant and education center is set to open in Minneapolis. 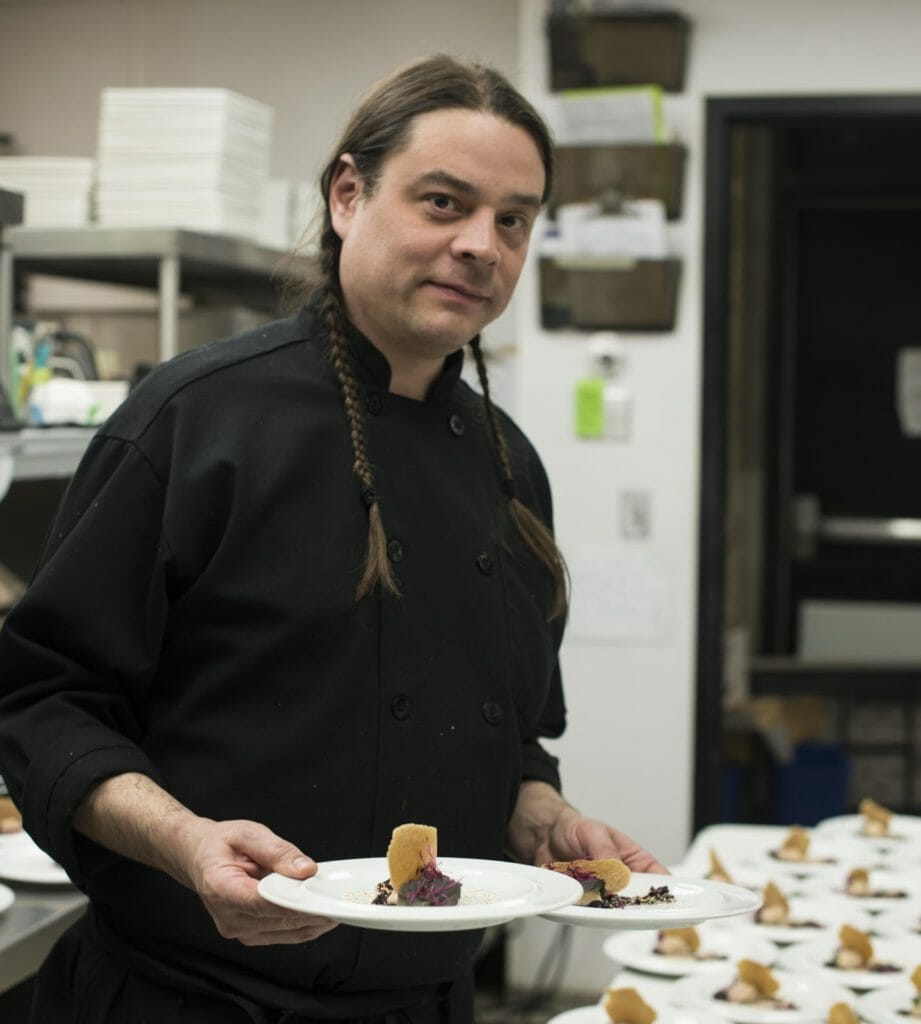 Sean Sherman sees a lot of oppression when he thinks about the world that Indigenous people live in. The Oglala Lakota chef, who is based in Minneapolis, Minnesota, has spent many years trying to change that with food.

In 2014, Sherman started the Sioux Chef, an Indigenous catering and education business, but noticed quickly that there was a greater need to help heal his community from the effects of colonization by reconnecting them with the original food of his ancestors.

“There’s so much knowledge that was lost… There’s this complete absence of Indigenous anything within the culinary world,” he says. “It’s a completely broken system.”

Sherman and his partner Dana Thompson plan to open what they say will be the very first Indigenous Food Lab in Minnesota over the next few months. The space will include a restaurant, a training kitchen and education center. The lab will be part of their nonprofit organization, North American Traditional Indigenous Food Systems (NATIFS), and aims to be a hub for Indigenous food education.

Sherman hopes the lab and others like it will allow Indigenous people to reclaim cultural food traditions that have been absent for multiple generations. Sherman and his team plan to invite Indigenous communities from across North America to come  to the food lab to learn and to share knowledge about their regional food systems. This could consist of anything from agriculture practices like seed saving and ethnobotany to learning how to cook and preserving the flavors of their area. “There’s this huge knowledge base that we should be tapping into to make a better world for everyone,” Sherman says.

The kitchen and education center will seek to inspire Indigenous people to start their own restaurants and farms in their communities.

The lab’s restaurant, which will eventually open to the public depending on pandemic restrictions, will serve pre-colonial food. This means no dairy, wheat flours, refined sugar, beef, pork or chicken. These are foods Sherman notes were pushed on Indigenous populations. Instead, expect options like cedar-braised bison with maple roasted squash or savory wild rice cake with forest mushrooms and pesto. Traditional ingredients will also be available to those learning in the training kitchen and will be sourced from local Indigenous farmers and foragers.

Sherman believes that working with these foods and introducing them into communities beyond Minneapolis will not only fill a knowledge gap, but help address food access and chronic dietary health issues. Currently, rates of diabetes for Indigenous people are the highest within any other racialized group in the US. Rates of heart disease are roughly 50 percent higher compared to white people and more than one-third of the Indigenous population’s cardiovascular disease related deaths occur before age 65. Indigenous families are also 400 percent more likely than other US households of not having enough to eat, according to a report from the Partnership with Native Americans. It attributed this largely as a result of living in remote, isolated locations like reserves, where food supplies and jobs are scarce.

Sherman says the pandemic has slowed down the lab’s opening, and he is waiting for details regarding a lease for a building to house it. He says the pandemic has required his team to think about how it might have to adapt until certain restrictions are lifted. They plan on starting with small groups for training and will create a number of publicly accessible materials for education like podcasts and videos that will be found on their website and social media channels.

Once they’re able to get their operations up and running, he wants to launch several food labs in locations throughout North America. This will increase accessibility to food knowledge, he says, and fuel change on a larger scale.

YES! He’s doing such amazing work in this world – thanks so much for sharing!!

Save some seeds for me!

“pre-colonial food.” this sounds so interesting, and so important! best of luck to Sherman and his team.