Are the Famed Easter Island Statues All About Farming? - Modern Farmer
Plants

Are the Famed Easter Island Statues All About Farming?

New research suggests an agricultural explanation for the mysterious statues. 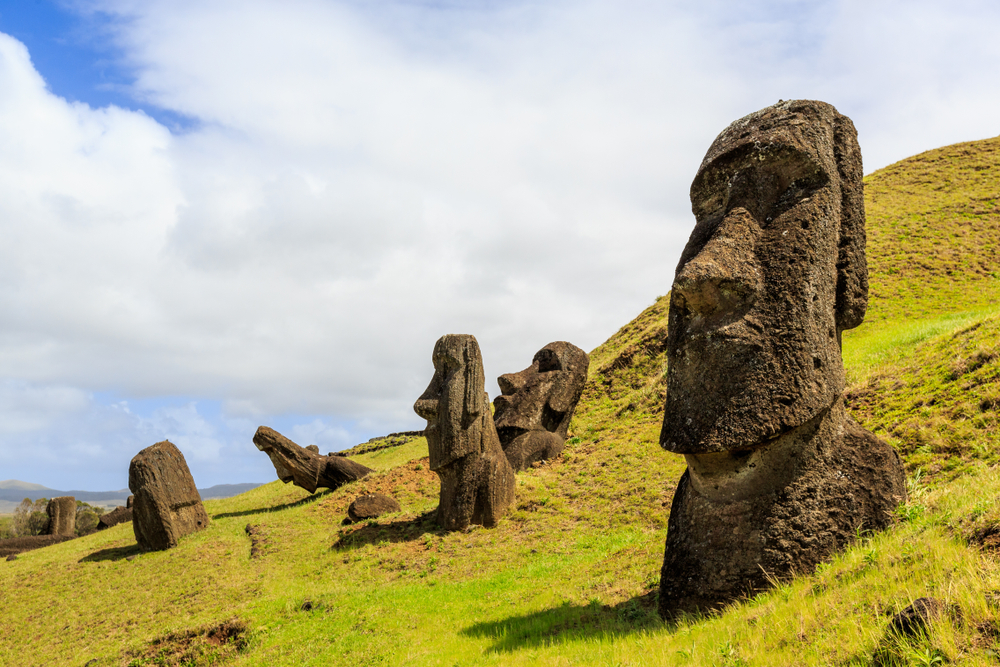 The moai are undoubtedly the most well-known feature of Easter Island, sometimes called by its original name, Rapa Nui.

Moai are the giant stone sculptures scattered across the island, sometimes referred to as “heads,” though they are actually full-body statues. (Some of them were buried up to their necks, and the heads are disproportionately large.) These have been a subject of fascination for researchers for generations, as information about how they were built, moved, and what they represent is scarce. A new theory suggests something fascinating: these statues are all about farming.

Standing as high as 30 feet tall and weighing as much as 90 tons, the moai are incredible feats of sculpture. Research over the years has been unable to conclude exactly how items this big and heavy were moved from the quarry where their rock was drawn; scientists sometimes construct their own and attempt to move them, with varying results.

The vast majority of the island’s moai are found at the site of the Rano Raraku quarry; it’s sometimes believed that the statues there were simply awaiting their move to some other part of the island. But new research indicates that they might have been placed there permanently, designed to help usher in productive farmland.

Some time before European contact (it’s not agreed exactly when), the formerly densely forested island was cleared. This may have been done to get logs for the movement of moai, or, you know, maybe not. Nobody’s all that sure about anything on Easter Island, because European landings and slave raids essentially erased all known history there. Today there is sparse tree growth, and the lack of trees produced a soil prone to erosion and largely unsuitable for agriculture. Without large plants, soil quality degrades; it has trouble holding onto water and nutrients, and that makes it not very good for agriculture.

New research, led by Jo Anne Van Tillburg, an archaeologist and head of the Easter Island Statue Project, tested the soil around the quarry and found something curious: it was…great. Analysis showed that the soil was high in nutrients crops need, including calcium and phosphorous, and there was evidence that multiple crops, including banana, taro, and sweet potato, had been grown there.

The type of stone used to craft the moai is a volcanic rock called tuff, and past research has indicated that it can actually help agriculture by acting as a compost material. In other words, the researchers think that the quarrying and sculpting process of creating moai may actually have produced the best, most fertile soil on the island, which was then smartly used to grow several kinds of crops. There’s also quite a bit of fresh water around the quarry.

So the researchers theorize that it’s possible the moai were agricultural sculptures, protecting the land and creating fertile soil, while at the same time their creation actually produced fertile soil. None of this is proven, of course, and may never be, but it’s certainly a fascinating possibility.

So it wasn’t indigenous stupidity but greed and violence of white “explorers”.
What a shock

Related
Farmers and Ranchers Squeezed By Rising Fuel CostsEmily Baron Cadloff
Plants
How a Desert Town Is Growing Its Way to Better HealthElizabeth Bellizzi
Animals
Mormon Crickets Swarm Oregon FarmsShea Swenson
Personal Essay, Plants
I Failed at Growing Food for Humans, So I Grew It for...Lela Nargi
wpDiscuz
We use cookies on our website to give you the most relevant experience by remembering your preferences and repeat visits. By clicking “Accept”, you consent to the use of ALL the cookies.
Cookie settings ACCEPT
Privacy & Cookies Policy