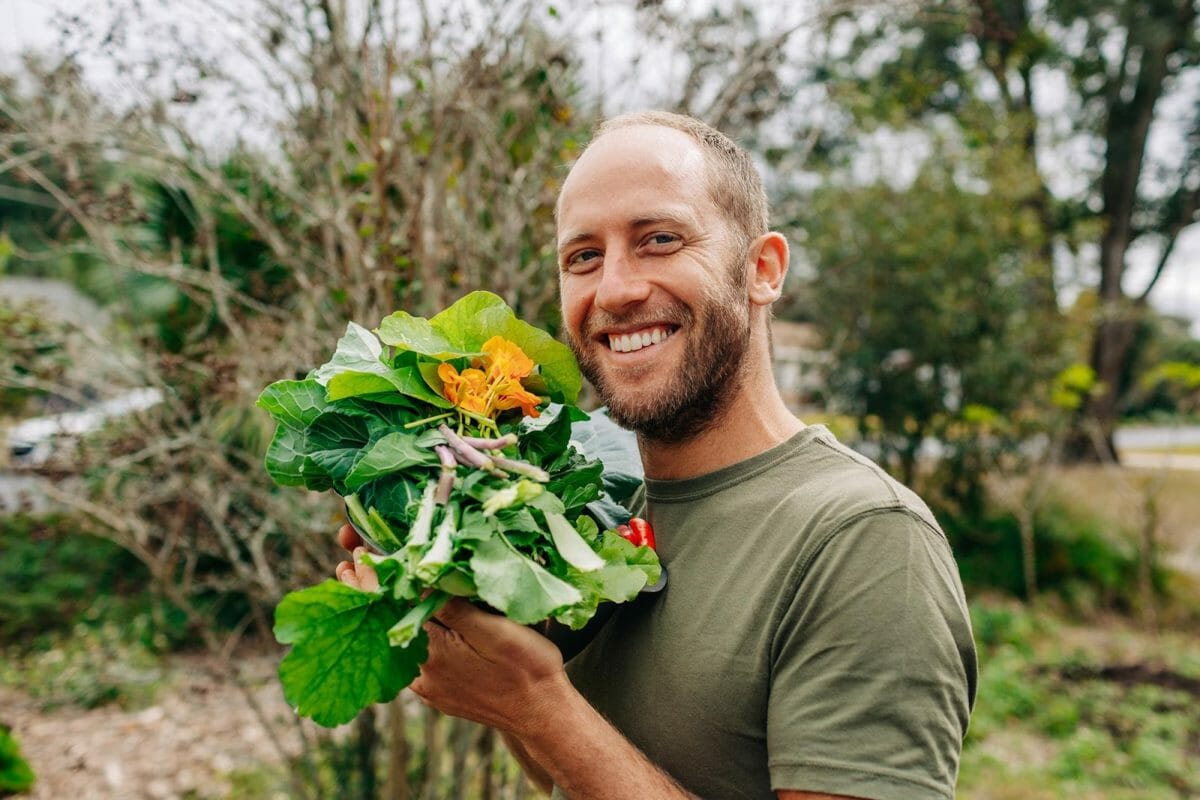 Eight years ago, Rob Greenfield was struck by the reality that all the food he was eating contributed to the profits of large-scale industrial agriculture.

“I woke up to our food system,” he says. “Every bite of food that I was taking was causing destruction to the world.”

Greenfield says that, for many years, he bought the cheapest food he could find at big-box grocery stores and wasn’t thinking about what he was putting into his body. He used to own his own marketing firm and had plans to be a millionaire by the age of 30. He only thought about food in terms of its price.

But, eventually, Greenfield says a number of films and books he consumed about the food system began to weigh on him. And he decided to make some changes in his life.

Last year, he stepped away from the traditional food system and became entirely self-sufficient. He wanted to answer a lingering question: Can you grow and forage 100 percent of your own food? Starting in November, 2018, he did just that for a whole year.

He decided to live in Orlando, Florida, during that year—because of the area’s long growing season—in a 100-square-foot house, located in his friend’s backyard. Greenfield  grew his food on neighbors’ front yards and let them eat whatever produce they wanted. He thought this would help restore a connection to food he believes has been lost.

“Food has been made and turned into a commodity, and it just turns into dollars and cents on a spreadsheet instead of the life-giving substance that it already is,” he says.

Greenfield says his daily workload during that year varied, but he would typically spend 40 to 80 hours a week foraging or growing food. He sought the help of local farmers, gardeners and food foragers to learn what grew best in each season.

He also decided to take his project a step farther than providing fresh produce for himself and his neighbors by launching a program called Gardens for the People. The project built gardens for low-income homes in Orlando and Central Florida, whose occupants otherwise wouldn’t be able to afford fresh food. He also started The Free Seed Project that has sent out 5,000 free seed packs to help people across the country grow their own organic gardens.

In Orlando, he planted more than 200 community fruit trees that are publicly available for anyone to take from and taught free gardening classes to teach people how to grow their own food.

He says that while the experience of growing and foraging his own food was challenging, he wants others to know it’s possible to become completely self-sufficient. “I felt happier; I feel happier and healthier than when I started,” he says. “To me, in itself (it) is pretty beautiful proof that I didn’t just survive—I felt that I thrived.”

The next stage in his food journey is already under way. This week, he set off on a year-and-a-half-long trip around the world. Greenfield says he’ll be speaking to people about his experiences and visiting places that are providing solutions to food system problems. Even though he’ll be hopping from location to location, Greenfield says he’ll continue to source his food locally, wherever he might be.

My father and grandfather were farmers. We learned to grow our own meat and process it. To can, dry or freeze it. We learned to grow enough vegetables to feed our family and most of the neighborhood. He did this because during the depression he knew family members, children and neighbors that literally starved to death. He taught me to save seeds, and to sprout them and grow them out. To companion plant. As a younger person I did not realize the importance these skills would be. I will always be self sufficient – no matter where I go. The… Read more »

Hope to join ur program from far away Ghana West Africa. I’m really thrilled by ur self encouragement. I have learned lot of tips from ur in-depth experience in the shift process of our earthly life in the food system. Thanks

“Foraging 40-80 hours per week” -what is foraging? Did he eat any meat? No family to support? A nice feel good story but not applicable to the majority of us.

When did you have time to cook?

Seems a bit far fetched, the bit about foraging for long hours. Perhaps not sustainable for the long term.

Smith, Susan, Rawat. the point of this whole thing was NEVER to have other people live this way, and once he was so depleted by the hard work he ate a deer that was road kill whereas he lost a lot of his social media followers (article in Orlando Sentinel.) The point of this lifestyle is to have more of a connection to one’s food, to help grow it or to fish (and if you have the tools to hunt for it) so not to have everything processed and packaged.) Unless you are a farmer who can grow your own… Read more »

Popular
7 Smokable Plants You Can Grow That Aren’t MarijuanaBrian Barth
Alaskan Salmon Face a Stream of New MinesBecki Robins
Why Don’t We Eat Turkey Eggs?Dan Nosowitz
Holey Cow: The Wonderful World of a Fistulated CowAnna O†™Brien
6 Differences Between Llamas and AlpacasAndrew Amelinckx
Explore Modern Farmer
Related
news
The Fertilizer Shortage Will Persist in 2023Shea Swenson
Environment, Food & Drink
Where Has All the Mustard Gone?Chloe Faure
Animals, MTMF
Meet the Maine Teenager-Turned-Landscaper Thanks to Grazing GoatsBridget Shirvell
Animals, Food & Drink, Lifestyle
The Great (Sticker Shock) ThanksgivingLindsay Campbell
wpDiscuz
We use cookies on our website to give you the most relevant experience by remembering your preferences and repeat visits. By clicking “Accept”, you consent to the use of ALL the cookies.
Cookie settings ACCEPT
Privacy & Cookies Policy