But researchers say more information is needed to truly grasp the current state of food systems. 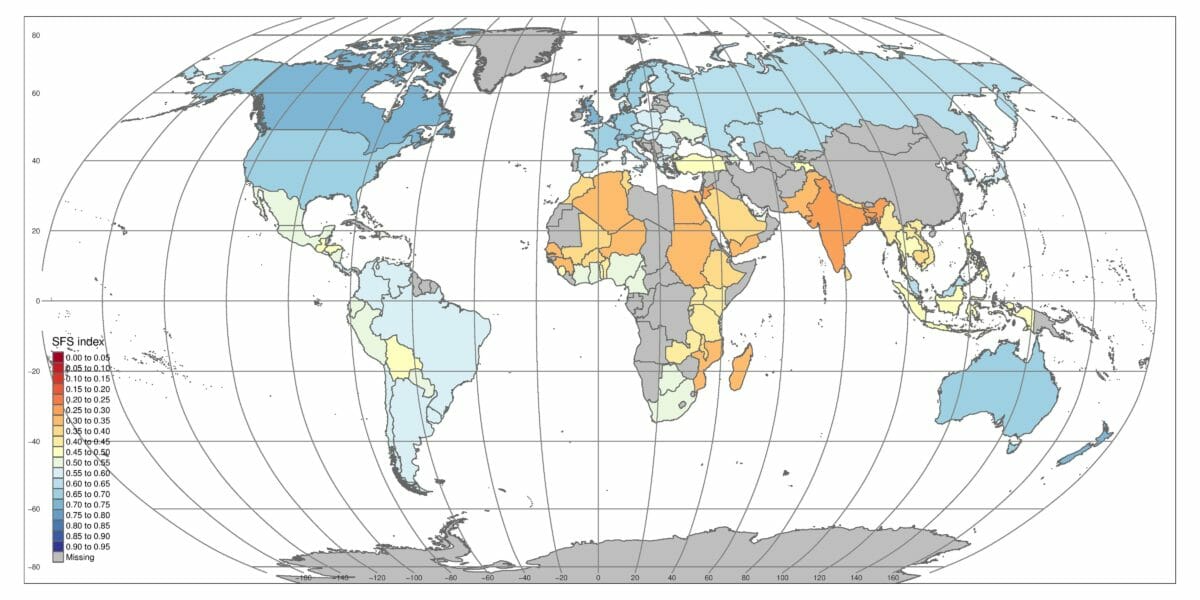 Researchers have created a map that grades the sustainability of food systems around the world, but they say it highlights how little we really know about how we feed the world’s population.

The map, built by the International Centre for Tropical Agriculture, looks to show the sustainability of food systems on a country-by-country basis. In order to do this, researchers analyzed 20 different indicators in 97 countries, using two decades worth of scientific literature about food systems. But researchers say the map is incomplete, as they need more information to truly grasp the state of food systems.

Their final product, published in the journal Scientific Data, is the first attempt to include an analysis that not only uses traditional indicators associated with the environment, food and nutrition but also includes economic and social dimensions such as food price volatility, available food and access to electricity.

“The food system is probably the largest employer in the world, so the sustainability of food systems is also about the economic and social contributions of those hundreds of thousands of people and enterprises that are involved in some aspect of the system—from production all the way to food retail and distribution and consumption,” said Christophe Béné, a lead author of the study. “Economic and social dimensions of food system sustainability cannot be ignored.”

Researchers note that understanding sustainability in food systems is critical to preparing the world for food security challenges that will come out of climate change and the planet’s rising population. They believe that the map potentially will be able to help guide policy on global food systems, but current knowledge gaps will need to be filled.

For example, they initially found 192 different indicators that could be used to measure food systems sustainability, but many were not comparable across all countries. Béné said this is because both high- and low-income countries are collecting only a small portion of information in their national statistics in comparison to what is needed to show a comprehensive analysis on sustainability of food systems.

While this is a big problem, researchers say the map at least establishes a framework that can be built on.

Popular
The Rise of At-Home Hydroponic GardensBridget Shirvell
How to (Actually) Get Rid of Fruit FliesEmily Baron Cadloff
7 Smokable Plants You Can Grow That Aren’t MarijuanaBrian Barth
5 Rare Plants That Are Surprisingly Easy to Care ForEmily Baron Cadloff
Debunking the Geep: How Many Sheep-Goat Hybrids Are Real?Jesse Hirsch
Explore Modern Farmer
Related
Environment, Politics
USDA Accepts More Than 2.5 Million Acres in Grassland Conservation ProgramDan Nosowitz
Environment
How Has Hurricane Ida Affected Agriculture and Food?Dan Nosowitz
Labor, Politics
USDA Announces Aid for Farm and Food WorkersDan Nosowitz
Food & Drink, Lifestyle
The Companies Specializing in Farm-to-Door Delivery ServiceShea Swenson
wpDiscuz
We use cookies on our website to give you the most relevant experience by remembering your preferences and repeat visits. By clicking “Accept”, you consent to the use of ALL the cookies.
Cookie settings ACCEPT
Privacy & Cookies Policy