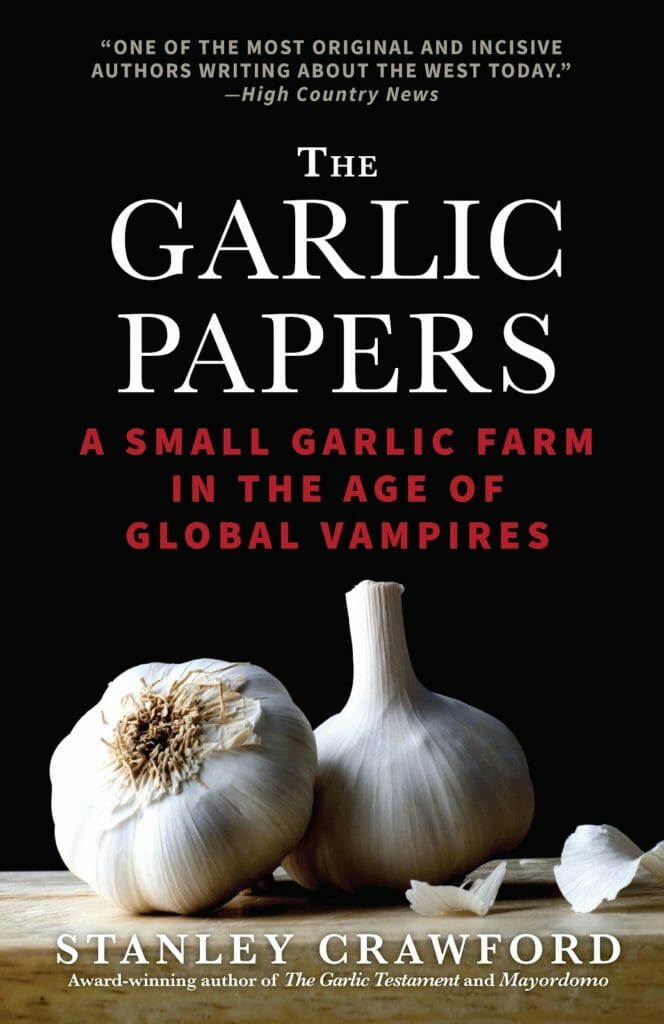 Most small farmers might run away or settle when locked in a legal battle with a much larger corporate competitor, but not Stanley Crawford.

In 2014, the New Mexico garlic farmer filed a petition with the US Department of Commerce asking it to review the trade practices of Harmoni International Spice, the American branch of a large Chinese garlic producer and importer. He argued that the corporation was flooding the American market with cheap garlic through an anti-dumping loophole, undercutting small farms like his.

In Crawford’s new book, Garlic Papers: A Small Garlic Farm In The Age Of Global Vampires, the farmer chronicles his attempt to challenge the corporation and its team of international lawyers.

The book also offers tips and tricks Crawford has learned since he started producing garlic with his wife in the 1970s. He says he tried to intertwine personal anecdotes of life on a local farm with his legal saga. Maybe most importantly, Crawford hopes those who read the book will realize the importance of buying from small local farmers.

“Farming is cattle intensive, labour intensive, and to get a reasonable price for one’s product is extremely important; otherwise, you’re basically a charity serving the public good food,” he says.

After Crawford filed his complaint, Harmoni filed a lawsuit against the farmer, his lawyer and other defendants under the Racketeer Influenced and Corrupt Organizations Act. The claim said the defendants were conspiring to take down the garlic producer. Harmoni claimed Crawford and other farmers had been recruited by Chinese rivals to file baseless complaints against the company.

Crawford disputes this. He says it was international trade lawyer Ted Hume  who convinced him to take up the review request when he visited his farm and told him about how Harmoni was “able to game the system.” The farmer says his hope was to see the price of imported Chinese garlic rise to a level closer to what US producers need to charge.

Crawford says the garlic conglomerate only sued him and the other defendants as an attempt to scare them.

In 2017, the Department of Commerce dismissed Crawford’s complaint, citing “inconsistencies” in his request.  However, Crawford says he is contesting that ruling in court. Harmoni eventually dropped its racketeering claim, but lawyers representing the company say they did so to avoid further court costs.

Crawford says he has no regrets about his decision to take on Harmoni.

“Our legal system is really a bit of a mess that allows a large corporation to go after a small producer,” he says, adding that he doesn’t take what he’s been through personally.

The big producers should have to pay the small farms legal fees.

Readers should know that Stanley Crawford’s new book, The Garlic Papers, is a work of personal fiction by Crawford and in no way is an accurate journalistic representation of what actually happened at the Department of Commerce. Stan Crawford has accepted cash and expensive equipment, both directly and indirectly, from Chinese businessmen Jack Bai and Wang Ruopeng, who are trying to gain an upper hand for their Chinese garlic companies in the American garlic market. Bai and his companies are direct competitors and long-time enemies of Harmoni, the company Crawford and his attorney Ted Hume are trying to take down.… Read more »