Earthworms are usually considered a good thing for farmers and gardeners. 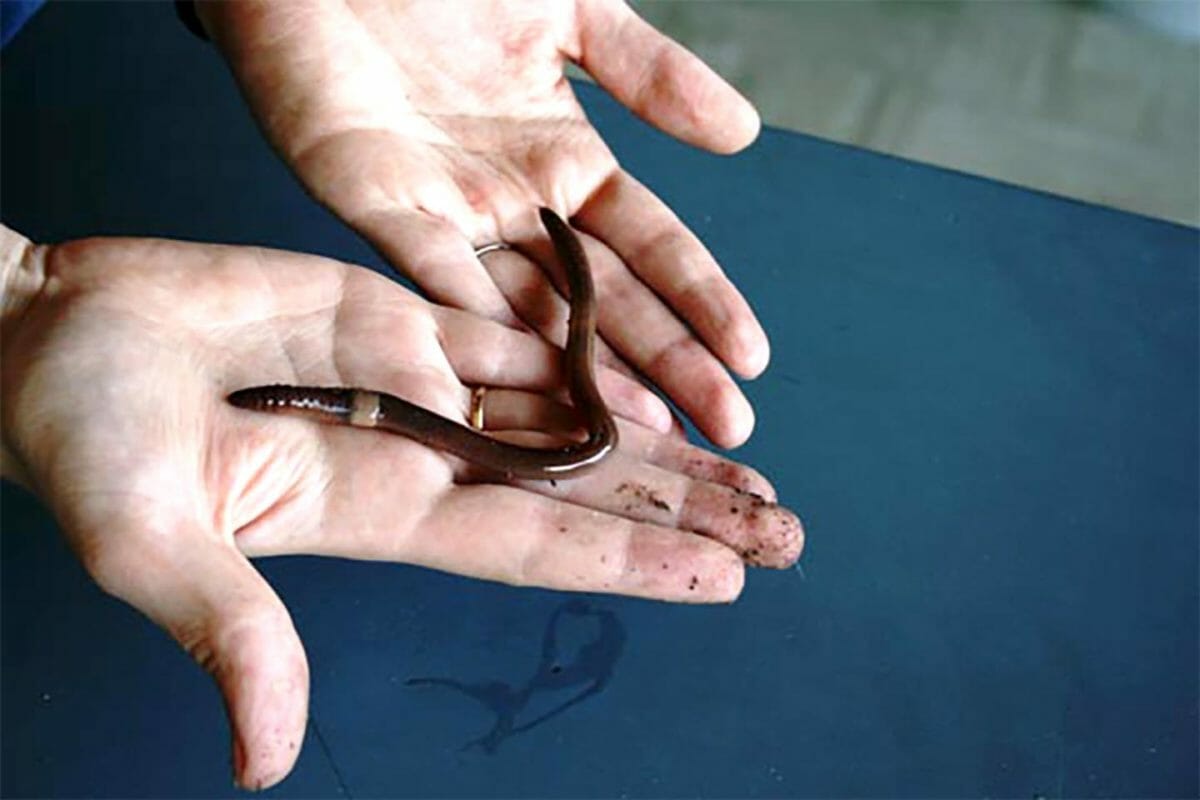 They break down organic matter into valuable compost, they aerate the soil, they provide valuable nutrients. Worms are great! But, it turns out, that doesn’t apply to all worms. Meet the Asian jumping worm.

Most earthworms are not native to the great growing regions of the United States and Canada; settlers brought earthworms with them from other countries, and the most important worm species for farmers and gardeners are from Europe. The Asian jumping worm—the name, confusingly, refers to a number of fairly similar species of worm—originated in Japan and Korea, and probably came over to North America sometime in the 19th century. But it’s only become common in large numbers in the past decade, having first been found in Wisconsin in 2013.

The various species of Asian jumping worm are a dark grey-brown color, and not slimy like other earthworms. Their name comes from their behavior; when disturbed, they wriggle violently in a snake-like motion, sometimes even leaping into the air or detaching their tails to try to escape. They also tend to bunch up, which means that if you see one, chances are there are a lot more nearby.

Unlike other worms, Asian jumping worms can reproduce without mating, and though they die each winter, they leave behind lots of cocoons, which look like little black seeds and are commonly moved, undetected, in soil and compost. Those cocoons hatch in the warmth of spring, maybe somewhere new.

But the big reason these worms are a concern is that they don’t really burrow the way other earthworms do. Instead, they stay on the surface, often in leaf piles. They also grow more quickly, reproduce more rapidly, and consume more plant matter than other worms. The result of an Asian jumping worm infestation is the soil transforming into a field of soft dry soil pellets, sort of like ground coffee.

By attacking the surface of the soil, they make for an inhospitable environment for insects and plants alike. Soil hit by Asian jumping worms is nutrient-rich, sure, but it’s all on the surface, and is easily washed away by rain, almost like fertilizer. It’s not a sustainable way to keep the soil rich and healthy. And the rapidly vanishing leaf cover makes an environment that’s bad for slow-growing plants like trees, and good for weeds. Researchers find that they’re also out-competing the European earthworms in some way—they’re not quite sure how, yet—and that’s bad for the soil, too.

Here’s the worst part: there’s no solution at all. Recommendations are pretty much solely for prevention, and some of the instructions are hard to follow, like diligently cleaning any soil from boots or cars, or inspecting any new soil to make sure it’s free of cocoons (which, again, are tiny and basically just look like soil). Research is moving forward to find a solution—but one isn’t here yet.

Last year when we were removing deep bedding from goats yard (wintering depth). we noticed these HUGH worms.. We have NEVER seen worms this size.. So this year, i have chickens, Hoping if what we have are actual jumping worms. my chickens will get fat and my compost piles will be free.. It was crazy how many were in this bedding! compost yard.

I’ve been controlling the spread and interrupting the life cycle of jumping worms around my rock patio, flower garden and border of my yard with a mix of 1/2 water and 1/2 white vinegar. It is crazy to watch them erupt out of the ground when this mix is poured over the dirt. The acid in the vinegar must burn them and they are dead within 5 minutes. I then use a hose to dilute the vinegar. I know you have to be careful around some plants but this is the only method I have found that kills the worms… Read more »

Just out of curiosity, if I got some fire ants and grew them where these worms are, would that solve the problem?

Are the cocoons soft that look like dirt. How far down do the worms lay their eggs? Why can’t the affected land be dug up. And put on a steel surface. And have a heavy drum like the one use for packing the tar on the streets. Rolled over it, it won’t hurt the dirt but it may kill the eggs. I know it’s time consuming. And it depends on how durable the cocoons are. But if it get rid of the worms it’s worth it. And no harmful chemicals. Just a thought 🤔💭 I know it may sound silly.… Read more »

The Asian jumping worn is now in northeast Pennsylvania. I planted new grass which came in beautifully. Over the last month noticed many brown piles of the surface and the grass began thinning and ultimately dying. Tried saving it with soul building fertilizer and liquid 7. Nothing seems to work.

Three years ago I noticed a long snakelike worm shooting out from under a small rug that I had put down in my garden with wood chips over the top. As it was wiggley I thought it might be good for fishing. No fish would bite on it. No birds will eat them and after having a representative from Cornell University come and look I found out they were the Asian Jumping worm. I had my soil tested and it has low nitrates but, the rest is good. Can’t share any plants as I’m aware of spreading them. Horrible.