This “The Final Table” Chef is Doing Something Amazing with Fish - Modern Farmer
Food & Drink, Lifestyle

This “The Final Table” Chef is Doing Something Amazing with Fish

If you’re looking for something to binge on during the holidays, watch a dozen teams of global top chefs work their culinary magic.

I recently ducked into an unassuming worn-wood strip of a restaurant where I ate a table full of Japanese izaykaya such as quivering Hokkaido scallops sauced with yuzu, koshu and nuoc cham, matchless nigiri, and super-crunchy chicken skin chips topped with nitsume, scallions, mayo and bonito. I probably ate a dozen dishes or more, all of them complex, nuanced and fanciful. Chef Darren MacLean and his small brigade created these plates at Shokunin, in a tiny open kitchen in downtown Calgary.

After tasting his food, the first surprise was realizing the chef is a white guy from landlocked Alberta. The second surprise came when learning that this relatively unknown chef – even by Canadian standards – was invited to compete on Netflix’s “The Final Table”. And the third surprise (spoiler alert) was that he makes it to the finals.

After tasting his food I just had to sit down with Darren MacLean to find out if he’s got more surprises up his sleeve. It turns out, he does. A new restaurant on the way, and a fish-aging program. 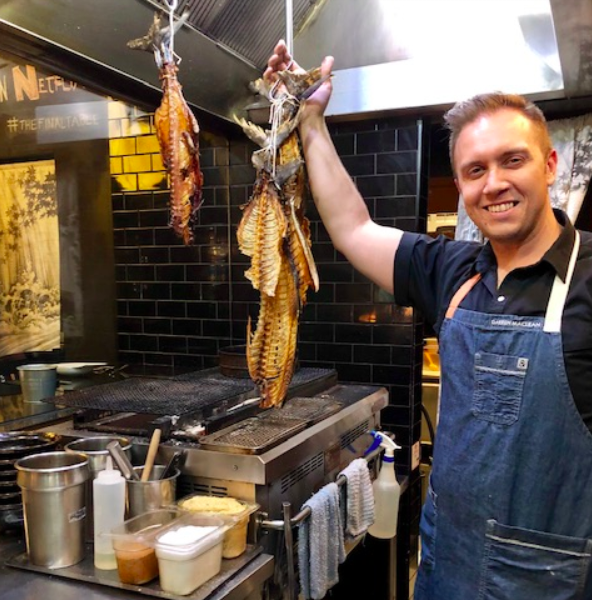 Chef Darren MacLean at his Calgary restaurant with an aged fish.

“We age fish,” says MacLean. “We butcher them and keep them on the bone, heads off, guts out, and we scale them but leave the skins intact. Then we vacuum-seal them and keep them in the fridge in really cold ice water — we constantly change the ice so that it ages at almost one degree for four-to-five days. It breaks it down and gives it a wonderful texture.”

At his restaurant I discovered it’s especially great for nigiri. You know how sometimes you can have a bite of sushi and it almost snaps? Too rigid, with an off-putting chew. At Shokunin, they kill the fish by running a wire through the spines so the fish don’t go through rigor mortis. “With the aging it allows the fish to go through a bit of necessary decomp in order to bring out the sweetness of the flesh,” explains MacLean.

The chef traveled through Japan for eight months before opening Shokunin several years ago. He also visited Japan in his early twenties and every year thereafter four or five times a year to solidify his knowledge and to learn new techniques. He says that Google is also a hell of a thing.

“We’re also developing a dry-age fish program for larger hiramasa [Japanese yellowtail].” It’s a process by which you remove the scales and keep the skin intact. The skin ages in a static environment at about one degree. “You can’t have air circulating,” says MacLean. “You basically build a fridge within a fridge.” He says you hang the fish and the skin tightens up. The fish develops and begins to age, not unlike a piece of red meat. “In Japan I had a 14-day aged tuna belly,” he says. “It tasted like a medium rare steak.”

Great article on the fish preservation. I work with coastal native Americans teaching traditional diet. Hope this will be of help to share fun new ways from old ways.

Popular
Is Agroforestry the Key to Hardier Row Crops?Shea Swenson
7 Smokable Plants You Can Grow That Aren’t MarijuanaBrian Barth
Why Don’t We Eat Turkey Eggs?Dan Nosowitz
Goat Sex: Everything You Wanted to Know But Were Afraid to AskAndrew Amelinckx
Where Has All the Mustard Gone?Chloe Faure
Explore Modern Farmer
Related
Food & Drink, Lifestyle
7 Kinds of Sashimi Not Made With FishPanicha Imsomboon
Lifestyle
4 Ways Private Wealth Can Help the Small FarmAndre Gallant
Plants
7 Gourmet Vegetables to Plant Now for Fall HarvestBrian Barth
Plants
5 of the Most Valuable Crops You Can Grow in the US...Brian Barth
wpDiscuz
We use cookies on our website to give you the most relevant experience by remembering your preferences and repeat visits. By clicking “Accept”, you consent to the use of ALL the cookies.
Cookie settings ACCEPT
Privacy & Cookies Policy