With the history and prevalence of Japanese culture in California, it’s no surprise that everything from ramen to sushi to sake found its early American roots on the West Coast. Now, another staple of the Japanese culinary world is finding its home in California: ume, or Japanese sour plum. Ume is actually from Prunus mume, the Japanese apricot tree, but, flavorwise, the sour fruits are very different from plums and apricots and are not eaten fresh. Ume is either preserved, turned into salt-cured plum pickles known as umeboshi, or made into plum wine with shochu, known as umeshu.

“Ume can’t be eaten raw,” says Gen Yamamoto, the owner and bartender of his globally renowned, eponymous cocktail den in Tokyo. “It is too tart and sour and has a hard texture.”

The first time I came across ume in a cocktail was a revelatory experience at Gen Yamamoto, where he serves cocktail tasting flights in a minimalist environment designed to ensure that your full focus remains on the taste of precise libations made with seasonal fruits and Japanese spirits. The finale of a five-course cocktail tasting from Yamamoto was a hot drink with Yamazaki and ume, which together provided a peaceful, soul-soothing final note to the evening.

“Ume has its own strong tartness, acidity and flavors — there’s nothing to compare it to,” says Yamamoto. He uses the fruit in various ways to correspond with the seasons, including a preserved ume syrup that offers a refreshing note in summer or is served with its flowers in the springtime.

In fact, those flowers are actually the reason why at least one California farmer now has ume fruit available for harvesting. “I originally planted Prunus mume for cut flowers,” says Mike Madison of Yolo Press in the Sacramento Valley. “I eventually dropped that project, but the trees are still here. Now, my Korean and Japanese friends have discovered that I have them, and they come and harvest the fruit. They make umeboshi, as well as a variety of fermented drinks.”

Brian Murakami of Murakami Farms in Watsonville, California, is a third-generation strawberry farmer who also has a smattering of other plantings, including kiwifruit and ume. Just as Madison ended up with ume as a by-product of flowers, Murakami’s ume crop also began inadvertently. “My dad said that he planted the trees along the western edge of the strawberry fields to protect them from the wind,” says Murakami. “Growing ume has been more like a hobby to me.”

Now, beyond a growing customer base, he has found a passion for putting his ume to use. “I have been experimenting with how to make Japanese plum wine using different recipes for about five years, as a lot of the old traditions of making your own umeboshi and umeshu have been forgotten,” he says. “For consumers, the products are readily available at local oriental markets, but I don’t feel that they’re the same quality.” 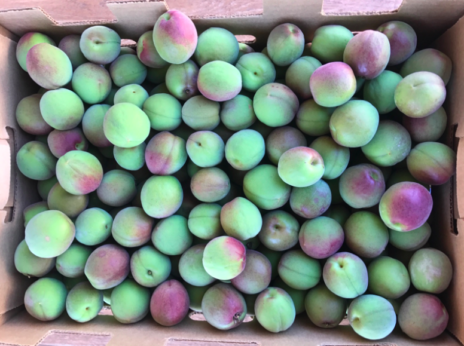 Ume may still be a niche product, particularly among the abundance of California, but there are certainly other farmers to be found. Madison says that there’s a 60-acre Prunus mume orchard a few miles from his own, and Murakami knows of a 40-acre site in southern California that supplies the Los Angeles region.

Increasingly, today’s ume appeal is found in the drink world, with Murakami noting that a local distillery and brewery have expressed interest. At St. George Spirits in Alameda, California, the distillery uses barrels that hold self-made umeshu to impart a distinct flavor to Baller, a Japanese-style whiskey that it designed directly with highballs in mind. The team at St. George Spirits was introduced to an ume farmer in California from their friends at Rintaro, a San Francisco izakaya.

For master distiller Lance Winters, umeshu barrels affect whiskey in a similar way to sherry barrels, one of the workhorses of the Scotch world. “Sherry barrels provide some really lovely notes for single malt whiskey, with a touch of sweetness, some acidity and a nutty complexity,” he says. “We made small batches of umeshu in our lab and saw that it provided the same characteristics as sherry but from a different angle. The umeshu sweetness comes from the fruit itself, as well as the rock sugar used in the umeshu process, the acidity from the ume and the nuttiness from the shochu penetrating the stone of the fruit.”

Behind the bar, Aaron Polsky of Harvard & Stone in Hollywood, California, deploys umeshu in both stirred and carbonated drinks. “I find that the most prominent flavor of ume is that of the pit — it’s almondy, but it usually matures and blends with the base it’s been sitting in, as well as the flesh of the fruit,” he says. “Given the preparation, it’s really like a super-punch of salty, sweet, savory and bright.”

One drink on his current menu is the Heatseeker, which pairs umeshu with the punch of habanero, ginger and five-spice, as well as Bertoux Brandy, soda, apricot and lime. Elsewhere, he deploys umeshu with gin, Q Tonic Water and pickled ginger. “It’s a Japanese version of a Spanish gin tonic,” says Polsky. “Umeshu is packed with dense flavors, so a highly carbonated ginger beer or tonic like Q Indian Tonic Water helps bring the flavors to the forefront.”

California farm market devotees can keep their eyes peeled for ume from late May to early June, though you’ll be well advised to heed expert advice and avoid trying a fresh bite.

Related
Food & Drink
Farmer’s Fave DrinksModern Farmer
Food & Drink
Craft Distiller Wants to Save Small FarmsAndrew Amelinckx
Lifestyle
5 Ways to Drink Your CannabisElla Buchan
Food & Drink
15 of the Best Vegan Restaurants in AmericaAnna Ben Yehuda
We use cookies on our website to give you the most relevant experience by remembering your preferences and repeat visits. By clicking “Accept”, you consent to the use of ALL the cookies.
Cookie settings ACCEPT
Privacy & Cookies Policy