Up close and personal with one of America's most fascinating farmers. 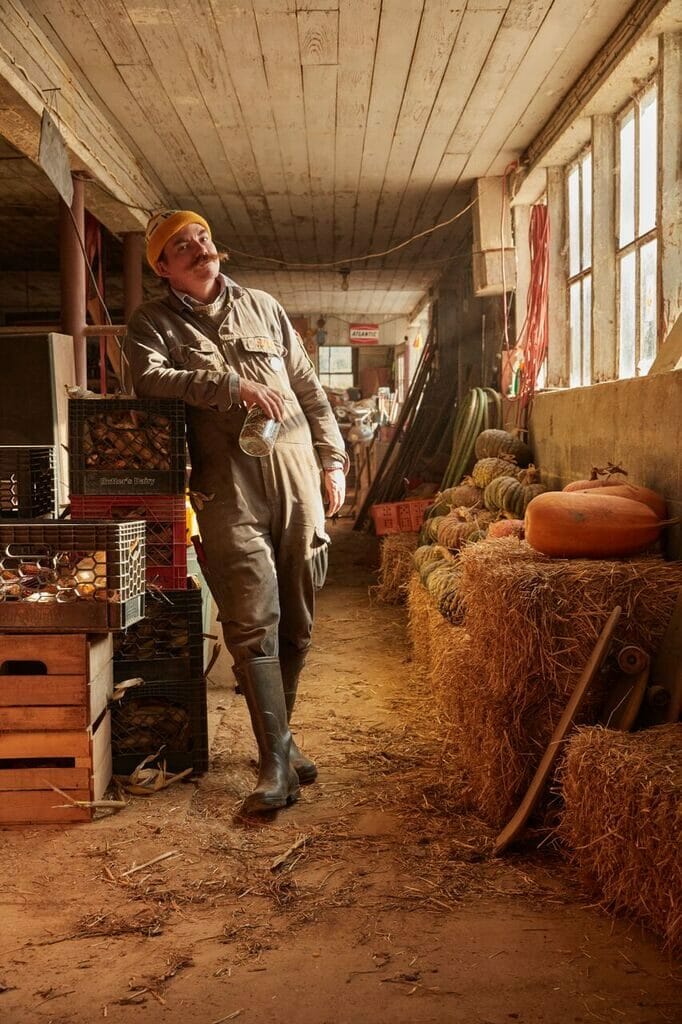 Farmer Tom Culton is as resilient a survivor as the heirloom crops and heritage breeds he raises on 53 acres in Lancaster, Pennsylvania, that his family has owned since 1741. A hand-lettered folk-art Fraktur certifying Culton’s birth in the back parlor, 38 years ago, speaks the language of his German Anabaptist ancestors. So too does the collection of viable seeds for more than 775 plant varieties that Culton painstakingly preserves. Heaven knows, though, what his forebears might have made of the yin-yang hex sign on his barn; the Skate and Destroy sticker on his pickup truck; the Twitter feed where he calls himself a “Goose and goat whisperer, fruit and vegetable sorcerer”; the tract houses and QVC warehouse looming beyond hedgerows that used to bound neighbors’ fields; the menus from big-city restaurants touting Culton Organics produce.

Back when Tom Culton’s mother, Nancy Fackler, and step-grandfather, Pete Herchelroth, joined forces to bring him up at the old homestead, its bucolic surroundings seemed almost impervious to change. The two adults labored over cash crops of tobacco and carrots, staples that thrived on their valley’s world-famous loam. They milked their goats and sold their hens’ eggs to passers-by. Fackler faithfully saved kitchen-garden seed from season to season. She and Herchelroth, chastened by his brief postwar fling with agricultural chemicals, relied on practices (organic in all but name) that generations of Mennonites and Amish had passed down. “My grandpa saw the folly of miracle drugs that only work until they stop working,” Tom Culton explains. “Dealing poison isn’t in our DNA.”

If chores left no one free to mind baby Tom, the sweet-tempered goats shared their pen with him. Fackler typed up a variant of The Farmer’s Creed (attributed to an early 20th-century Midwesterner) on an index card that remains in the kitchen today. At bedtime, or during sleepless nights, mother and son would read each other lines like, “I believe that farming, despite its hardships and disappointments, is the most honest and honorable way a man can spend his days on earth… I believe that by my toil I am giving more to the world than I am taking from it.” Graphic testimony to the hard-won balance of rural existence came from the yin-yang that Herchelroth painted in the 1960s, his gently subversive alternative to a touristy Pennsylvania “Dutch” star or distelfink hex.

“This family has always had an independent streak,” Culton says, citing a grandmother who managed two farms, two hotels, and a bar while rearing two children. “My mom and grandpa didn’t push me into farming. As a kid, I had free rein to do whatever I wanted.” From early on, his great passion was skateboarding, so Herchelroth built him a half-pipe near the barn and Fackler persuaded Lancaster County to construct a public skate park. Ironically, her son (who still rides a board for fun) credits skater culture’s rebellious punk rock ethos with putting him back on a tractor: “Somebody would say, ‘Tom, there’s no future in farming,’ and I’d think, Dude, I am going to farm.” He’s now, in fact, a 10th generation farmer. Fackler’s untimely death, in 2000, forced the 20-year-old to confront that resolution as a grownup. Grief-stricken, he nevertheless made up his mind to take over the farm: “And with a place like this to run, you can’t just ask for a mental-health month.”

Before long, local authorities granted a developer the power of eminent domain over Culton’s property. Irate, he took the floor at a township hearing: “I was, like, ‘You’ll have to drive the bulldozers over me. I am not going anywhere.’” In fact, Culton raced to the county Agricultural Land Preservation Board, which promptly established a joint easement with the Lancaster Farmland Trust that protects his open land forever. If a different threat, such as a gas pipeline, were to surface now, Culton says, “I could still get guerilla in a second.”

Reverence for his legacy soil galvanized a determination to rotate crops with meticulous care; shun industrial pesticides, herbicides, and fertilizer; and avoid wasteful irrigation (his biodegradable plastic mulch is made from non-GMO corn). Given their antipathy to Big Ag, he and Herchelroth vowed to press on as a two-man team valuing quality over quantity: “From the start, it’s pretty much been me and Grandpa. I don’t push him, he pushes himself. The guy’s 88, and he pushes me. There’s days when I’m not feeling in the groove, but he’s in perpetual motion. If one of us drops the ball – well, farming happens.”

For several years after his mother’s death, Culton farmed only part-time, in order to drive a commercial truck for extra income. “Grandpa understood that I really needed to get out of Lancaster, so I saved up for travel abroad.” Trips through France, Spain, and Italy (where in 2008 he attended Terra Madre, the International Slow Food Movement’s sustainability convention), he says, “changed my life. I was stoked by people’s passion for what they grew – and their willingness to entrust me with seed their families had been planting since, like, 1500. “I took it as a sign of great respect.” Frugal yet generous, that faith in natural cycles reminded Culton of his seed-saving mother. “Losing a crop that I planned to save for seed feels like losing a kid,” he says.

Sowing souvenirs from the foreign journeys that have become an annual ritual for Culton has enriched his native terrain. It has also revived his interest in treasure hunting at home. “I’ve grown peppers from the seed some relative of ours stuck in an empty jar 75 years ago,” Culton says. A recent experiment successfully germinated the kernels shaken off a dried wheat sheaf that Fackler had hung up as a wall decoration. Conservationist instincts also led Tom to heritage-breed poultry like American cotton patch geese, and Japanese Coturnix quail. He hatched his Basque ducks from eggs that a Spanish farmer mailed to Herchelroth as a surprise, hidden inside a Russian nesting doll. Culton often sleeps with the turkeys (Royal Palm, Narragansett, Bourbon Red, and Black Spanish) during the week before harvest. “It’s a lot of work, but I take it so emotionally. They’re so damned defenseless against a coyote or a bunch of foxes. These heritage breeds can fly into trees, but they’re not the brightest birds, and they’ll just jump into a fox’s mouth. The pen that once housed baby Tom’s four-legged nannies now encloses docile Swiss Oberhasli dairy goats.

On Culton’s first trip to Europe, he marveled at the cultural bonds linking farmer to chef, even deep in the countryside. “I came back with the magical thought that I could make connections like that over here.” Thanks to the extraordinary produce and offbeat flair that he displayed at venerable farmer’s markets in Lancaster and Philadelphia (his accessorizing of overalls, straw hats, and bare feet with silk scarves cut a stylishly rustic figure), restaurateurs and celebrity chefs in New York City and Philadelphia, like Tom Colicchio and Marc Vetri, soon vied for his perfumed fraises du bois, candy-striped ‘Chioggia’ beets, white watermelons, and purple ProvenÁ§al artichokes. The foodie press dubbed him a “rock-star farmer.” In 2009 Colicchio, the head judge on Bravo’s Top Chef, enthusiastically chronicled a road trip to Culton’s farm in Food & Wine magazine, praising the hog maw (stuffed pig’s stomach) and apple sauce that Herchelroth whipped up for lunch as “one of the best home-cooked meals I’ve had in recent memory.”

The following year found Culton in New York City, rubbing shoulders with Bette Midler and Martha Stewart – and showcasing his wares – at The Art of Farming, a tri-state heirloom vegetable auction hosted by Sotheby’s. He revisited Manhattan a month later, taking the train from Lancaster with a four-foot 70-pound ‘Long of Naples’ squash for a guest spot with David Letterman. Bon Appetit reported buzz that Culton might snag his own farm-to-table cable series. “I could have run with it,” he reflects, “but I put the skids on that kind of TV. They can make you look however they want, and that’s not a good fit for a person like me. Nobody wants to be treated as a novelty, and I naÁ¯vely encouraged that at times with chefs too, helping them anticipate trends. Now I’m looking for sustaining relationships, not fleeting ones.”

None has proven more durable, or closer, than the eight-year friendship Culton has enjoyed with Philadelphia chefs Cristina Martinez and her husband, Ben Miller. Their restaurant El Compadre, which specializes in Mexican barbacoa cuisine, has been widely acclaimed. “But back when we only selling out of a food cart,” Martinez remembers, “Tom made a special trip to the city in December, just to deliver the gigantic banana squashes we served as an atole. He came through the snow, barefoot!” They now buy almost 23,000 pounds of the flint corn he grows for them from seed supplied by the Zapatistas, an indigenous organization in Mexico. “The tortillas we make from that corn tie into the story of our immigrant community in South Philly,” Miller says. When Martinez’s son died, Culton named an unlabeled Zapatista variety in the young man’s memory and laid a few kernels of it in his coffin.

“There should be farm books, like cookbooks, except they’d give recipes for life,” Culton muses. He already helps to nourish the Lancaster community by self-styled tithing, through the truckloads of sweet potatoes and other freshly harvested produce he donates to area churches and missions. “Sometimes I fantasize about working at Native Seed Search, in Arizona, or the Svalberg Global Seed Vault, near the North Pole. But that’s just for a different time in my life. I would never sell a seed. My whole collection is willed to the Seed Savers Exchange.” At present, he feels drawn to practical teaching, along the lines of what he’s experienced at the Young Farmers’ Conference at the Stone Barns Center, in Pocantico Hills, New York. “What I really want to grow now is farmers. There’s not a lot of land out there for kids to get started on, especially organic farmland where they aren’t walking into a problem.” With his grandfather’s blessing, Culton adds, he has begun to consider ways of “offering up” his place, at least for a season, to give determined, task-oriented people – perhaps military veterans – an opportunity to learn agricultural skills and try their hand at running a farm. “Whenever Grandpa and I kick around ideas like that, I can hear my mom say, ‘Make the most of your opportunities, Tom. Realize your potential – and maybe help out a few more people than fancy chefs.’”

I love this story! And I can’t believe I’ve lived a mile away from all this organic, historic greatness for 15 years!