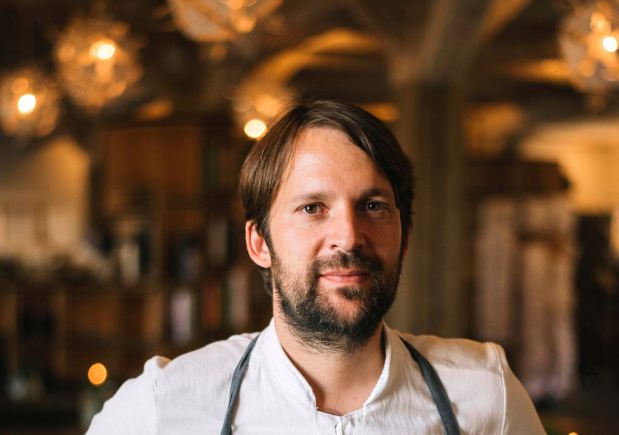 Redzepi has co-authored a book with David Zilber, the director of Noma’s fermentation lab, that reads like a textbook for fermentation. Pumpkin seed miso, anyone?
Photography The Noma Guide to Fermentation
Share
Tweet
Pin
Email
86 Shares

It is well known in the food world that the intense, at times startling flavors one encounters at Noma, the Copenhagen restaurant named the world’s best four times in a five-year period by Restaurant magazine, are a product of chef René Redzepi’s predilection for ingredients foraged from the wilds of Denmark. Less known is that the flavor journey Redzepi captains for his guests owes much of its zest to his mastery of the fermentation arts.

Well, the cat’s now out of the bag, as this week marks the release of the Noma Guide to Fermentation (Artisan), co-authored by Redzepi and the director of Noma’s fermentation lab, chef David Zilber. This is a cookbook in the sense that it contains recipes, though it reads more like a textbook for a graduate-level fermentation course — albeit one penned with the lightness, humor and journalistic acumen of a Michael Pollan tome.

In other words, Zilber and Redzepi take you far beyond kimchi and kombucha to the worlds of black fruits and vegetables (a slow, controlled decomposition that essentially caramelizes the food); misos and peasos (any number of grains, legumes, seeds and nuts can be transformed into a miso-like product); and garums (fish sauce and its kin).

The alchemy of fermentation is not an end at Noma, but a starting point for inventing ingredients that have never existed. The soft rind of a fermented fruit might be peeled off and then dehydrated until it’s crisp and ground into a powder to be sprinkled into a recipe like an otherworldly spice. In this mad scientist fashion, Redzepi arrives at dishes like cabbage leaf salad dressed with an emulsion of caramelized beef garum pulp, white currant juice, and fermented mushroom water. Or dipping condiments like fermented shrimp-rose paste (“the flower’s sweet aroma is a perfect foil to the fishy funk,” say the authors).

Redzepi bares his big secret in the introduction: “Fermentation isn’t responsible for one specific taste at Noma — it is responsible for improving everything.” What the book makes clear, however, is that his secret isn’t fermentation, it is the ways in which he’s elevated it to a fine art.

Redzepi, in the midst of a North American tour to promote the book with Zilber, took time to speak with Modern Farmer about his decade-long journey into the universe of fermented food. 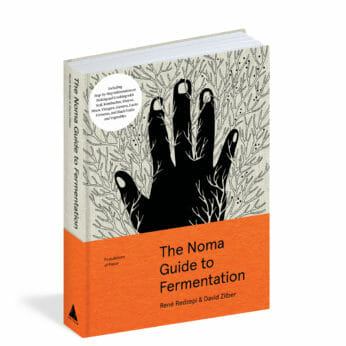 Modern Farmer: The living enzymes and fermented foods are renowned for their health properties. But I gather your primary interest in fermented foods is their culinary qualities.

René Redzepi: We did not start fermenting because of health benefits. It was simply that we needed more tools in our box. Or said in a different way — since we are from Denmark — more Legos to play around with. Once you start mastering some of these ferments, your cooking gets easier. I believe that’s the power of fermentation.

MF: In the book you talk about your first fermentation experiments in a boat that was docked outside the restaurant in 2008. Then in 2014 you dove in head first and built a fermentation lab with three shipping containers. Take us there — what do you see today when you walk into the fermentation lab?

RR: Well, it looks a lot like a lab. It’s where we keep all our fermentation equipment. It is set up for innovation purposes, not for restaurant production. On the right and left sides of the lab we have fermentation chambers that hold temperature and humidity at specific levels. That’s where the microbes are slowly working their magic turning the food into something different. It feels like cooking, but in a different way. I love going in there.

MF: I’ve made sauerkraut and kimchi on-and-off over the years and some batches have that characteristic zing, while others have more of a funk — not in a good way — even though I’m preparing them the same each time. What do you think accounts for the difference?

RR: I know what you’re saying. It may have something to do with the time of the year you are fermenting.

MF: Now that you mention it, it does seem that I get more funk in the summer when the temperature in my kitchen is more variable.

RR: It can also be a result of using different types of cabbage. The specific microbial strains that you cultivate, which come from the environment in your kitchen, the cabbage itself, and even your body, are another variable that is always changing. You can’t always have a set recipe when you’re fermenting – you have to check the food and taste it all the time to see what it needs. Sometimes it takes five days, sometimes it only takes three days to reach optimal fermentation. But I believe you can always get that thing that you are looking for, it’s just a matter of following the fermentation a bit more closely. Once your trained in it, you can almost see it. You get a feel for it like a chef at a steakhouse when they are whipping up a béarnaise sauce every day of their career — they know when the sauce is going to split before it splits because they can see something change on the surface of it. My point is that you eventually get a feel for it and you can be very precise about when to stop the ferment.

MF: In terms of food safety, I find the difference between zingy sauerkraut and rotten cabbage is quite clear. But when you get into more advanced fermentation techniques, like garums and black fruits, are there instances where the food can go bad and it’s not obvious?

RR: As you are learning to ferment there might be moments where you are in doubt about whether something is good to eat or not. In our book it is clearly outlined for each ferment what to be careful of. Fermentation is a very ancient form of cooking, but it’s very novel among the general population today, and for that reason people can be very nervous about it. But no one is in doubt whether their meat is rotten or fresh, right? That’s because we handle it on a daily basis in our lives. The same thing becomes true once you have a more experience doing these ferments — you just know.

MF: Has anyone at Noma ever learned that the hard way and gotten sick?

RR: No, that’s never happened with fermentation. But it has happened when we forage.

MF: How has fermentation influenced the evolution of your menu?

RR: Today, in anything you eat at Noma, there will always be fermented foods in every single bite. That’s a big change. It didn’t used to be that way. But that is how we have evolved. It’s become part of our DNA, the skeleton of how we build things here. We have a much better understanding of how to work with fermented foods, and we now have an array of more than 100 products that we have developed in the fermentation bunker, from pastes and liquids to powders. It is a big larder that we have created and we keep expanding it.

MF: Tell us more about some of your more unusual creations, like grasshopper garum. The average home chef probably isn’t going to start with that recipe, but it does offer some inspiration for breaking the molds of common cooking techniques.

RR: When we first did grasshoppers, it was a very weird thing for us. We wanted to somehow disguise it, to make it not look like an insect because it is such a taboo. When we fermented them, it turned into this rich, potent liquid that’s like a mix between a soy sauce and a Mexican mole. It is one of the most amazing ferments we have in our repertoire. But don’t start with that — take the strawberries left over in your fridge and mix them with some salt in a lacto ferment and see where that takes you.