How Cara Nicoletti’s Sausage Is Made: Hard Work…and Lots of Veggies

What happens when a butcher isn't much of a meat-eater? These colorful, flavorful, veggie-packed sausages. 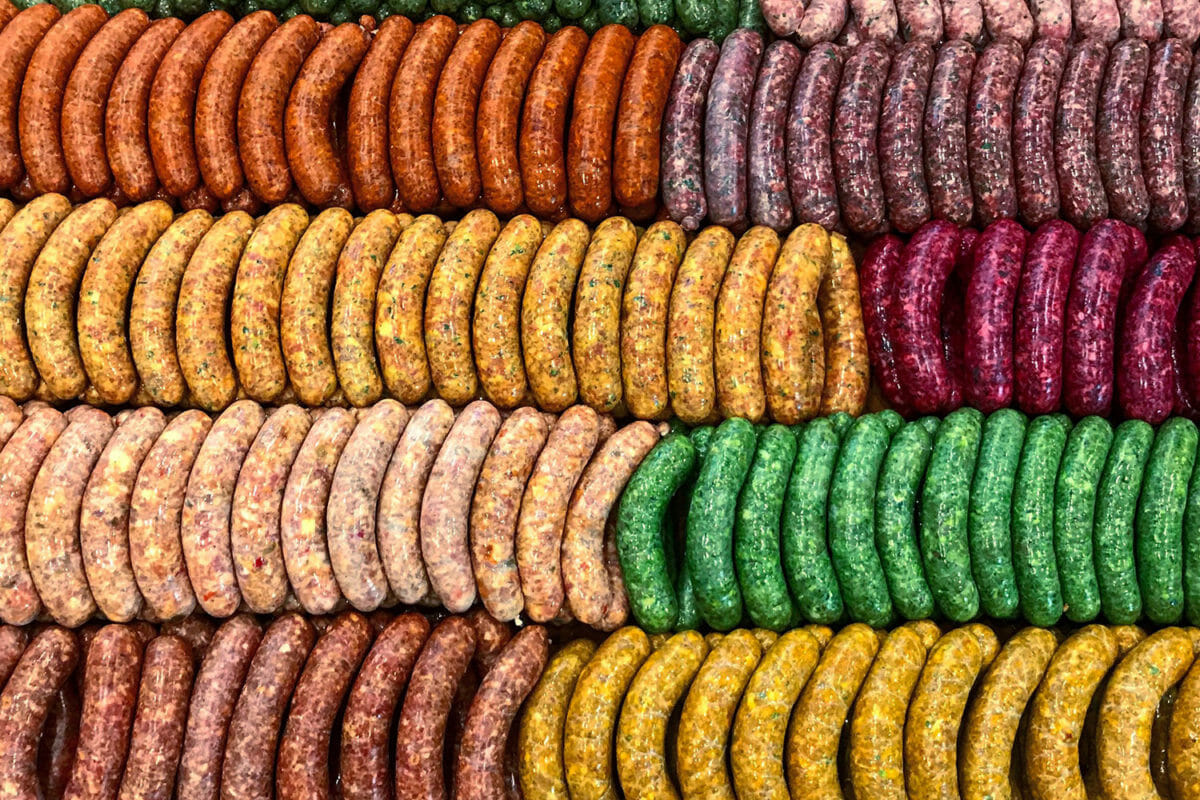 Cara Nicoletti grew up in a butcher shop, but when she eventually took up the family trade, she put a decidedly personal twist on the art.
Photography Cara Nicoletti
Share
Tweet
Pin
Email
577 Shares

“I’m one of those people constantly panicking and saying ‘Why are you not doing more and what are you even doing, you loser?’” Nicoletti says with a laugh, as if becoming a well-known food personality, cookbook author, baker, butcher, and host of “The Hangover Show” on Vice Munchies is the career path of a slacker. “That’s just days when my brain is being super mean. That’s something I’m working on this year, being nicer to myself.”

While her brain might play tricks on her, Nicoletti is plenty nice. She’s also rip-smart and, at a very young age, is a major influence on the culinary world. Having grown up in family butcher shops in Massachusetts (Nicoletti’s great-great-grandfather and great grandfather started as butchers in the Ukraine before they fled to the U.S. during the Holocaust) and later apprenticing at The Meat Hook, one of New York’s premier butcher institutions, she quickly began to develop her own take on the trade.

“It’s about the time and care that goes into raising one good animal that makes you think of it as more of a luxury than necessity.”

See, nowadays this butcher doesn’t actually eat a lot of meat (grains, veggies, fish and “so many herbs” are her day-to-day sustenance). The reason is simple: as the daughter of butchers, Nicoletti admits that vegetables were MIA in her life until she started working in restaurants – and now she’s doing her sneaky part to get everyone eating more vegetables as well.

“My feelings about meat and eating meat changed a lot when I started going to the farms that provided our cattle and sheep, and the slaughterhouses,” explains Nicoletti, adding that to her, “It’s about the time and care that goes into raising one good animal that makes you think of it as more of a luxury than necessity.”. 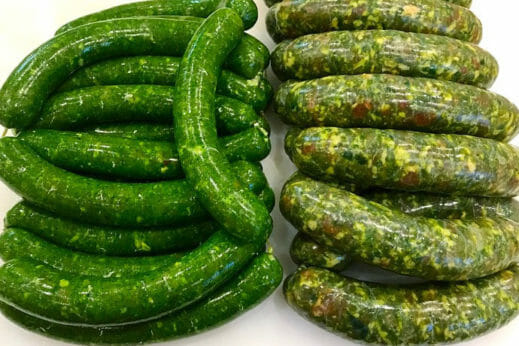 Make sure you eat your greens! The left is chicken with kale pesto, and right is chorizo verde.

The young butcher’s attitude could, perhaps counterintuitively, be summed as such: Let’s chill out a bit with the meat-guzzling mentality.

“Most people my age – and my customers – are trying to figure out ways to get more vegetables into our food,” Nicoletti explains. “It’s also a way to make our meat go further.”

To achieve this goal, Nicoletti creates beautiful, tasty, vegetable-and-herb-spiked links in (nearly) every color of the rainbow, currently showing off her links at Foster Sundry in Brooklyn. But if you’re thinking cheese and parsley or apple chicken sausage type mixes, think again. That’s bush league. To make these veggie-laced, brightly-colored sausages, Nicoletti takes some of her favorite dishes – maybe a soup (matzoh ball or pho, perhaps?), a sandwich (Philly roast pork? Banh mi?), or even a full entree (like borscht, or chicken tikka masala) – and then gets to work combining meats, veggies, herbs, and seasonings to R&D said dish into a sausage (a process that involves eating said meal in non-sausage form many, many times). 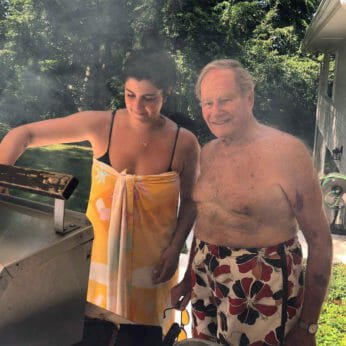 Cara’s grandpa, pictured here, is also a butcher and at first didn’t want his granddaughter to follow his footsteps. He eventually came around to the idea and the two are now closer because of their shared trade.

The results of this alchemy is as beautiful as it is delicious. Nicoletti’s beet-bombed borscht sausage is nuclear blood red, all thanks to the veggie. Spinach chlorophyll gives a radiant green tint into other varieties. There’s quite a bit of testing (and a lot of fails) that go into recipe development, mostly because veggies = moisture = the bane of sausage making. Just because you like a dish doesn’t mean it will sausage, one example being a Reuben sandwich sausage catastrophe that haunts Cara’s dreams.

Vivid colors and sausage may not necessarily sound… appetizing, but one glance at Cara’s Instagram and you’ll understand why she’s earned more than 20,000 followers. Let’s set the record straight, though: This isn’t the “unicorn latte” of the sausage world or any such nonsense concoction designed simply for quick ‘gram thrills.

“I do think that sometimes people look at my sausages or my Instagram and think I’m adding dyes or doing it as a gimmick. Really, the truth is the colors happen because of the recipes and amount of produce I use,” explains the butcher. “It was never like ‘I want to make these super-colorful sausages’ – it was a really exciting byproduct and customers buy with their eye. They’re going to buy a bright pink sausage filled with beets over an Italian sausage, and that makes me happy. They really do taste good, and that’s first and foremost.” 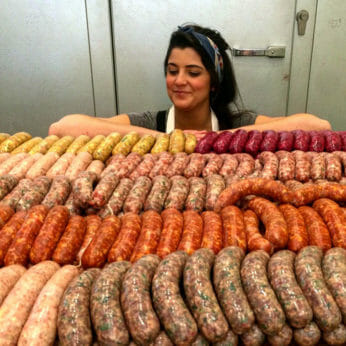 The artist admiring some of her work.

Another side-effect of IG fame? Lots of strangers trying to slide into the woman’s DMs (and presumably lots of ill-advised sausage jokes).

“My entire DM box is butchers asking for my recipes. It’s like no, you cannot. Work harder and figure it out on your own. There’s a lot of people who want to get into food and butchering, and I can always sense when it’s because they want to have an interesting Instagram – those are the ones who don’t last long, once they realize the job is kind of shitty.”

And those quitters aren’t wrong. It is a shitty job.

“My grandpa did not want us doing this,” Nicoletti reflects. “When I was kid, I always thought it was because I was a girl, and he didn’t want to pass it on to women. But it’s because it’s a really fucking hard job and he wanted more for us.

Years later, when she was 22 or so, the aroma of blood and sawdust drew Nicoletti back into a butcher shop after stints cooking and baking in restaurants. Grandpa was not happy. But once the initial shock wore off, it became a point of pride and grandpa-granddaughter bonding. “It’s been an amazing thing for our relationship,” Cara beams. “I don’t think I would have found this path for myself if it hadn’t been something that was in my family.”