After packing their kids off to college, a couple turned a derelict patch of earth in East Austin into a flourishing urban farm. 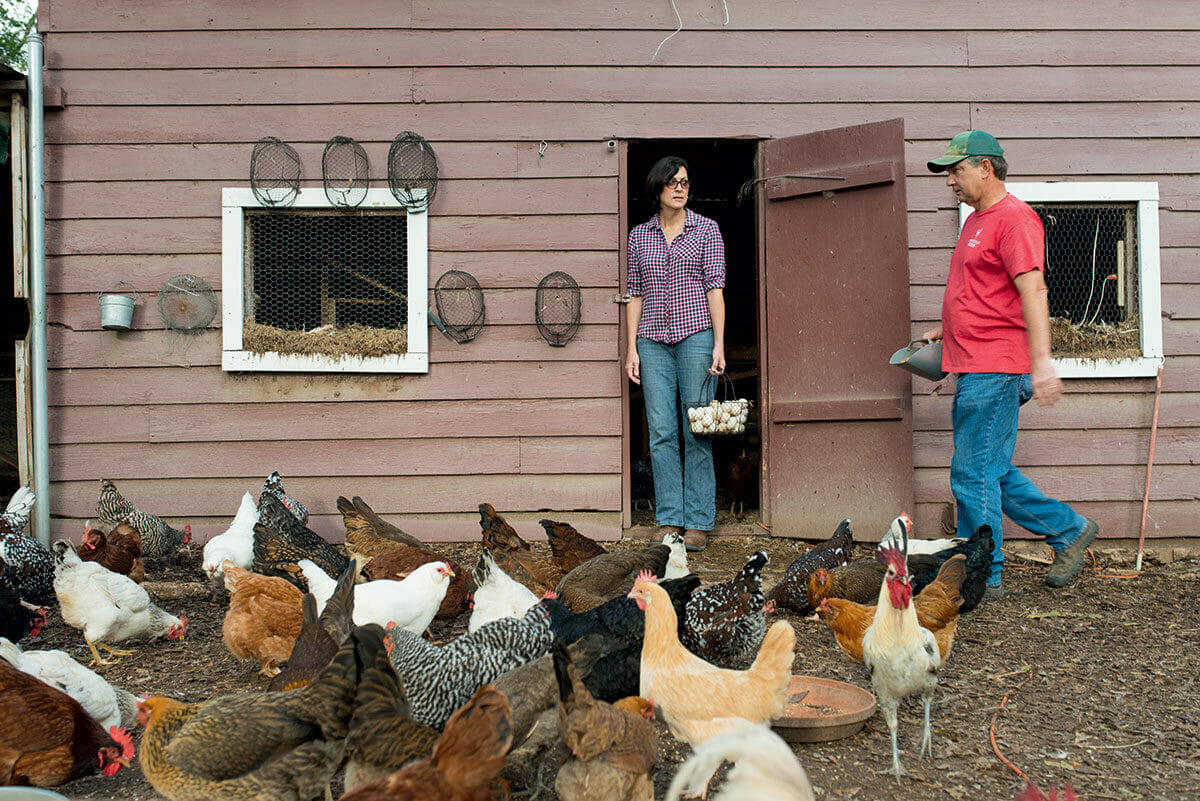 Officially, Paula and Glenn Foore’s Springdale Farm welcomes visitors on Wednesdays and Saturdays only. But it’s not unusual for the duo to look up from Sunday brunch to discover strangers wandering amid the tomato plants or ogling the chickens. “Our daughters joke that we live in a state park,” says Glenn. 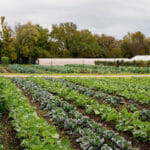 Springdale’s fall vegetables, like cauliflower, Brussels sprouts, and cabbages, fare better than their summer crops, due to Austin’s blistering heat. 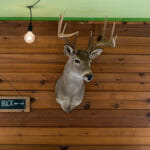 A trophy from one of Glenn’s hunting trips hangs in the farmstand. 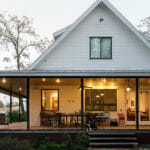 The house measures a modest 1,800 square feet and doesn’t include a dining room. “We knew we’d never use it,” says Paula of the family’s preference for eating on the porch.

Hardly. Springdale borders an industrial strip in East Austin, Texas, clogged with warehouses and power lines, where the verdant five-acre spread attracts curious passersby, as well as a number of noted chefs. “To have a farm right in the city is huge,” says Todd Duplechan of Lenoir restaurant. “You’ve got the freshest ingredients a 10-minute drive from downtown.” Though the Foores purchased the property a quarter-century ago, they admit to ignoring its potential for over a decade. Then, the 2008 recession hit their landscaping firm hard. Suddenly, what had been a place to park lawn equipment and extra plants signified an untapped income opportunity. Glenn and Paula redirected the firm’s crew toward planting vegetables on the East Austin plot, while the couple continued raising three girls in leafy North Austin. Recalls Paula, “We kept putting in beds until it was wall-to-wall produce, everything from mizuna to okra.” She and Glenn also invested in approximately 25 laying ducks and 100 heritage hens and opened a farmstand out front.

By 2010, the two had decided to go all in, relocating their whole lives to Springdale. “Our youngest daughter was headed off to college,” Paula explains. “The neighborhood was improving, and we were tired of commuting.” They enlisted architect Eric Rauser, who helped envision a rustic-modern, two-story home with a peaked roof, generous porch, and reclaimed-wood floors. “It’s more Midwestern farmhouse than Texas ranch,” notes Glenn, 60, an Ohio native. “It just felt right.” 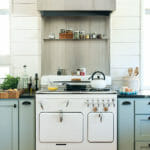 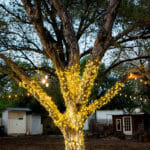 This massive pecan tree, strung with small twinkling lights, serves as a gathering spot for farm-to-table dinners and wedding receptions. 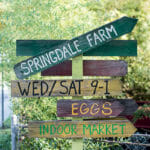 Paula and Glenn painted this sign themselves. “If we’d known how many times it would be photographed, we would have done a more professional job,” she says.

Ditto his newfound career. “I wouldn’t call farming a passion so much as an obsession,” he says. “It’s full-time as hell, and we love it.” An instant jackpot, however, the venture was not. To make ends meet, the Foores started hosting weddings and other parties at least once a month. Two nights every week, Sonya Coté, chef-owner of Austin’s beloved Hillside Farmacy, stages an on-site supper club at Springdale, called Eden East, devising five-course menus – which might include squash blossoms with Texas blue crab, or grilled sirloin with fresh peas and arugula pesto – that incorporate ingredients picked steps away. “If it weren’t for these events, we’d be sunk,” admits Paula, 57. 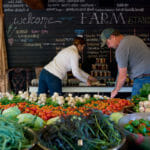 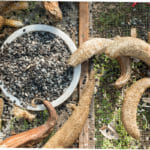 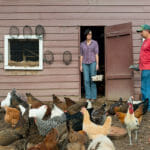 A few years back, she and Glenn came dangerously close to that fate. As Austin boomed, the city began debating the rights of urban farms to serve as social venues, putting Springdale’s very lifeblood in peril. “We were ready to quit,” remembers Glenn. “And that’s when our clients said, ‘No way, we’re dragging your ass across the finish line.’” Chefs like Duplechan, Coté, Michael Fojtasek of Olamaie, and David Bull of Second Bar & Kitchen agitated on the Foores’ behalf. Homemade signs of support popped up in windows all over town, and #WeAreSpringdale trended briefly on Twitter. The city council ruled to allow the farm to continue as an event site, effectively saving Springdale, in 2015.

“We haven’t invented anything new. We’re just planting seeds and not spraying chemicals on them.”

Even after a decade with their hands in the dirt, Glenn and Paula still face an agricultural learning curve, thanks to Austin’s fickle weather. The intense summer heat can render zucchini impossible to cultivate, and an unexpected hailstorm might wipe out a tomato crop. “We had to discover the hard way that, one year your beets will come up in the middle of October, and the next, not make an appearance until January,” says Paula. 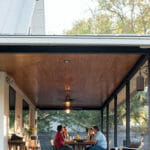 Two of the couple’s daughters – Jessie, 26 (left), and Creel (right) – live nearby. Darrelle, 30 (not pictured), recently moved to Portland, OR. 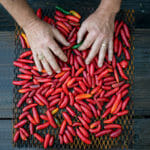 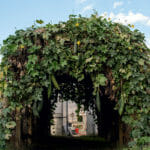 Loofah vines blanket a trellis at Springdale Farm; the Foores produce their own loofah soap and also sell the gourds to area chefs for pickling.

Nevertheless, the Foores continue to experiment with unusual vegetables, such as edible Asian loofah gourds and ‘Rattlesnake’ pole beans, courtesy of a $7,500 grant for trialing heirlooms from the Austin Food & Wine Alliance. Such risks delight the city’s restaurateurs. “I spend a lot of time with Paula and Glenn in the field, saying, ‘What do you think about growing some Cajun peppers?’” reports Lenoir’s Duplechan. (His most oddball request: bark from their pecan trees to craft cocktail bitters.) 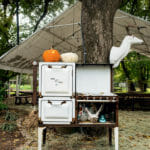 An old stove functions as the hostess stand when Springdale welcomes the Eden East supper club. 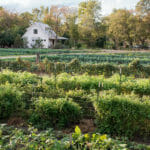 Built in 2009, the Foores’ home sits smack-dab in the middle of their crops, including the tomatoes, cauliflower, and other brassicas shown here. 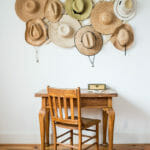 Sun hats form a casual display above an antique game table in an upstairs bedroom. 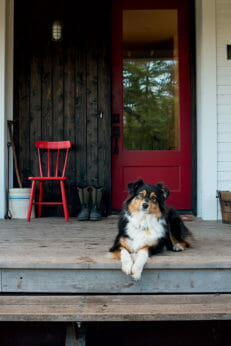 The family’s Australian Shepherd, Ellie May, spends most of her time with the ducks. “She thinks she owns them,” says Paula.

Some of the folks who show up at Springdale on Sundays, Mondays, Tuesdays, Thursdays, and Fridays aim to glean kitchen-gardening tips. A few are eager to discuss the politics surrounding organic agriculture. “We haven’t invented anything new,” insists Glenn. “We’re just planting seeds and not spraying chemicals on them.” He and Paula opted out of the official certification process, since each of their roughly 75 crops would require a separate paper trail. “Our customers know how we farm and that our methods are beyond organic – whether we’ve written a check to the USDA or not,” explains Paula. Instead, she and Glenn focused on founding a nonprofit organization, the Springdale Center for Urban Agriculture, to develop educational programs for local kindergarten through high-school students.

Two winters ago, the Foores vowed to do something that once seemed unthinkable: take a vacation. For their first trip together in eight years, Glenn and Paula headed to Cabo San Lucas, Mexico. Not that this husband and wife spent the week sipping umbrella drinks by the pool. “We made a point of visiting all these little organic farms down there, to check out what they were doing,” says Glenn. “That’s our kind of escape.”