3 Agritourism Hotspots to Visit This Summer

From the southern highlands to the foggy California coast and Canadian beach towns, these fun, farm-centric destinations offer a fun and different summer vacation. 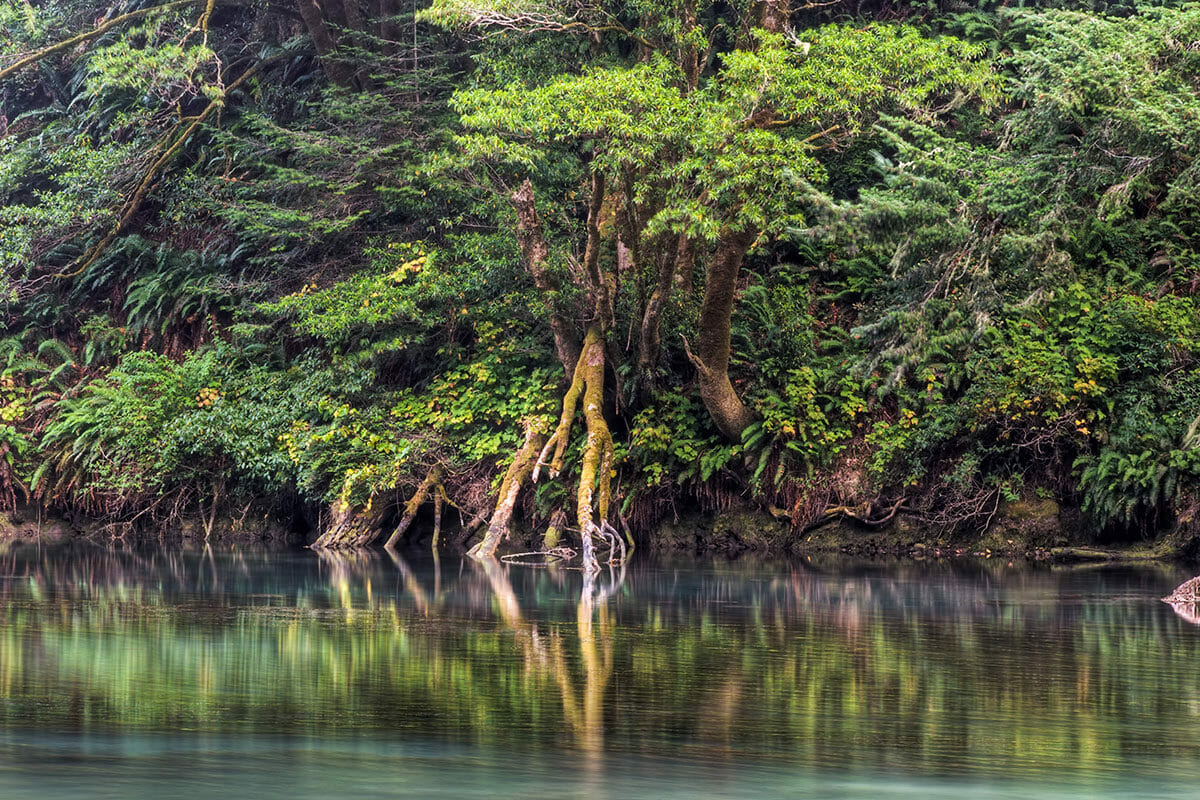 No, this is not some exotic, tropical locale. This is along the Albion River, in Albion, CA, which is in Mendocino county.
Photography By Jeffrey T. Kreulen / shutterstock.com
Share
Tweet
Pin
Email

Many regions have farms that also run (or partner with other organizations to run) restaurants, breweries or distilleries, B&Bs, workshops, and other interesting experiences, making these areas great choices for summer road trips. Here are three of our favorite picks. 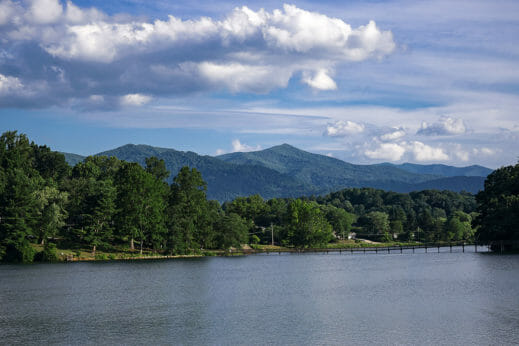 Despite having the highest average elevation east of the Rockies, Haywood Counta, NC, is home to more than 700 small farms. Photo by Jennifer Crumholt / shutterstock.com

This picturesque part of the Appalachians lies west of Asheville, on the way to Great Smoky Mountain National Park. Despite the rugged terrain – Haywood County has the highest average elevation (3600 feet) of any county east of the Rockies – more than 700 small farms are tucked into the hills, hollows and valleys.

Known For: Ramps, ginseng, and moonshine

Local Flavor: The region has a long history of mountain crafts, from the illegal (bootlegging whiskey) to the artful (weaving and pottery). More recently, it’s become a haven for urban expats and back-to-the-landers of every stripe.

Sights and Sounds: The Blueridge Parkway snakes through the high mountains on its way to Asheville – a great way to soak in the serenity of the Appalachians. Haywood County’s small towns are a great place to soak in the local bluegrass scene.

Where to Eat: Frog Leap Public House in Waynesville sources a hearty portion of it menu – from the collards and ham hocks to the pickled ramp chevre and the pecan-crusted sunburst trout – through local purveyors.

What to Drink: The “flavored” moonshines of Elevated Mountain, a craft distiller of top-shelf whiskeys in Maggie Valley. The distillery is open for tastings and tours, where you learn a bit of local moonshine lore and hear about the farms the company sources from.

A Cool Farmstay to Consider: Pigeon Valley Farms, just west of Asheville, offers three rooms for rent plus a 200-square-foot “tiny house.” It’s more a permaculture homestead than a farm, with options to pitch in on garden and livestock chores. 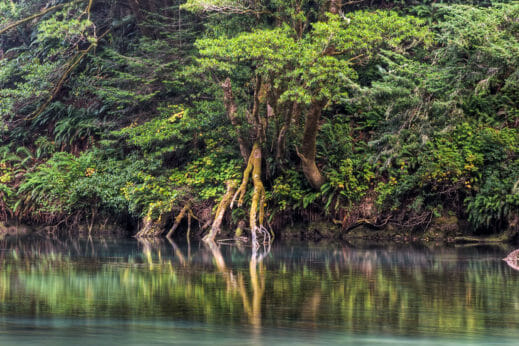 No, this is not some exotic, tropical locale. This is along the Albion River, in Albion, CA, which is in Mendocino county. Photo by Jeffrey T. Kreulen / shutterstock.com

This coastal enclave in northern California has quietly transformed from a lumberjack-sort-of-place to a foodie destination for Bay Area hipsters.

Local Flavor: A quieter version of Napa with a bit of NorCal pot-grower vibe thrown in for good measure.

Sights and Sounds: The coastal hills of are carpeted in lush redwood forests, where many a wild fungi are found. The beaches are pristine, but the water is frigid – a surfer’s paradise.

Where to Eat: At the MacCallum House, in the sleepy, but pricey hamlet of Mendocino, chef Alan Kantor serves up local cheeses, foraged berries, and the region’s famous Dungeness crab and abalone. Kantor honors his purveyors on a food-shed map found in the restaurant foyer.

A Cool Farmstay to Consider: The Apple Farm, founded by Don and Sally Schmitt (the couple who created Napa’s famed French Laundry restaurant in the seventies), offers three bungalows set in a 30-acre orchard. Guests have the option of cooking one garden-fresh meal each day with the family. Located in Anderson Valley, a Garden of Eden-sort-of-place tucked between the mountains, you’ll be in the center of Mendocino’s County’s artisanal farm scene. 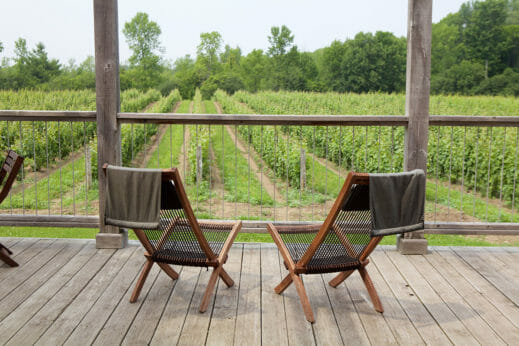 You could be sitting in these chairs, sipping a glass of locally-made wine, overlooking a vineyard. Photo by Jaana Hein / shutterstock.com

Located midway between Toronto and Montreal, and about two hours from the border crossing near Watertown, New York, this Lake Ontario peninsula has long been known for its miles of white sand beaches. But more recently, The County, as locals call it, has become a major agritourism destination, with scores of wineries, artisanal creameries, and festivals.

Local Flavor: Vogue has billed Prince Edward County as the “Hudson Valley of Canada.” This is where Toronto/Montreal food scene parties on the weekend.

Sights and Sounds: Sandbanks Provincial Park boasts enormous dunes and crystal-clear water. The beach gets crowded on summer weekends, so get your suntan during the week and tour the countryside on the fin de semaine.

Where to Eat: The Drake Devonshire, in the hamlet of Wellington, is the sole rural iteration of a famed Toronto food and lodging empire. The menu is chock-full of fare from the nearby hills and estuaries.

What to Drink: The Prince Edward County VQA is a recently designated appellation – this is no Napa or Bordeaux – so keep your expectations modest. That said, the 2009 Ti-Rouge from Redtail, an 11-acre organic solar-powered winery near Consecon, is a fun, fruity place to start.

A Cool Farmstay to Consider: The Fronterra Farm Brewery offers one of the more unique lodging options in the area: “log-framed canvas prospector tents,” featuring an ensuite bathroom and outdoor kitchen. Their “organic heirloom permaculture gardens” produce not only food for your stay, but the hops and barley for the beer brewed on-site.

Popular
7 Smokable Plants You Can Grow That Aren’t MarijuanaBrian Barth
Record-Breaking Egg Profits Prompt Accusation of Price GougingClaire Carlson, The Daily Yonder
Could New York Become the Mushroom State?Sara Foss
6 Differences Between Llamas and AlpacasAndrew Amelinckx
Hell in High Water: The Story of Devils Lake, North DakotaSharlene Breakey
Explore Modern Farmer
Related
Features, Food Security, Labor
The Rise of Virtual Farmers MarketsLeah Borts-Kuperman
Environment, Labor, Water
California Farms and Farmworkers Attempt to Recover From Record FloodsNaoki Nitta
Books, How-To, Lifestyle
How to Turn Your Garden Into a Business, No Matter the SizeEmily Baron Cadloff
Food Security, Labor, news
A New Egg Co-operative Has Hatched in the Western U.S.Lindsay Campbell
wpDiscuz
We use cookies on our website to give you the most relevant experience by remembering your preferences and repeat visits. By clicking “Accept”, you consent to the use of ALL the cookies.
Cookie settings ACCEPT
Privacy & Cookies Policy