Seed catalogs be overwhelming - but Modern Farmer can help. 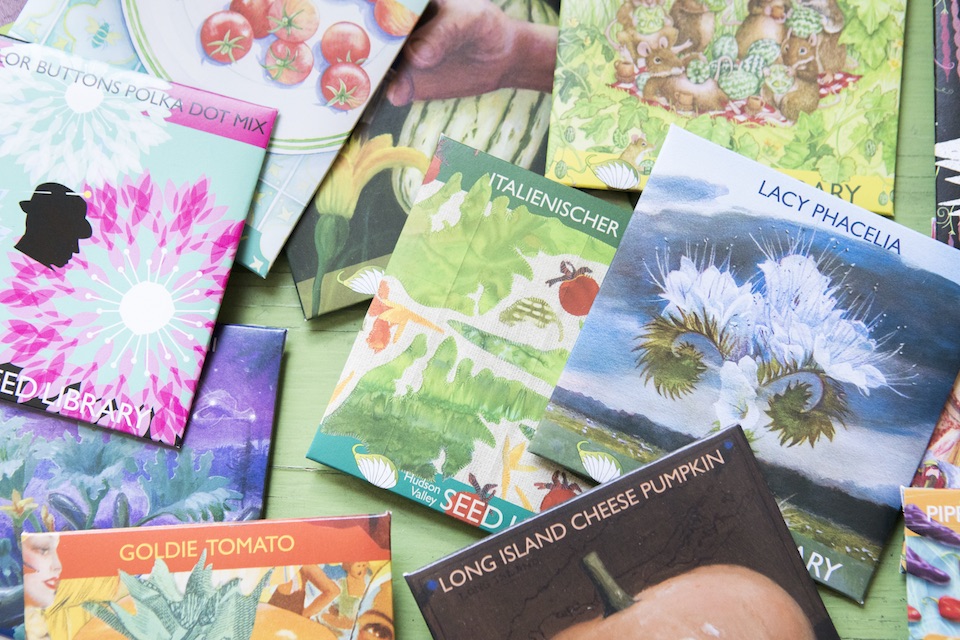 The Hudson Valley Seed Company sells their heirloom seeds in these art packs. The images on each are inspired by the specific plant.
Photography Photo by Aliza Eliazarov.
Share
Tweet
Pin
Email
158 Shares

To help guide novice growers through the romantic process of seed selection and garden planning – and temper the irrational urges of experienced growers who may suffer from seed-shopping addiction – Modern Farmer has put together this short tutorial. Happy picking!

Like so many other industries, seed catalogs have words and phrases that are important to understand. Sure, you might know what the certified organic label means (and it’s OK if you don’t! It ensures that the seeds have been grown in organic soil and have been nurtured and processed in accordance with the USDA’s National Organic Program), but seed descriptions go a bit further. Here are common terms you’ll find in catalogs, defined:

Disease Resistant: Two of the most important words to look out for in seed catalog listings. On some listings you may notice acronyms like VFN or VFNTSt, which is a shorthand description for exactly which diseases a variety is resistant to. (A VFN tomato is resistant to verticillium wilt, fusarium wilt, and nematodes). Each seed catalog should have a key for its disease resistance codes.

Heirloom: Traditional varieties that have been handed down from generation to generation, rather than produced by modern seed breeders; most heirlooms originated prior to the 1940s

Open Pollinated (OP): Varieties that are pollinated naturally by the wind or insects, as opposed to those produced with the controlled pollination techniques used by professional breeders; seed from OP plants can be saved year after year because it will grow “true” from seed (appear nearly identical to the parent plant)

F1 Hybrid: Seeds produced by deliberately crossing two distinct varieties; F1 hybrids produce crops with greater consistency in size, appearance, and other traits, but the seed cannot be saved and planted again the following year because it will produce plants with significantly different characteristics than the parent plant

Non-GMO: Seed that is not produced with genetic engineering techniques, which includes F1 hybrids, open pollinated varieties, heirlooms, and any seed with a certified organic label; most retail seed companies advertise their products as non-GMO, but the truth is that there are virtually no GMO seeds on the market that are available to home gardeners – in North America, GMO seeds are used almost exclusively in the context of industrial agriculture.

Pelleted Seed: Seed that has been coated with a biodegradable substance to make it larger and easier to plant; reduces overplanting of tiny seeds, like lettuce and carrots

Additionally, keep a look out for terminology that might indicate a trait that will be particularly useful to you. For example, a “bush type” bean is one that grows low and stocky, making it a good choice for small gardens. There are “patio tomatoes” which also grow short and stocky and have been bred to thrive in a pot.

If you can, talk to your neighbors about what varieties work best for them or contact your local cooperative extension service office for ideas about what to plant.

There’s no harm in choosing a few varieties that you know you’ll have to coddle because they aren’t well-suited to your climate, but it’s wise to stick with locally-adapted crops for the majority of your seed selections.

Follow these basic parameters for best results: First, find your primary gardening window, which is how many frost-free days you have on average each year. (Most vegetables cease to grow at temperatures below 32 degrees Fahrenheit.) To do this, determine the average date of the last frost in spring and the first frost in fall in your area. (This tool is helpful, too.)

Warm season vegetables (squashes, tomato family plants, cucumbers, basil, beans, corn, melons, etc) die with the first frost of the year, so they must ripen and be ready for harvest within the frost-free window. Cool season vegetables (lettuces and most other leafy green vegetables, along with broccoli, carrots, peas, cabbage, and most root crops) survive light frosts, but fade away in summer – unless you live in a northern, coastal, or high-elevation environment with cool summers. In places with hot summers, cool weather vegetables are grown during the spring and fall only.

The “days to maturity” indicated on seed packets and in seed catalog listings gives you an idea of what will grow well in your area. Crops that require more than 90 days to maturity generally don’t fare well in places with short, cool summers, which include many heat lovers like tomatoes, corn, and melons. This is not to say that these crops need 90 frost-free days – they thrive in places that have six months or more of frost-free weather – it’s just that the number of frost-free days gives you an idea of the relative warmth, or coolness, of the climate. Seed companies are increasingly making use of the heat zone ratings published by the American Horticultural Society, which gives an even more nuanced picture of which crops thrive where.

Ordering more seeds than you have room to plant is a common pitfall. Market gardeners and commercial farmers will buy seeds by the ounce or the pound, but home gardeners buy individual packs of seeds. Seed packets and catalogs indicate how many seeds are in each packet, how closely to plant them, and how much space to leave between the rows, so you can do the math and see how much space you can fill with a pack.

Seeds will keep for a few years if stored in a cool, dry, dark place, but a $3 pack of lettuce seeds may have 500 seeds in it, so the average family has a multi-year supply in each pack. Buy six different types of lettuce for variety, and you’ll have far more than you can plant before the seeds go bad. For this reason it’s best to stagger your seed purchases over several years, trying out a couple new varieties of each type of vegetable per year – that way you’ll always have lots of variety, but won’t let as many seeds go to waste.

If you have a very small gardening space, don’t bother with vegetables that sprawl to enormous proportions (all seed listings indicate the mature size of the plants). Vegetables that grow on vine-like plants, such as pole beans, melons, cucumbers, and winter squash will easily take over smaller species planted in close proximity. In small spaces try beets, radishes, carrots, lettuces, garlic, onions, and herbs, which can produce enough to make a worthwhile harvest in just a few square feet.

Gauging the available sunlight in your garden is also an important factor to consider in selecting seeds. You can get away with as little as four hours of sun per day with leafy green vegetables, but most crops need a minimum of six hours, and heat-loving plants will ideally have eight or more hours of direct sunlight in the summer.

Savvy gardeners plot out a planting plan for every bed as they select their seeds each year. Many crops go from seed to harvest in six weeks or less, allowing for repeat sowings throughout the season. Basil, beets, radishes, peas, beans, and arugula are in this category, and any type of greens can be harvested when young and tender. These crops are great for filling the bare ground between tomatoes, squashes, sweet potatoes, and other behemoths of the summer garden. Tomatoes, for example, are typically planted between 3 and 4 feet apart, but the six- to eight-week window that they’re growing from a tiny seedling to a full-size plant is an opportunity to fill the space between them with smaller, faster-maturing crops.

If you’re a new gardener – or are just looking for an easy harvest – stock up on seeds for the most forgiving, low-maintenance crops. There is plenty that can go wrong with crops like tomatoes, squash, corn, broccoli, and bell peppers, while peas, beans, radishes, beets, turnips, basil, and arugula reward even brown-thumb gardeners.

Here are rough guidelines for what to plant when to help in the seed-selection process:

8 to 10 weeks before the average date of last frost in spring: Sow seeds of cool season veggies indoors; plant potatoes, garlic, onions, rhubarb, and asparagus directly in the garden. (These are not typically grown by seed, but the starts can often be ordered from seed companies.)

Starting at the average date of first frost and for 2 to 4 weeks after: Transplant warm season veggies into the garden; sow a second round of seeds for cool season crops directly in the garden.

6 to 8 weeks after the average date of first frost: Sow a second round of seeds for warm season crops directly in the garden.

8 to 10 weeks before the average date of first frost in fall: Sow seeds of cool season crops directly in the garden.

4 to 6 weeks before the average date of first frost in fall: Sow a second round of seeds for cool season crops directly in the garden; plant a second round of potatoes, garlic, onions for harvest the following spring.

Aim to have a balanced mix of the types of vegetables you like to eat in each month and order some flower seed to intersperse with your veggie plantings – they help to balance out the scraggly appearance of some vegetables and many flowering plants also help to attract beneficial insects (those that prey on garden pests). Finally, think about how much you’ll actually use of different types of vegetables and plan accordingly. A couple robust tomato plants can produce way more than a family can eat fresh, for example, but you can make the harvest more manageable by planting a variety of tomatoes for different purposes – fast-maturing cherry tomatoes for snacking and salads, big “beefsteak” type tomatoes for slicing, and “Roma” type tomatoes for canning and making sauce.

The best seed companies to buy from are often small, regionally based operations that specialize in the traditional varieties that are known to thrive in your particular climate and soil type, though there are numerous national companies with a large selection of seed suitable for all regions of the country. Seed quality varies greatly, and 99-cent seed packets are notorious for low germination rates. You get what you pay for, and as with produce in the supermarket, seeds saved from crops grown using organic and sustainable methods command a premium. Seeds that come in resealable packets to preserve viability are worth paying extra for – though storing your seeds in a lidded mason jar also keeps them fresh.

Search this database of seed sources to find seed companies in your geographic area, or check out some of Modern Farmer‘s favorite seed companies below.

Seed Saver’s Exchange: a non-profit seedbank with an extensive selection of heirloom varieties

High Mowing Organics: certified-organic seed company with an emphasis on varieties that thrive in cold climates

Baker Creek: with 1,800 varieties, they have one of the largest selections of heirloom seeds available

Botanical Interests: sells beautifully illustrated seed packets with much more information on each variety than most seed companies

Southern Exposure Seed Exchange: a worker-run cooperative seed company that specializes in varieties for the Southeast and mid-Atlantic states

Johnny’s Selected Seeds: a favorite of market gardeners and small farmers, this company offers both seed packets and bulk seeds